One of the motto of the security is to ensure the security of the information by using the slower method of encryption.

The level security of encryption of value is not as simple as to toss some probabilities and numbers and see what is biggest. For our case, the speed of generation of a hash means nothing really.

For example, let's say the next exercise:

md5 is considered unsafe. Also, the value is trivial so it could exist in some dictionary (and it exist).

I searched on a dictionary with 10 billion entries, and the value is not in the dictionary, but it could be found sooner or later.

But let's try to decrypt our value (with the salt)

Let's say we want to decrypt the password of a table of a database and they are in md5 (and uses a salt).

We could do the next trick: we create a fake account with the value DUMMYPASSWORD: so our hash is d6140cfe07414bb1a614e0cf05a0d0c9, and we need to decrypt the SALT.

So we could test lots and lots of combinations and find a hash that ends with DUMMYPASSWORD.

So, in our example, we found that the generation of the hash is only a small part of the process of "decryption" ($value=md5($i);). However, what if our hash is safer?.

It is transformed into: 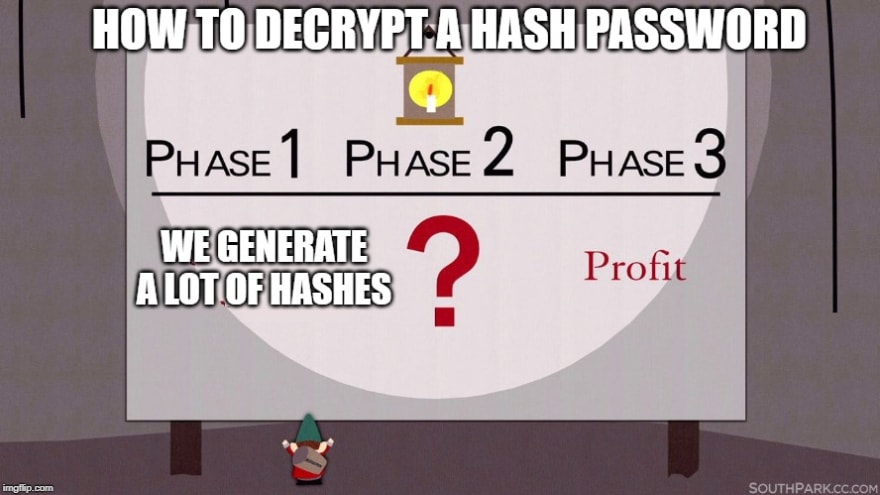 The trick is to find a way to match values. As I said, we could try trillions of combinations of md5, but we must compare those values with "something." Even if we know the original value (and we want to obtain the SALT), then it is not trivial to do that for our simple exercise.

We could ensure our system using sha1 or sha256, but even the old-and-"defeated" md5 could give us a lot of security.

To try to break a password system is not as trivial as to try to break a keylock, mainly because the keylock shows when we succeed in breaking it. Breaking a hash is different, we don't know if we break it or not.

But let's say we want to use md5. ( https://blog.codinghorror.com/speed-hashing/ ) It is an old table so the duration has changed but it means nothing, I will explain.

It means a lot of time. And it doesn't solve the problem of "how to know if a value matches?".

A brief history of application architecture (of the 21st century)

IntelliJ IDEA as a LaTeX editor

4 tools all developers should use

How to Disable Users from Login in Laravel