One thing I've been putting off for a while now, is to extract some of the generic helpers I created in the context of the "ASP.NET Core: From 0 to overkill" series, as well as other things that regularly come to mind, and putting them in some NuGet packages to reuse across projects.

Creating these NuGet packages provides an opportunity to mess around with some interesting CI/CD tooling I haven't had the time to try before.

I did something similar in the past (you can check it out here), so the ideas should be similar, just using different tools and technologies.

To get started, and the focus of this post, we'll set up the NUKE build automation system.

NUKE: what and why?

As briefly mentioned, NUKE is a build automation system, which, like Cake, allows us to define our build using .NET code (another alternative to these two is FAKE, same idea, but focused on F#).

The two main things that draw me to this kind of build systems are:

This time I'm going with NUKE instead of Cake, not only to test out a different tool, but also because it has one trait that seems really interesting: the build is defined in a console application. What makes this interesting is that, even though Cake allows us to define things in C#, it still requires IDE/plugins to support it, and at least the last I tried it, IntelliSense didn't work as well. With NUKE defining things in a console application, the support is there to begin with.

Going through the docs, there's a pretty straightforward procedure to get things going, by installing a global tool and using it to initialize NUKE in our solution.

To install the global tool:

Then we can use it to get things initialized. It provides a nice little wizard, to guide us through the setup. 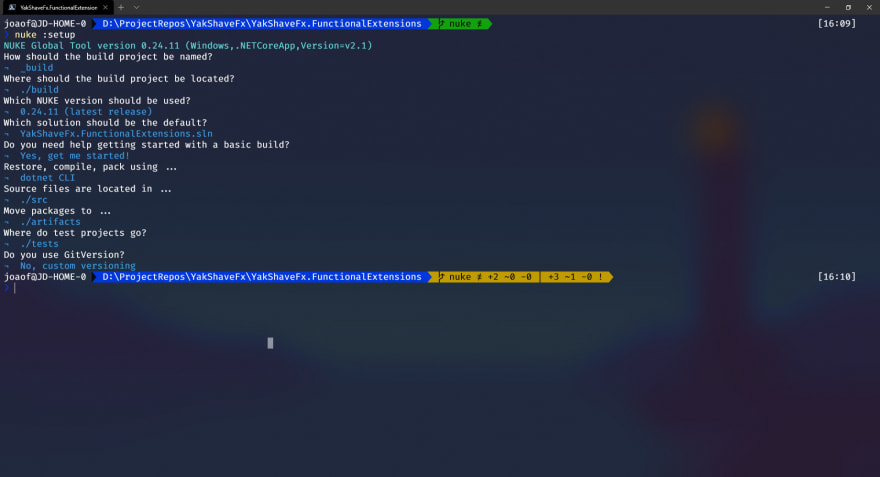 Going through the choices I made:

After finishing the setup, we can take a look at the solution folder to see what went on: 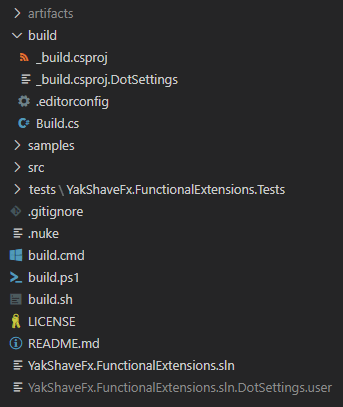 We can see the expected new build project (_build.csproj and other related files), but we can also see that some additional files were added to the repository's root.

The .nuke file marks the root directory and contains the default solution file, nothing fancy, but more interesting than that are the [build.xyz](http://build.xyz) files, used to bootstrap NUKE, either on Windows/Powershell or Unix/Bash. These will be what we use in our CI server (or locally) to kick of a build.

I'm not going to paste the contents of the build.xyz files here, but in short, what they do is check for the pre-requisites, like if dotnet is installed, install it if needed, then run the build project.

We'll see the generated build definition in a minute, but we can run it immediately and see the result, by executing .\build.ps1 (because I'm on Windows using PowerShell right now). 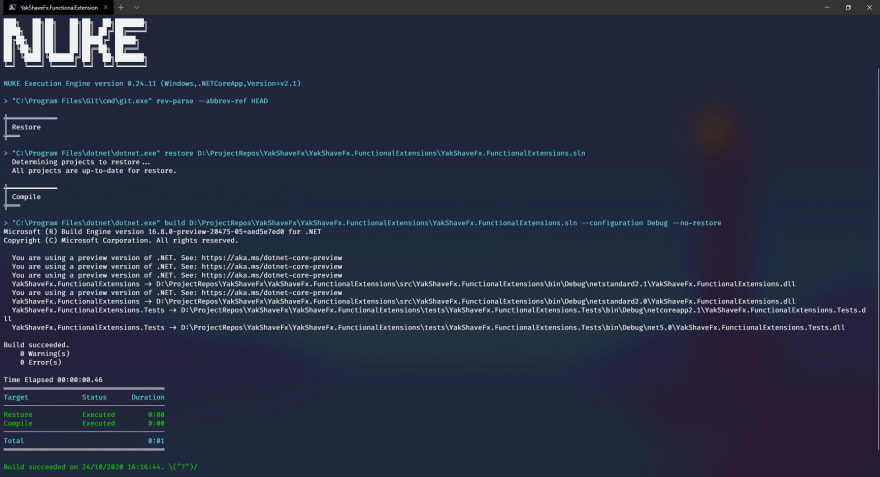 What we get out of the box

In the Build.cs file we have an already fully functional build definition, as demonstrated by the previous execution. It's defined as follows:

The class inherits from NukeBuild, which will provide it with some helper properties and methods.

Then, we have the Main method, the build's entry point, which invokes Execute with the default step Compile, defined later on.

Before the various steps, we have some fields and properties we can use later. Some of the values defined there will be familiar, as we chose them in the initial setup.

Finally, we have the build steps themselves, Clean, Restore and Compile. NUKE provides us with a DSL to configure the build steps using C# code, so we can certainly recognize many of the terms used here from the .NET CLI.

As we can see, Compile DependsOn Restore, so even though the Main method targets Compile, Restore is also executed (as we saw previously).

If we want to target a specific step, we simply pass its name when running the build script.

Having these steps defined out of the box is great, but what we really want is to add more stuff.

In this case, creating a new library, what I want is to run the tests, ensuring all is well, package the library into a NuGet and push it to a package repository. This last step is going to be done in a later post, but the tests and packaging we can handle now.

At the end of the Build class, we'll add two new steps, Test and Pack.

Considering the steps we have prepared for us after the initial setup, creating these extra steps comes rather naturally if we have a good overall idea of what we want to achieve, as we have IntelliSense guiding us through the process.

We start typing test or pack and DotNetTest and DotNetPack appear immediately, so we can continue from there and look for the options we need.

You'll notice the NoRestore and NoBuild being used many times. As we already did those things in previous steps, we can instruct our steps to skip them.

With the new steps ready, we can head to the console and target them with a .\build.ps1 pack. 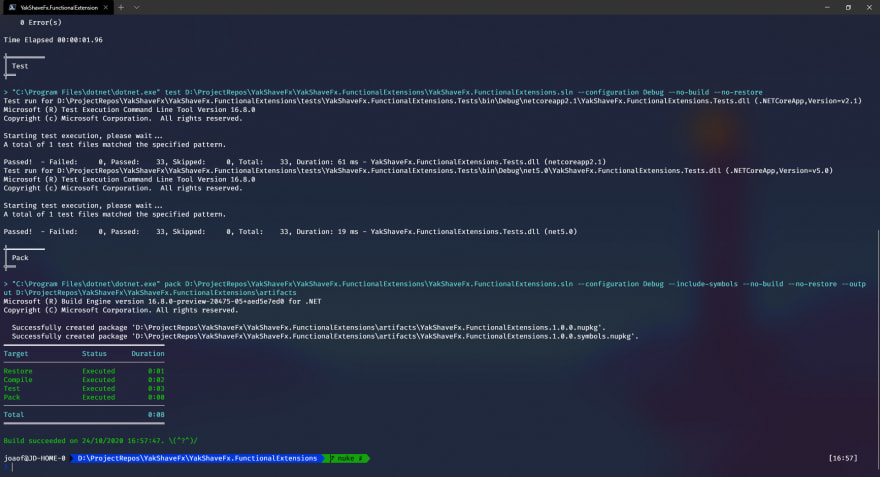 Now, besides what we already had, we can see the test results and that the NuGet packages were created and stored in the previously defined artifacts directory.

That's all for this really quick look at getting started with NUKE to setup a build plan.

We've seen how easy it is to get started, run the build and define some extra steps.

Coming up in a follow-up post, we'll get things running in GitHub Actions

The source code for this post is in the YakShaveFx.FunctionalExtensions repository, tagged as nuke-build.

Using dotnet CLI for Winforms with .NET 6 and .NET Framework 4.8