Today I worked on the JavaScript of my Rock Paper Scissors projects to work with the UI.

I commented out logic of what I'm planning to do, but this is my first time having to work with the DOM events and manipulation so not too sure if I'm doing this correctly. 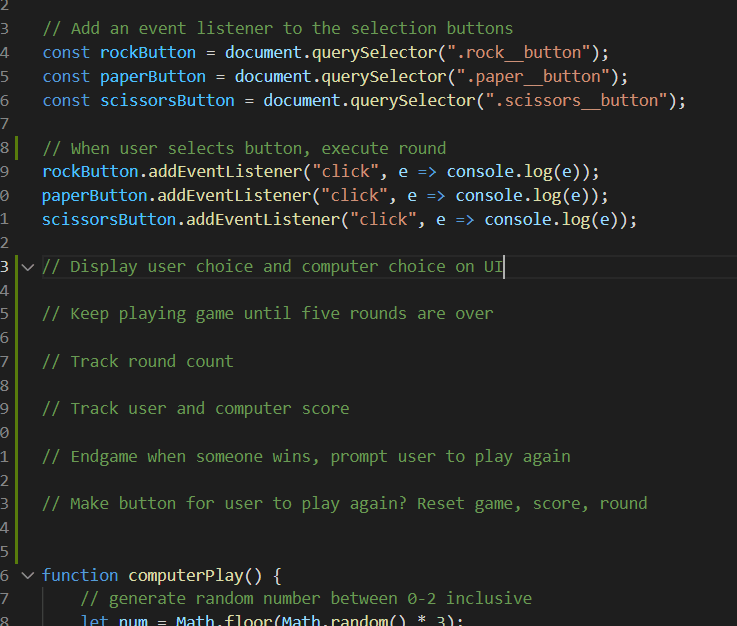 I already added an event listener to the buttons. I understand that once the user selects the button, it should then display the user's choice and computer's choice. Then it will show who won, update score, update round, and clear the choices again in the UI. This process should repeat until the end of five rounds where a winner will be returned or when the user chooses to reset the game. I'm thinking resetting the game might be an add on for later. I plan to have it as a button on the UI. Lastly, the user will be prompted to play again after the five rounds is completed.

So, many things happen once the user selects the button.

If the round reaches five, check the score, display a winner, and prompts the user to play again. If the user chooses to continue the game will reset. If the user cancels....nothing happens? I'm not too sure how that works yet.

Alright, next I will start implementing the function.

Once suspended, jennifer_tieu will not be able to comment or publish posts until their suspension is removed.

Once unsuspended, jennifer_tieu will be able to comment and publish posts again.

Once unpublished, all posts by jennifer_tieu will become hidden and only accessible to themselves.

If jennifer_tieu is not suspended, they can still re-publish their posts from their dashboard.