As already mentioned in my post about Safer Localization in SwiftUI last week, while developing my first serious app using SwiftUI I'm continuously impressed about how fast UI development has become using SwiftUI, especially if the pre-provided views already support your use case. And while of course for any kind of custom UI we will still need to write our custom views combining the existing ones and adjusting them with modifiers and such, I would expect SwiftUI to support at least the most common views that developers might need to present data and accept input from users.

If this were the case, SwiftUI could even be used for prototyping where a "working but not beautiful" version of an app idea could be quickly built and shown to users to verify if the app idea has any chances of success. Also, this way one could also quickly gather feedback on which parts actually need a much better understandable UI (the parts not yet understood well) and which could be mostly kept to the default components with some visual adjustments.

In other words: SwiftUI in my eyes has the potential to make MVP-driven product development much more interesting to many more developers which is definitely a good thing as it saves a lot of time that would otherwise be invested in things that would eventually turn out to fail in one way or another. This goes in line with the Lean Startup methodology which I think is a great way to tackle any kind of new product.

For this to be possible, I would expect SwiftUI to already cover all common types of input that might be needed in forms, like for user registration or other kind of data, as many types of apps in the end are nothing different but a form that accepts input data, transforms it in some way and presents data back in a special way or time. Unfortunately, SwiftUI doesn't seem to be quite there yet.

The approach Apple seems to be taking with SwiftUI is to consider which are the most missing components in SwiftUI and adding some of them each year. For example, this year at WWDC 2020 they added ProgressView, Gauge, Image support within Text and improved a lot of other details of existing views, both for performance and more flexibility. The upside of that approach is, once something is added to the framework, one can expect it to exist and work in the same manner for a long time, so no big code changes are needed with every release (like it was for Swift as a language before Swift 3). The downside is that many components are still missing. And that's where I think the community can jump in to provide temporary solutions that can be easily replaced by official components provided by Apple sometime in the future.

In this post, I would like to focus on one such component and provide my initial solution for it: A multi selector to choose multiple options out of a given set of options. As of now Apple does provide a Picker, but it doesn't support the selection of multiple entries and even automatically leaves the list screen once a single choice was made. So let's get right to it and fix that!

What kind of data structure could require a multi selector? Let's have a look at this example:

The above code renders to this preview:

To show off, how things would work if we only had one goal to serve, we could simply replace our TODO Text entry with a Picker like this: 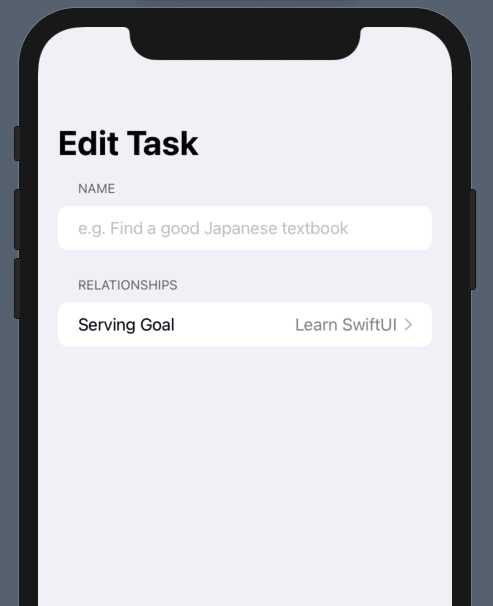 And when clicking the picker, this is the detail view: 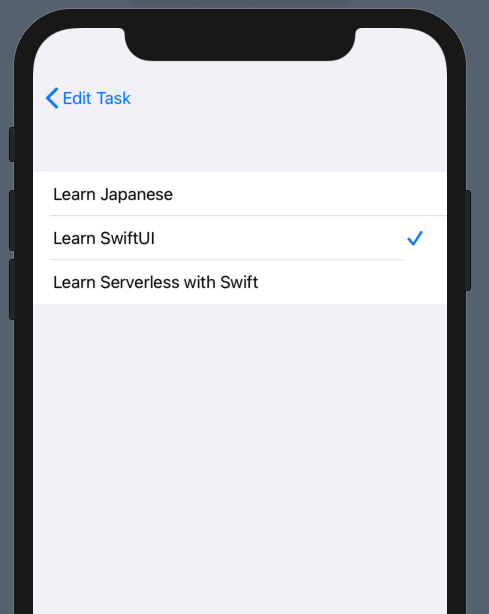 Pretty straight-forward. Note that Goal needs to be Identifiable for this to work, that's why I added var id: String { name } to it in the first place. For our multi-selector we want the UI to actually look pretty much the same, but instead of one, we would like to be able to choose multiple entries.

First, we need to re-create the entry in the TaskEditView, I've chosen the name MultiSelector as the replacement type name for Picker. Here is it's implementation:

Note that I decided to represent each entry with a String, thus the optionToString closure is needed which will provide the String representation of the options type. The call to ListFormatter.localizedString makes sure that we join a list of selected options together in the correct localization format (e.g. ["A", "B", "C"] becomes "A, B and C" for English).

This is the preview code I used for the view:

Note that instead of Goal I used an internal type to make the preview independent from my specific project. This is what the preview looks like: 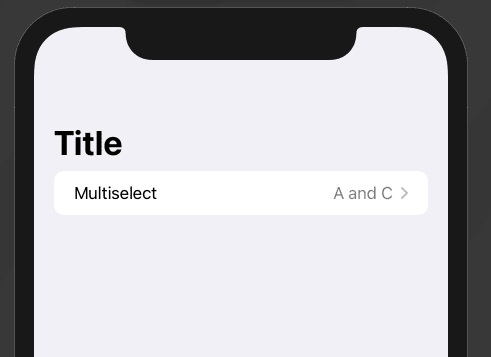 Let's place this into our TaskEditView and see what it looks like in that context by replacing the TODO Text call with:

The preview now changes to this, which looks just as expected: 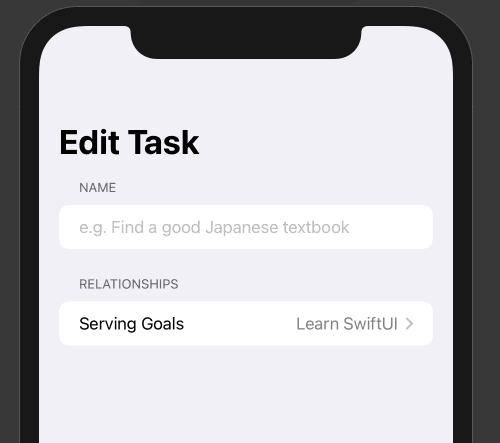 But when clicking on it, we see this, which is not right yet: 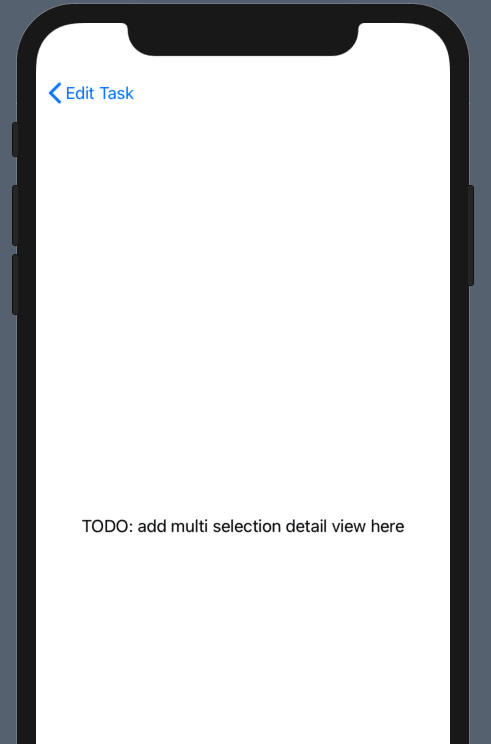 Except for label, this has basically the same properties. But this time, they are actually used, for example when checking if the checkmark should actually be shown by calling contains on the selected collection. When one of the entries is clicked, toggleSelection is used on the entry to remove or insert it into the selected property. For the checkmark, I'm using the SF Symbol "checkmark" which looks exactly like the checkmark icon of Picker.

This is the preview code I've setup for the detail view, note that it's pretty much a copy of the MultiSelector preview:

This is what it looks like in the Xcode preview: 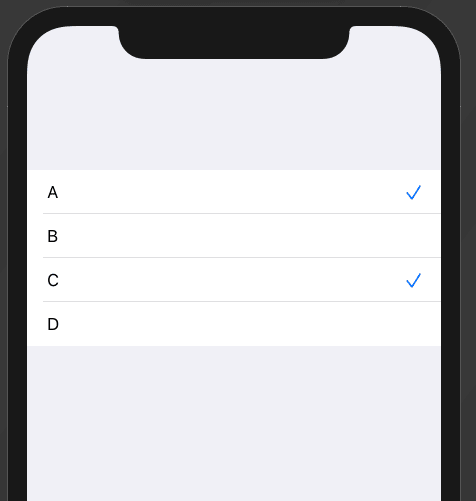 Basically, we're just passing the data onto the detail view. But let's see what our app looks like now in this animated GIF I recorded from the simulator:

I've uploaded the Demo project to GitHub, if you want to just copy the contents of the MultiSelector and MultiSelectionView, you can find them in this folder.

I hope this post helped you and you learned something along the way. If you have any questions or suggestions, please comment below – I'm happy to correct any mistakes I made! :)