Welcome to the first post in my Have you heard of series where I find new and niche technologies then try to explain them as simply as possible. I'll try to explain the problems that they solve, compare them to competitors and figure out who, if anyone, should use these tools.

Volta is a "the hassle-free JavaScript tool manager". What does that mean? Well, it helps you to manage multiple versions of node, npm and yarn for your projects and conveniently switch between them (hence "hassle-free").

It can be installed with a single line and comes with automatic setup and completions for popular shells. Go ahead, try it now:

It's the age-old problem of "it works on my machine". This occurs frequently when multiple people are working on a single project such as in a large enterprise or open-source.

First, volta install, it does what it says on the tin. It installs a specific version of a tool globally e.g. volta install node@12. This becomes the default on your machine which is used as a fallback for any projects that don't specify a version.

Secondly, volta pin allows you to set a version of a tool for the current project e.g. volta pin node@14. This gets stored in the package.json and is shared between all developers.

Here's the cool part, Volta automatically switches your toolchain whenever you change directory 🤯 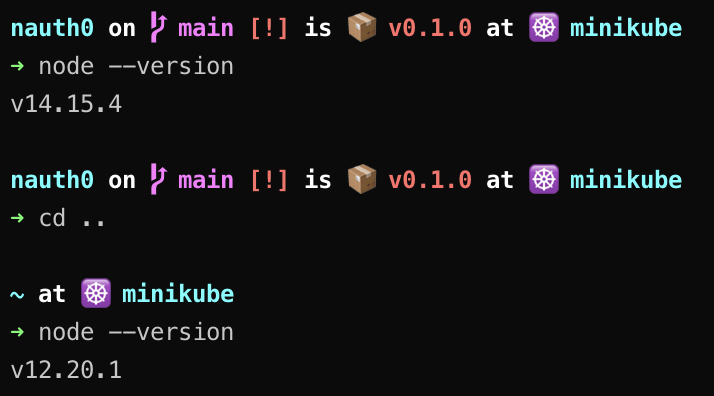 If you don't have the required version installed, then Volta installs it for you. This happens whenever you try to use the tool for the first time.

Here's a couple of projects that I've used Volta with:

I've also found that Volta works well in CI (example), there's even a Github Action for it 🥳

NVM is a popular tool for managing multiple Node versions on a single machine. I've used NVM for a long time before now, and it's served me well.

NVM can detect the node version for a project using a .nvmrc file, but you have to manually call nvm use to switch versions or manually configure your shell to do so.

Volta also feels a lot more responsive, this is my opinion, and I'd suggest trying out both.

When you think about solving the "it works on my machine" problem, you probably think of Docker. And you should, Docker is awesome. It solves the problem, works great with CI and containers are a popular deployment target (ECS & Kubernetes).

However, it does have a much greater learning curve than Volta, and the development workflow is a lot slower, with time spent waiting for Dockerfiles to build. If you're not already using containers in your workflow, I'd suggest using Volta!

Volta makes a great tool for any solo developer but it also fits in with large organisations. In addition to the problems we've already discussed, Volta also makes onboarding a breeze:

Volta can be configured to fetch binaries from other places such as your company's private registry. It even includes support for monorepos! That thing that all the cool companies are using.

We're all in this together 🎶 and Volta is no exception.

I've tried to describe Volta very briefly, and from a high level, so much of the specifics have (deliberately) been glossed over. If you want to learn more about Volta, see their top-quality documentation.

Have a great day ❤️

How to create a blog website with React & firebase -> Series

A great component library to boost your performance and speed: Chakra UI

Jamie Davenport
RegEx Validation: A Cheatsheet (most used)
#javascript #java #php #regex
Github copilot is out of beta, would you use it ?
#discuss #programming #productivity #github
Aspiring Developers - What is your greatest achievement in programming?
#discuss #webdev #programming #beginners