All my articles are first published and hosted on my blog - you can find this article here. You may also be interested in my tweets on my Twitter profile and my monthly newsletter. 🔥

Do you know someone who stutters? I stutter. My stutter doesn't hold me back from being a developer.

What is a stutter?

A stutter, which can also be more formally known as a stammer is a type of speech impediment that occurs when:

The severity of a stutter can vary based on:

Anyone can stutter, some people are diagnosed with it. Why?

Not everyone is perfect, some people who are not diagnosed can still have an occasional stutter - a really common example is when they're scared (E.g. "G-g-ghost!"). But some people are diagnosed with it by a professional speech therapist, like myself. There are two types of stutterers:

I've had developmental stammering since I could talk and it's never gone away... But, it has gotten a lot easier.

Childhood is where the majority of stammers occur. But most of them will fade away over time, some will not.

My childhood was difficult because no-one really knew what a stutter was and let's face the facts, kids are mean. It's true. If you are different, you get picked on.

My stutter was the worst in my younger years - I was stuttering on literally every syllable (E.g. "Hhhhi, mmmy n-n-n-n-name i-is J-j-j-jack."). Very few people could understand what I was saying, because by the time I'd finished the sentence, they'd already forgotten what I said at the start.

I attended speech therapy for 10 years, between the ages of 5 and 15, where I learned various speech techniques. We called my stutter, "bumpy talk" 😅. You wouldn't notice a stutterer using these techniques unless you were told about it. Some techniques were:

These are really useful to help overcome stuttering but almost always we have to decide the best technique for a situation almost instantly - we don't have time to plan our conversations.

I let my fear hold me back from nearly everything - speaking in school assemblies, school plays, to friends and family, on the phone, on Xbox Live etc.

By 15, I was nearing the end of my monthly speech therapy and was a lot more comfortable with speaking:

I used to get offended when someone made a little joke and genuinely was curious about my stutter - I instantly thought they were making fun of me. I learned to become immune to being offended because in fact, they were not trying to offend me. Some people are really interested in my stutter and I am always happy to answer any curiosity they may have. But, I've learned to joke with people and make jokes about stuttering too. For example, I joked that I would be a perfect voice actor to sing the theme tune for Dora the Explorer ("D-D-D-D-D-Dora...") - A children's TV show that encourages adventure and learning Spanish.

I used to tell people I stuttered before engaging in a conversation - I no longer do this. I will engage in any conversation, and if I'm asked if I stutter, I don't get offended, I don't get upset or embarrassed, I straight up say, "Yes, thank you for noticing" 🙂.

Getting older, my stutter, my attitude towards my stutter and other people's responses to my stutter have greatly improved and I am eternally grateful for that! 🙏 As a child, other children would laugh at my stutter, but it's obvious as an adult that's no longer the case. Don't get me wrong though, I do encounter the odd person who decides to shame me for my stutter but I learned to ignore the hate a long time ago.

I don't let my stutter hold me back from anything anymore - and I mean nothing! I will happily make a phone call, talk up in meetings, do public speaking if I had the opportunity, and many more speaking activities because I'm not embarrassed of my stutter and I won't let it prevent me from being where I want to be.

Working with someone who stutters

I turned to my colleagues prior to writing this article because I wanted their opinions on what it's like to work with me (someone who stutters). Some of my colleagues have asked to remain anonymous but were happy for me to use their response and I have respected their decision.

Hi all, bit of a strange request but I appreciate anything, good or bad!! I want to write an article about stuttering in the workplace (title to be confirmed). On Twitter, I've had fellow stutterers approach me asking how I work, etc. So I thought I'd write an article to help raise awareness and raise their spirits. I'd like to write a section with quotes about how people who work with me feel. So, what's it like working with someone with a stutter? Did it take you time to get used to? Did you have to ask me what the right thing to do is? Thank you in advance! I can reference you in the article, but if you'd rather it be anonymous, that's ok too. 😊

I would say that for me, it's fighting the urge to not complete words or sentences on your behalf. To do so would be rather presumptious, at least to my mind. My internal monologue gets to a point where I'm chivvying you on, "Come on Jack, you got this. Spit it out man!" 😃

I had a good friend when I was a teenager who had a stutter. We used to play Quake at LAN parties together. He had a specific trigger that made him stutter. In his case it was when he was about to say something hilarious. The more he stuttered the more we knew the punchline was going to be a killer, so we waited with baited breath for it. He never disappointed. I guess from that experience I know to simply wait patiently. Hope that is the right thing to do.

Sometimes there's an urge to complete a word/sentence. 😅 I obviously ignore that urge. Also that's a solid idea for a blog article. 👌

Sometimes I feel awkward for you, like I'm willing you to get through it, but that feels like my issue and not yours. I'm always impressed by how you don't let it stop you speaking out, I'm much shyer in meetings than you are.

This discussion has prompted me to read up about stuttering and it's quite fascinating. I was a stutterer at nursery age, but it just seemed to go away after a few years. Apparently this is quite common, over half of childhood cases spontaneously resolve. I never really considered asking you how I should deal with your stutter, but that's the same way I wouldn't ask a non-native English speaker how to deal with the fact that their language isn't 100%. We just adapt and deal with it, and don't really give it much thought.

At first I thought it was nervousness but then I realised it was a stutter. It didn't take me long at all to get used to it but I am a quiet person and usually listen rather than talk. Though your last question made me realise I should have asked you about it rather than assumed, so apologies for that, I am always worried about asking and being rude.

Some interesting and honest responses here. Some I predicted, some I did not. I understand a stutter can put fellow colleagues (or anyone for that matter) in an awkward position because they don't really know how to approach it. I want to say thank you to my current colleagues for their responses above and that you've done nothing in the wrong at all, you all approached it in your own way. 💪

How can I help someone with a stutter?

This is the single most asked question I get about my stutter 😅. So, here are some common things we stutterers appreciate:

Keeping these key points in mind can ensure a healthy conversation 😊. 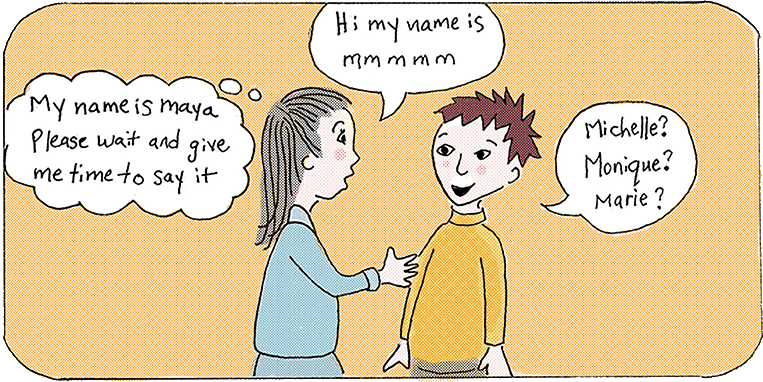 I take my stutter with me everywhere I go. It's been by my side through school, extra-curricular activities and work. I've demonstrated it to my friends, family, colleagues and strangers I happen to be in conversation with. For most stutterers, school is the hardest part because you're prone to being made fun of - I was often greeted with "Hey J-J-J-Jack, HAHA". Working in retail and an office environment, I can honestly say I've had no issues at all, except maybe a few incidents in retail. I'd expect no issues from an office because it's more of a formal environment, however I was expecting some negativity working in retail. The only issues I encountered in retail are when I encountered a customer who was initially not particularly happy when they entered the shop. They'd approach me demanding, "Show me where these are [them showing me an item of clothing they've previously purchased]! I want an exchange." This instantly shocked me and raised my stress levels, I would often stutter in these situations, with one man storming off saying, "For God sake, I haven't got time for this." But for the most part, I never encounter any issues with anyone. 🙂

Stutterers in the wild

Below are some resources about stuttering that I really like.

King George VI of England and The King's Speech

His majesty, King George VI, reigned during World War 2. He became king when his older brother, King Edward VIII resigned in 1936. King George had a stutter which made him afraid of becoming King. A movie was released in 2010 called The King's Speech, which is one of the most inspiring stutter stories, in my opinion.

Porky Pig stutters because his voice actor stutters, Joe Dougherty. I could relate to Porky Pig as a child because of my love for Looney Tunes and because I also spoke very fast and didn't think about what I wanted to say. Watch Porky Pig's debut here.

Fermat Hackenbacker is a fictional character from the TV show and movie, The Thunderbirds. I really like this scene between Fermat and his father, Brains.

This icon needs no introduction, but, did you know he used to stutter? You can watch an interview here. They say some stutters have a trigger, a word or phrase they say when they get annoyed at stuttering. Mine used to be "sugar!" Samuel L. Jackson's trigger is a little more... explicit. "M*th*rf*ck*r" is his trigger word, which is part of the reason you hear him saying it a lot in movies; it's like his catchphrase.

All politics aside, Joe Biden is a very inspirational man when on the topic of stuttering. I really love this speech he did.

Drew Lynch is a late stutterer due to a softball injury, but he turned his stutter into a positive. He entered America's Got Talent and did extremely well!

Woman in the audience on Steve Harvey show

This article was written because I've had a few people message me who also have stutters and I wanted to help them realise it's OK to stutter. So many people get really far in life with a stutter because they don't let it hold them back. 💪

A front-end developer with a passion for UI/UX & accessibility.

Being a Junior Dev in the Time of COVID

Jack Domleo
A front-end developer with a passion for UI/UX & accessibility.
How I optimised my online presence to get opportunities.
#career
Course review: 'Create Your Following' by Danny Thompson
#career #twitter
Monthly Reflection - July 2020
#career #productivity