Last week we just brushed the surface of Vuex in my tour de force blog Vuex with Ex-View (cast members). In that blog we set up a very basic Vuex store like so:

But there is a lot more to the Vuex store than just state. The Vuex store is made up of the global state, as well as Getters, Actions, Mutations, and any Modules you've created to organize the various parts of your store. I won't be covering Modules in this blog, but you can learn more about them in the official Vuex docs Modules section.

Let's now include Getters, Mutations, Actions, and Modules in our Vuex store. 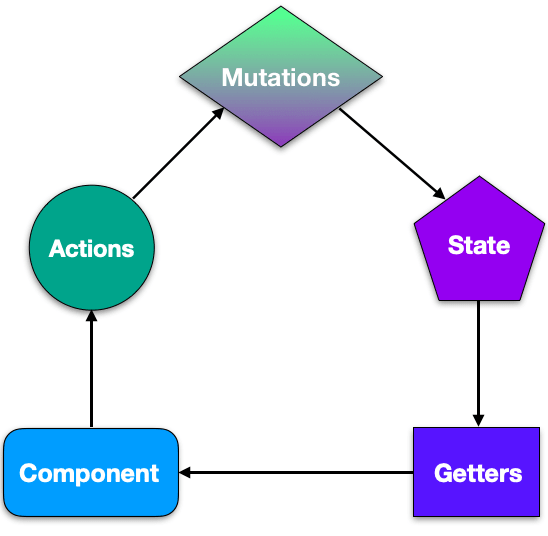 Getters are the go between that get (get it?!) access to the global state for the components in your application. If you have experience with React and Redux it might be useful to think of Getters like the mapStateToProps function. If you have experience with React Hooks think of Getters like useSelector (p.s. I wrote a blog about Hooks awhile back that you might be interested in checking out - Looky Looky, I Wrote About Hook(s)y.

When a component needs to change the global state, actions and mutations are the middlemen. You technically don't need Actions to update the global state, but Mutations can only run synchronously while Actions can perform asynchronous changes and so it is best practice to first dispatch an action, then commit the change to your state through a mutation. For those of you with React / Redux experience think of Actions like mapDispatchToProps (for all you Hooks-inators think useDispatch) and mutations are the updates/changes that you make to state in the reducer.

Accessing the Vuex store in your components

There are a couple of helpers for accessing Getters and Actions in your components.

I've learned a lot about Vuex over the past couple weeks and I hope you have too. I've also learned that I might have an unhealthy obsession with The View, and I hope you do too.

Here are some great resources that contributed to the growing of my mind grapes:

Enough JavaScript to get you Started : #2 Evolution of JS

Build a REST API with Node, Express and MongoDB