Some time ago GitHub, has announced the new feature, GitHub Codespaces. It gives an ability to run VSCode in the browser, with almost the same power as it would run locally on your machine, but also with a power of clouds, so, you are able to choose the machine type with up to 32 CPU cores and 64 GB of RAM. 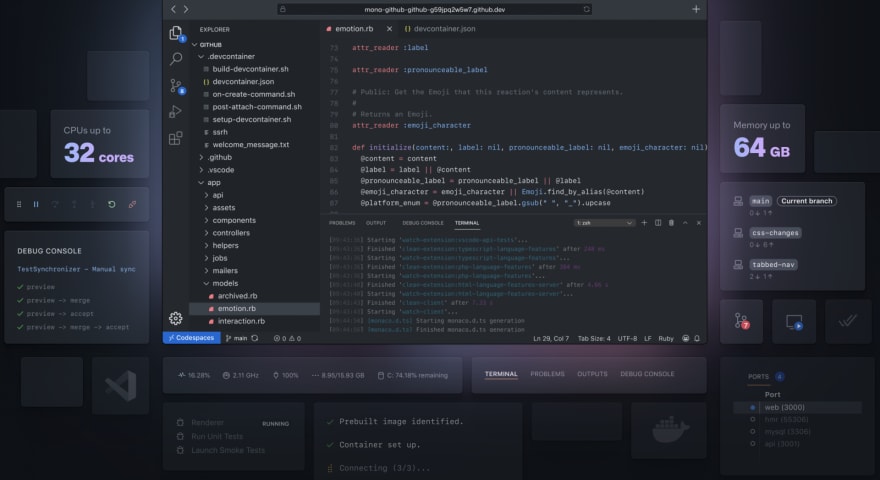 Looks impressive, is not it? But how it could help us, to work with projects driven by InterSystems IRIS? Let's have a look, how to configure it for us.

Simple start for any repo

With this feature, you'll be able to edit any repository in the cloud, by Code button. Please note, that this feature is still in beta, and may not be available for everyone, and after a beta period, will be available only for paid accounts. 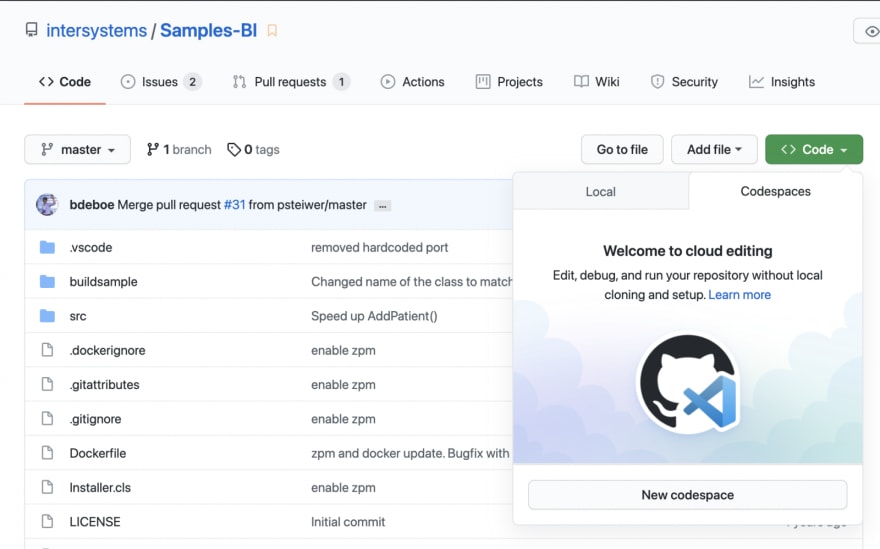 So, this, repository has not been specially prepared for Codespaces at all, just for VSCode. Press New codespace button, to create an environment just for you. 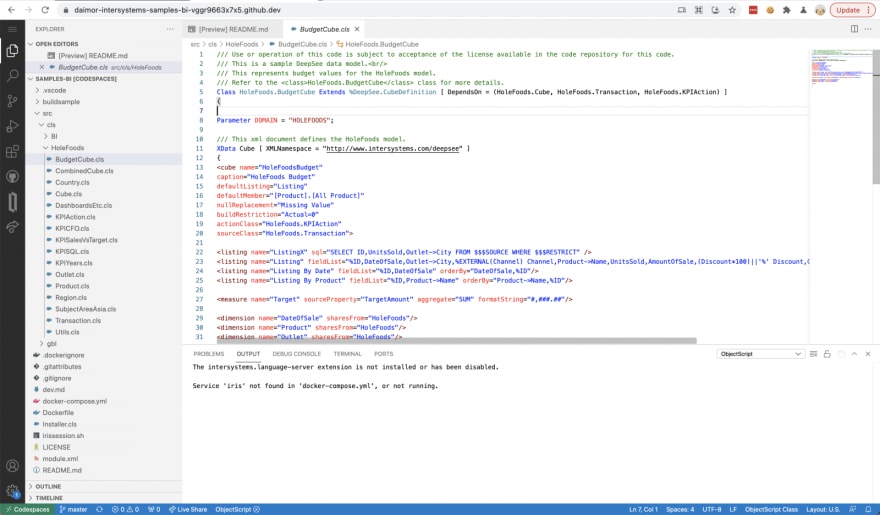 In my case, in the previous usage of codespaces, I've already installed the ObjectScript extension and enabled it globally by prompt from Codespaces. So, it installs it to me every time, and ObjectScript code already highlighted. But thee IRIS there is not available, yet. Let's start it with docker-compose.

After that, now we are able to connect to IRIS Terminal, and compile the code

Ports from docker-compose are automatically recognized and can be opened in the browser, so, it's also possible to open System Management Portal

We managed, to run VSCode and IRIS in the cloud, but we had to do some things manually, to get get it ready. But, it's also possible to make your repository ready for development right after the start.

It is possible, with devcontainer.json. I will do an example based on one of my recent projects Realworld. This project is quite complex, it has a backend and frontend and uses docker-compose to start all it together.

devcontainer may use docker-compose as well, so, my config appeared to be like this.

There are many things configured

Starting Codespaces for such repository, will take a bit more time, as it will needs to build all the necessary containers and start them. GitHub says, that it will be possible to prebake such images after any push to the repo, so, such start will be faster. 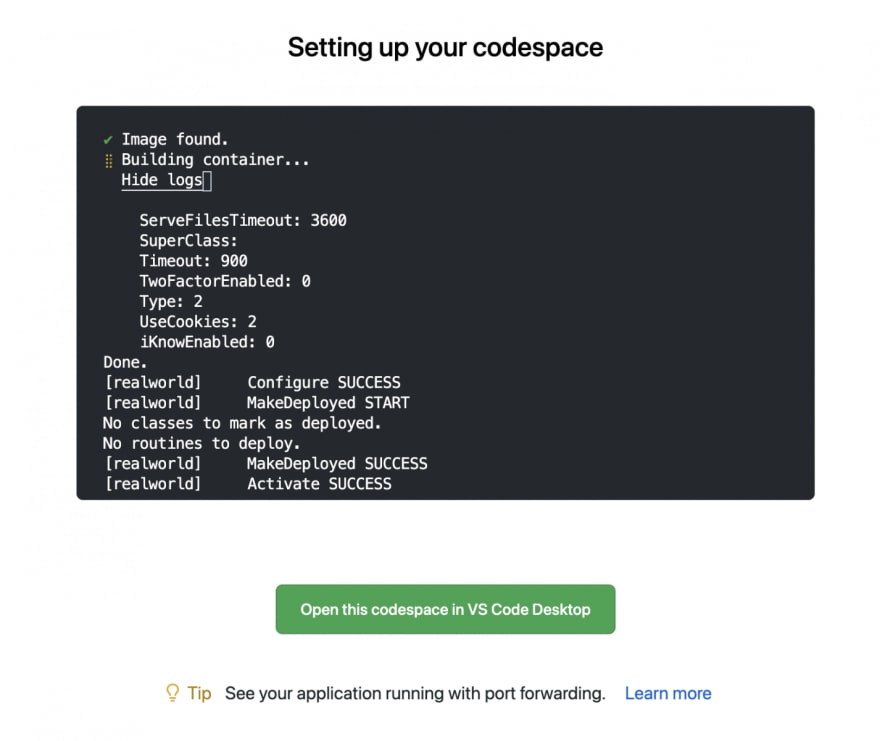 And when it started, no more actions needed, it's ready for development 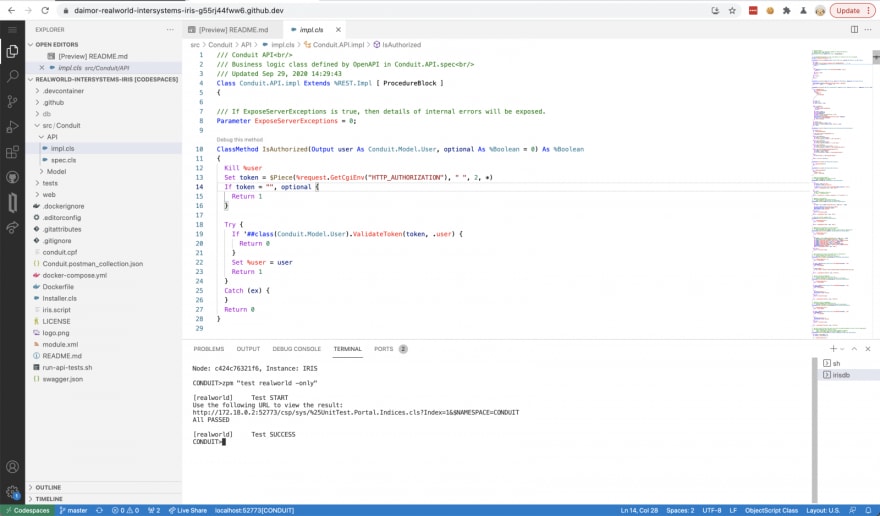 This project has an option to test REST API with prepared Postman tests, so, I've installed npm and newman inside the backend container with IRIS. And it's possible to run this tests there. All passed, well done. 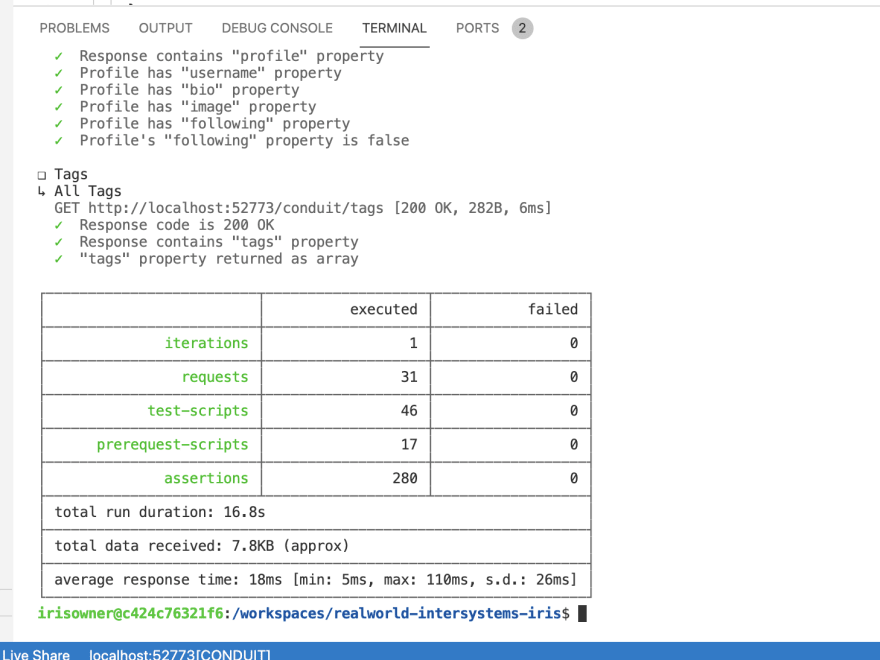 And frontend part is available

GitHub allows to connect to Codespaces, from the local VSCode as well. When you press by green Codespaces in the corner, you may choose to open in VC Code (GitHub Codespaces extension have to be installed)

And here it is, it's the same project, opened with your local VSCode, but running in the cloud, as you may see the result of ifconfig, I'm definetly not in Singapore, right now. 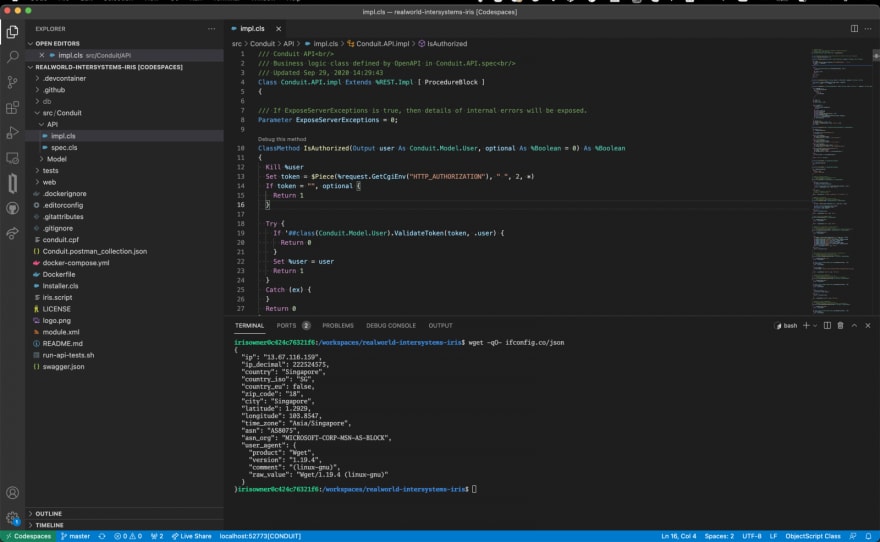 In browser but without GitHub Codespaces

What about if you don't have access to Codespaces feature, or don't want to use it by this way, but still would like to try VSCode in the browser.

Well, it's possible with another project code-server

You can simply run this VSCode with this command

It will run, the default version of VSCode, with no folders mapped inside, just mount any folder, and set it as the workdir, and you will see it inside. 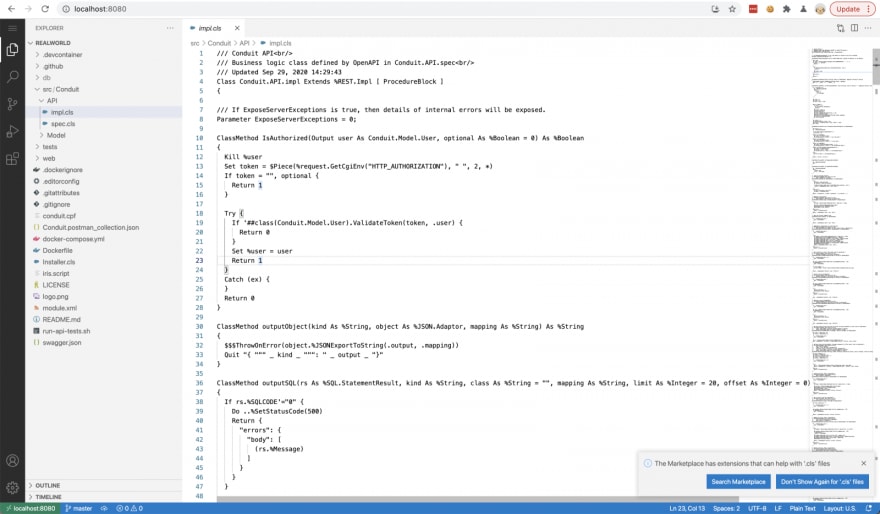 It's default VSCode, with no ObjectScript Extension installed. It has a limitation with extensions, it does not have access to original VSCode marketplace, instead it uses another place, open-vsx.org, and the main ObjectScript extension is avalable there as well.

With Dockerfile like this, we can bake our own Code Server, with anything installed there, as well as some extensions already installed

You may define, some default settings.json for user-level and if some extensions you need not available on open-vsx, download them manually, place them to extensions folder next to Dockerfile, and you'll get them installed as well.

And Syntax highlighting already there, the only thing is left, to run IRIS itself, and it can be done with extended docker-compose, where code-server will be just as another service next to IRIS 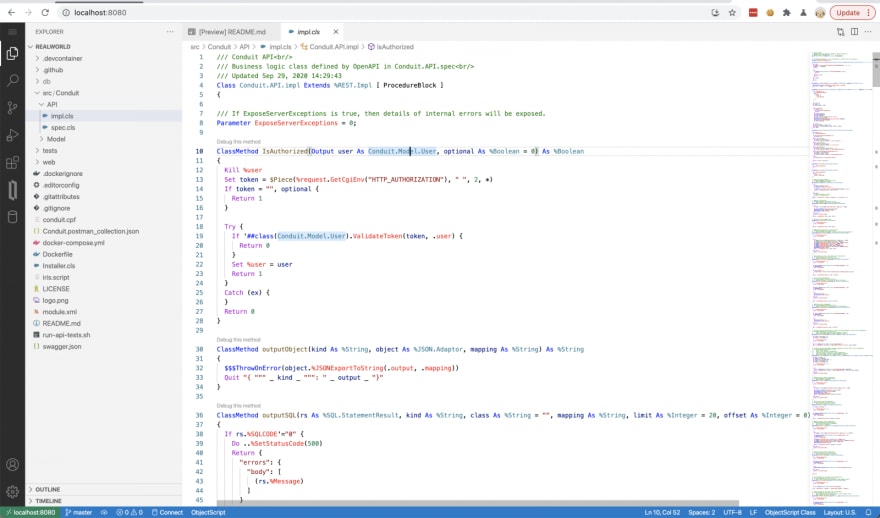 Shipping to Production - Final and Next

Once suspended, intersystems will not be able to comment or publish posts until their suspension is removed.

Once unsuspended, intersystems will be able to comment and publish posts again.

Once unpublished, all posts by intersystems will become hidden and only accessible to themselves.

If intersystems is not suspended, they can still re-publish their posts from their dashboard.

Once unpublished, this post will become invisible to the public and only accessible to InterSystems Developer.

Thanks for keeping DEV Community 👩‍💻👨‍💻 safe. Here is what you can do to flag intersystems:

Unflagging intersystems will restore default visibility to their posts.