If you haven't seen it there is a fun and interesting article by @endingwithali on how FAANG came to be and a better suggestion of FANMAG to describe big tech.

Go give it a read then come back here (their article is actually well written and informative...unlike this one)! 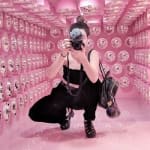 FAANG is Over. It's a FANMAG world now. (The History of FAANG)

Now if you can't tell this post is purely satire! Oh and if you don't quite get it there is a section at the end explaining as it is a UK slang term.

FANIMAGNET is used to describe big tech. It stands for:

Why should we use FANIMAGNET to describe big tech?

Those are the reasons I can think of, aren't they good enough?

How can I use FANIMAGNET in day to day conversations?

"Look at Becca, they really get drawn to FANIMAGNETs" - used to describe someone who worships big tech!

"John really wants to be part of the FANIMAGNET elite, but it isn't so easy to be accepted" - used to highlight the difficulty of getting into big tech

I don't get the joke?

"Fanny" in the UK means vagina not bottom as in the USA.

"Fanny magnet" is a term to describe a man or woman who attracts attention as they are extremely attractive / alluring / confident and people always seem to want to sleep with them.

It also works for gay men as we then adopt the American meaning of Fanny, so it is an inclusive term too 😋

Really? A conclusion...I suppose the conclusion is I said I wouldn't clutter your feed with sh*tposts but I am just too immature to let this pass.

I promise this will be the last useless post I write for a while, other than the "abusing the internet" series of course! In case you missed the latest instalment of that series here it is:

😲 ZERO CSS and just a single image to build a fully interactive SPA???!!?? 😱 Abusing the internet once more! [Extreme SSR!]

Oh and please, do not give this post any hearts or anything, it isn't something I want to see on "top posts of the week" 🤣

Have a great weekend everybody!

InHuOfficial
Specialising in accessibility and website load speed / performance. Proud to be part of the awesome team over at daily.dev
So I got a job 🎉...and I am as shocked as you are! 🤯
#watercooler #writing #career #webdev
I Am Warning You Don't Click!
#watercooler #discuss #html #meta
It *IS* possible to get a voice here! [tips to grow on DEV.to + a mini rant!]
#writing #discuss #watercooler #meta