Selenium 4, the latest version of Selenium, is currently available in the Alpha Version. There has been a lot of buzz around the release of Selenium 4 Alpha features, as it is packed with salient properties like relative locators, improved Selenium IDE, and improved Selenium Grid design that introduces a ‘fully distributed mode’ for automated Selenium testing. Apart from these visible changes, a major under-the-hood (or architectural) change is that WebDriver APIs in Selenium 4 follow the W3C (World Wide Web Consortium) in its implementation.

Here are some questions that might come to your mind regarding Selenium WebDriver APIs becoming W3C standardized in Selenium 4:

This article would help answer these lingering questions as we deep dive into what W3C compliance in Selenium 4 means for the Selenium framework users.

As mentioned on the W3C website, WebDriver is a remote control interface that enables introspection and control of user agents. It provides a platform and language-neutral wire protocol so that our-of-process programs can remotely instruct web browsers’ behavior.

WebDriver provides a set of interfaces that aid in controlling the behavior of a user agent and discovering & manipulating the DOM elements on web pages (or documents). Apart from Selenium, WebDriver APIs are used in other automation tools like Appium, used mainly for mobile applications’ web testing.

Stable support for the W3C protocol was added in Selenium v3.8 through Selenium v3.11, as seen from W3C related patches in Selenium’s latest stable release (i.e., Selenium 3.141.59). The Selenium project had plans to migrate to an entirely new protocol – W3C and the same is happening in Selenium 4.

All the recent browsers (e.g., Chrome, Firefox, Safari, etc.), including Internet Explorer, are considered W3C compliant. With Selenium 4, you may no longer require to add ‘tweaks’ in the test script to make it work across different browsers, as everything (i.e., browsers & WebDriver APIs) will run in the W3C standard protocol.

With WebDriver becoming completely W3C standardized, you can now use it across different frameworks without compatibility issues.

Communication Between The WebDriver and Browser

In Selenium, the WebDriver offers a set of APIs that lets you discover and perform relevant operations (i.e., click, sendKeys, etc.) on the web elements present in the document (or page). A secure connection with the web browser is established using the corresponding ‘browser drivers.’ The browser is the end-point of execution.

As communication is happening between the web browser and Selenium WebDriver, both the parties should follow a set of rules (or protocol) that can be understood. With Selenium 4, the WebDriver and browser follow the same protocol (i.e., W3C), offering numerous advantages compared to the WebDriver used in versions before Selenium 4.

For Selenium versions earlier than Selenium 4, the JSON Wire Protocol was used for communicating with the web browser from the local end. As the Selenium Client libraries (i.e., Client) use the JSON protocol, and the web browser uses the W3C protocol, API encoding and decoding was involved in the entire process.

‘WebDriver W3C’ is the newly introduced protocol in Selenium 4. It has received an endorsement from W3C (World Wide Web Consortium), the community which works on web standards development. W3C Working Draft and W3C Editor’s Draft are excellent resources to keep a tab on the progress of WebDriver W3C Protocol.

In Selenium 4, WebDriver W3C Protocol replaces the older JSON Wire protocol. It essentially means that you no longer need to encode and decode the API request using the W3C protocol, and the tests can directly communicate with the web browser. The information will not be transferred by sending and receiving HTTP requests and HTTP responses, respectively. 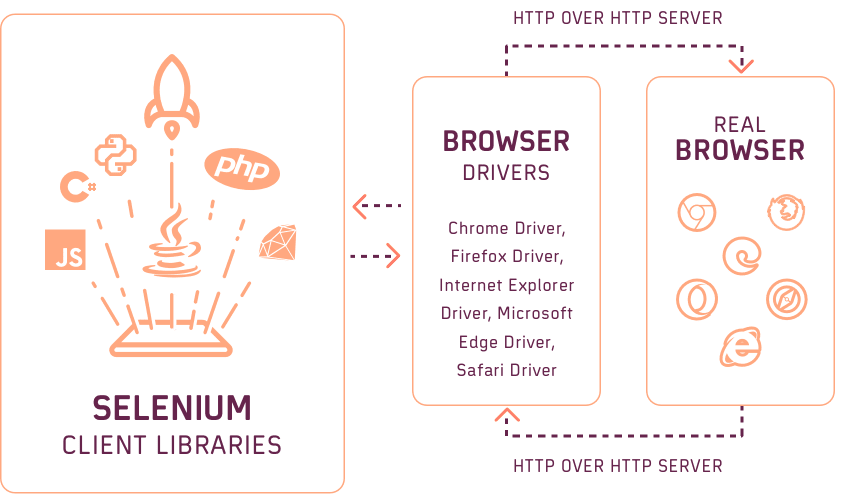 As seen from the architecture of WebDriver W3C Protocol, there is a direct information exchange between the client and server, without the need for the JSON Wire Protocol. As Selenium WebDriver and web browsers use the same protocol, automated Selenium testing will execute tests more consistently between different browsers. Flakiness in web automation can be considerably reduced if a standard protocol is used.

The introduction of WebDriver W3C protocol offers several advantages, including the following:

However, the native support for Opera and PhantomJS is removed since the WebDriver implementations for these browsers are no longer under development. The fallback option for Opera users is the Chrome browser, as the Opera browser is based on Chromium. For PhantomJS, users should use Firefox or Chrome in the headless mode. W3C WebDriver Protocol is one of the prime reasons to upgrade to Selenium 4!

The JSON Wire Protocol is marginally different from the WebDriver W3C protocol. If you are using Selenium 3.141.59 – the latest stable Selenium version, you might already be using the new protocol.

The JSON Wire Protocol will permanently retire in Selenium 4. The Selenium Changelog is an excellent resource to keep track of the changes in Selenium WebDriver from a W3C compliance point of view.

The major difference is how a new session is created and how element interactions are performed using the Actions API. A look at the WebDriver W3C running document and now obsolete JSON Wire Protocol documentation shows that there are changes in error codes, data structures, and response status codes.

From a developer or automation tester’s perspective, in ideal scenarios, no changes are required in existing test scripts to make it run with the WebDriver W3C protocol.

Impact of WebDriver W3C Protocol on an existing implementation

The changes are transparent to the developers and automation testers of the Selenium framework. The wire protocol level changes are supposed to enhance the API level owing to which tests would be less flaky and uniform across different browsers (and versions).

For example, ChromeDriver version 75 onwards runs in the W3C standard-compliant mode by default. Developers and users of the Selenium framework had faced few issues with their tests, but the issue was fixed after updating the respective ChromeDriver.

Here are the screenshots of automated Selenium testing using ChromeDriver (version 86.0) executed on a local Selenium Grid (version 3.141.59). By default, it is using the WebDriver W3C protocol for communication.

For users of the cloud-based Selenium Grid facilitated by LambdaTest, Selenium’s migration to WebDriver W3C protocol should not cause any impact. No changes are required in the existing automated Selenium testing scripts, as LambdaTest chooses the appropriate Selenium WebDriver protocol to work without hassles.

Here is a screenshot of a Selenium automation test executed on the cloud-based Selenium Grid by LambdaTest: 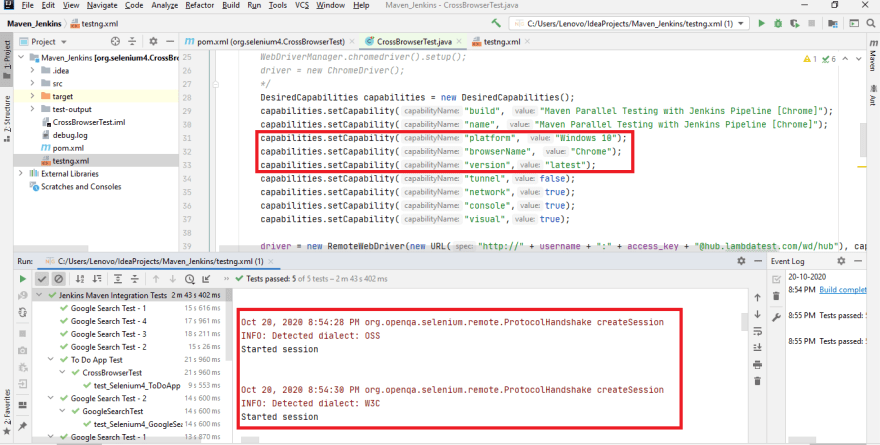 As seen in the screenshot, the WebDriver W3C protocol was used for automated Selenium testing.

To summarize, Selenium 4 Alpha features like W3C compliance will offer a host of benefits to the entire Selenium community. Till then, we wait for the release of the stable version of Selenium 4.

In what order does Jest execute tests anyway? (And how to change it!)

The three A’s of Unit Testing

Why testing is important?