The fourth woman in my series is jet propulsion engineer Yvonne Brill. Yvonne was a distinguished and award-winning rocket and jet propulsion engineer. Her work not only contributed to the reliability of systems used in space exploration, but she returned to her research after raising a family in a time when this was not the norm. 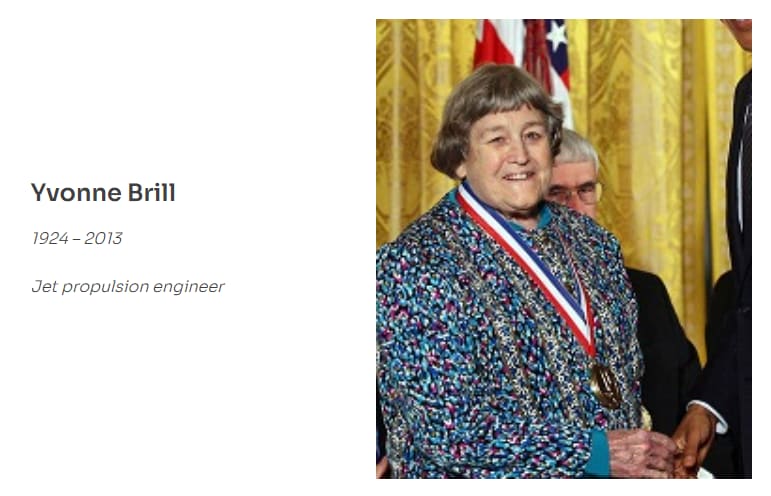 Yvonne's career began in the field of mathematics and chemistry before moving into rocket science. She was the first female to enter the field in the 1940s. Her most famous invention was the hydrazine resistoject propulsion system, now the industry standard for keeping satellites in orbit.

Her many honours include the National Medal of Technology and Innovation, the nation’s highest honour for engineers and innovators, the NASA Distinguished Public Service Medal,  the AIAA Wyld Propulsion Award, and the American Association of Engineering Societies John Fritz Medal.

"I think my biggest contribution now can be to ensure that women who deserve to be nominated for awards get nominated."

Even with all her awards and accomplishments, the New York Times overlooked them in her 2013 obituary. This has since been amended but before the outcry, they focussed on highlighting how she 'made a mean beef stroganoff' before mentioning her groundbreaking research. Read more about her contributions to aeroscience below.

"There are still companies all over the place where they have just one woman engineer. And that individual needs to have someone - others to relate to, to maintain their equilibrium sometimes in that job that they hold, you know, to help them realize that they're on the right path."

Nevertheless, I Have Just Built My Very Own Hangman Game!