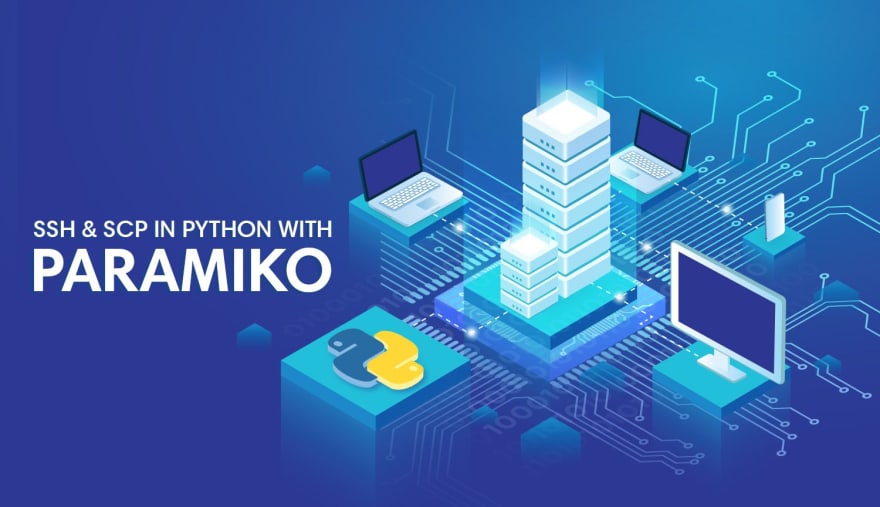 Cloud providers have made a killing from neatly-packaged managed services for years. Whether it be databases or message brokers, developers like ourselves don't seem to have a problem paying a bit extra to have things taken care of. But wait, aren't we typically the last people to opt for less optimization and less control? Why is this the time we decide otherwise? If I had to make a guess, I'd wager it's because server-side DevOps kind of sucks.

As a developer, configuring or debugging a VPS is usually work which is unaccounted for, and it isn't particularly rewarding. At best, your application will probably end up running the same as your local environment. How could we make this inevitable part of our jobs better? Well, we could automate it.

paramiko and scp are two Python libraries we can use together to automate tasks we'd want to run on a remote host such as restarting services, making updates, or grabbing log files. We're going to take a look at what scripting with these libraries looks like. Fair warning: there's a sizable amount of code in this tutorial, which tends to make me excited enough to coerce others into my manic code-tutorial episodes. If you start to feel lost, the full repo can be found here:

To authenticate an SSH connection, we need to set up a private RSA SSH key (not to be confused with OpenSSH). We can generate a key using the following command:

This will prompt us to provide a name for our key. Name it whatever you like:

Next, you'll be prompted to provide a password (feel free to leave this blank).

Now that we have our key, we need to copy this to our remote host. The easiest way to do this is by using ssh-copy-id:

If you'd like to check which keys you already have, these can be found in your system's .ssh directory:

We're looking for keys which begin with the following header:

Feel free to do the same on your FPS.

Just one more thing before we write some meaningful Python code! Create a config file to hold the variables we'll need to connect to our host. Here are the barebones of what we need to get into our server:

If you're trying to upload or download files from your remote host, you'll need to include two more variables:

Now we have everything we need to make a respectable config.py file:

We're going to create a class called RemoteClient to handle the interactions we'll be having with our remote host. Before we get too fancy, let's just start things off by instantiating the RemoteClient class with the variables we created in config.py :

Nothing impressive so far: we've just set some variables and passed them into a useless class. Let's kick things up a notch without leaving our constructor:

We've added three new things to be instantiated with our class:

We've reached the section of this exercise where we need to knock out some devastatingly inglorious boilerplate code. This is typically where emotionally inferior individuals succumb to the sheer dull obscurity of understanding SSH keys and maintaining connections. Make no mistake: authenticating and managing connections to anything programmatically is overwhelmingly dull... unless your tour guide happens to be an enchanting wordsmith, serving as your loving protector through perilous obscurity. Some people call this post a tutorial. I intend to call it art.

RemoteClient will start with two private methods: __get_ssh_key() and __upload_ssh_key(). The former will fetch a locally stored public key, and if successful, the latter will deliver this public key to our remote host as an olive branch of access. Once a locally created public key exists on a remote machine, that machine will then forever trust us our requests to connect to it: no passwords required. We'll be including proper logging along the way, just in case we run into any trouble:

_get_ssh_key() is quite simple: it verifies that an SSH key exists at the path we specified in our config to be used for connecting to our host. If the file does in fact exist, we happily set our self.ssh_key variable, so this key can be uploaded and used by our client from here forward. Paramiko provides us with a submodule called RSAKey to easily handle all things RSA key related, like parsing a private key file into a usable connection authentication. That's what we get here:

If our RSA key were incomprehensible nonsense instead of a real key, Paramiko's SSHException would have caught this and raised an exception early on explaining just that. Properly utilizing a library's error handling takes a lot of the guesswork out of "what went wrong," especially in cases like where there's potential for numerous unknowns in a niche space neither of us mess with often.

_upload_ssh_key() is where we get to jam our SSH key down the throat of our remote server while shouting, "LOOK! YOU CAN TRUST ME FOREVER NOW!" To accomplish this, I go a bit "old school" by passing bash commands via Python's os.system. Unless somebody makes me aware of a cleaner approach in the comments, I'll assume this is the most badass way to handle passing keys to a remote server.

The standard non-Python way of passing keys to a host looks like this:

This is precisely what we accomplish in our function in Python, which looks like this:

I suppose you won't let me slip that /dev/null 2>&1 bit by you? Fine. If you must know, here's some guy on StackOverflow explaining it better than I can:

So we're basically telling our remote server we're giving it something, and it's all like "where do I put this thing," to which we reply "nowhere in physical in space, as this is not an object, but rather an eternal symbol of our friendship. Our remote host is then flooded with gratitude and emotion, because yes, computers do have emotions, but we can't be bothered by that right now.

Connecting to our Client

We'll add a method to our client called connect() to handle connecting to our host:

We should close connections to our remote host whenever we're done using them. Failing to do so might not necessarily be disastrous, but I've had a few instances where enough hanging connections would eventually max out inbound traffic on port 22. Regardless of whether your use case might consider a reboot to be a disaster or mild inconvenience, let's just close our damn connections like adults as though we were wiping our butts after pooping. No matter your connection hygiene, I advocate for setting a timeout variable (as we saw earlier). Anyway. voila:

Fun fact: setting self.client.close() actually sets self.client to equal None, which is useful in cases where you might want to check if a connection is already open.

We now have a wonderful Python class that can find RSA keys, connect, and disconnect. It does lack the ability to do, well, anything useful.

We can fix this and finally begin doing "stuff" with a brand new method to execute commands, which I'll aptly dub execute_commands() (that's correct, "commands" as in potentially-more-than-one, we'll touch on that in a moment). The legwork of all this is done by the Paramiko client's built-in exec_command() method, which accepts a single string as a command and executes it:

The function we just created execute_commands() expects a list of strings to execute as commands. That's partially for convenience, but it's also because Paramiko won't run any "state" changes (like changing directories) between commands, so each command we pass to Paramiko should assume we're working out of our server's root. I took the liberty of passing three such commands like so:

You'll notice client.exec_command(cmd) returns three values as opposed to one: this can be useful to see which input produced which output. For example, here are the full logs for the example I provided where I passed three commands to remote.execute_commands():

Some beautiful stuff here. Now you can see which sites are on my server, which bots are spamming me, and how many node processes I'm running.

I don't want to waste much more time on the art of executing commands, but it's worth mentioning the presence of why we call stdout.channel.recv_exit_status() after each command. Waiting for recv_exit_status() to come back after running client.exec_command() forces our commands to be run synchronously, otherwise there's a likely chance our remote machine won't be about to decipher commands as fast as we pass them along.

Uploading (and Downloading) Files via SCP

SCP refers to both the protocol for copying files to remote machines (secure copy protocol) as well as the Python library, which utilizes this. We've already installed the SCP library, so import that shit.

The SCP and Paramiko libraries complement one another to make uploading via SCP super easy. SCPClient() creates an object which expects "transport" from Paramiko, which we provide with self.conn.get_transport(). Creating an SCP connection piggybacks off of our SSH client in terms of syntax, but these connections are separate. It's possible to close an SSH connection and leave an SCP connection open, so don't do that. Open an SCP connection like this:

Uploading a single file is boring, so let's upload an entire directory of files instead. bulk_upload() accepts a list of file paths, and then calls __upload_single_file()

Our method is expecting to receive two strings: the first being the local path to our file, and the second being the path of the remote directory we'd like to upload to.

SCP's put() method will upload a local file to our remote host. This will replace existing files with the same name if they happen to exist at the destination we specify. That's all it takes!

The counterpart to SCP's put() is the get() method:

We now have a sick Python class to handle SSH and SCP with a remote host... let's put it to work! The following snippet is a quick way to test what we've built so far. In short, this script looks for a local folder filled with files (in my case, I filled the folder with fox gifs 🦊).

Check out how easy it is to create a main.py that handles complex tasks on remote machines thanks to our RemoteClient class:

Here's the output of the our upload function:

It worked! Don't believe me? Why don't we check for ourselves by running remote.execute_commands(['cd /var/www/ && ls'])?

There you have it. Straight from the fox's mouth.

Take It And Run With It

This is where I'd like to take a moment to thank all of you, and apologize that you're still here. I swore an oath to myself to stop posting tutorials over two thousand words long, and this one is looking to push five thousand words of nonsense. I'll work on that. New year, new me.

For your convenience, I've uploaded the source for this tutorial to Github. Feel free to take this and run with it! To close things out, I'll leave you with the meat and potatoes of the Client class we put together:

The full source code for this tutorial can be found here: