IUP is a cross-platform GUI toolkit that uses native controls. It uses GTK on Linux and, well, GTK on macOS too. According to the roadmap, there is a macOS native driver in the works, but it looks like one of those perpetually "coming soon" features. There are bindings for various programming languages including a Chicken egg. Instead of building yet another calculator, let's build a GUI for generating a tone. 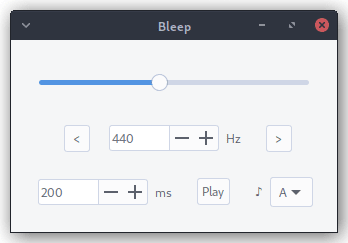 You'll need Chicken Scheme installed. It's available in the repositories of most Linux distros. You'll also need the IUP libraries installed before you can install the IUP egg. Unfortunately, IUP doesn't appear to be packaged for many Linux distros. Fortunately, there are pre-compiled binaries available for download on the IUP website. They are packaged as a tarball. Each tarball includes shell scripts for installing the libraries (moving them to system-wide locations for which sudo may be required depending on your distro). In addition to IUP, you also need to download two other libraries also developed by Tecgraf Institute at PUC-Rio called IM and CD. For Linux, there are different downloads for different kernel versions. These appear to correspond to versions of the Linux kernel that came with different Ubuntu releases. I use Debian Sid, which has a newer kernel than any Ubuntu release, so I just downloaded the package for the most recent kernel available, and it worked fine. Position yourself in the directory where you downloaded the tarballs and:

You'll also need to specify the dynamic library path when executing the program with Chicken.

If using IUP from its native C, attribute setting is a separate step from object construction. The Scheme bindings add a little syntactic sugar that allow specifying your entire UI as an S-expression. Attribute names are keywords which can be passed directly to widget constructors along with child widgets. The attributes have a trailing colon. You can look up what attributes a widget accepts in the original C documentation.

The vbox is an invisible widget that helps with layout. Let's start by placing a slider within this vbox.

The range of frequencies audible by humans is typically between 20 Hz and 20 KHz (we lose the ability to hear some of those higher frequencies as we age). The musical note A above middle C is 440 Hz. Since A4 serves as a general tuning standard, it seems like a sensible default, but if you run the above in Chicken, this is what you'll see:

The scale of 20 to 20,000 is so large that 440 doesn't appear to move the slider at all. Ideally, 440 would fall about the middle of the slider. To achieve this, let's use a logarithmic scale.

I found a Stack Overflow answer on how to map a slider to a logarithmic scale. The code given in the answer is JavaScript, but it was easy enough to port to Scheme.

I added some global parameters to the top of the script. The variable name *min-position* is just a Lisp naming convention for global parameters. I came up with the range of 0-2,000 by trial and error. It seemed to strike the best balance between each step of the slider making a noticeable change to the frequency while still allowing the user to narrow in on a specific frequency with just the slider.

Underneath the slider is a spin box showing the current frequency and buttons to increase/decrease the frequency by one octave.

In IUP a spin box is just a text box that has the spin attribute set to "Yes." At this point, we are starting to have a nice looking interface, but it doesn't do anything. If you click the buttons or slide the slider, nothing happens. Widgets also take callbacks. Callbacks are specified just like attributes and are functions that take one or more arguments, usually self, which is the widget to which the callback belongs, and return a symbol: usually 'default but also 'close to close a dialog or others such as 'ignore and 'continue. The names of callbacks that a widget accepts and their arguments can be looked up in the original C documentation. Both the slider/valuator and the spin box have a valuechanged-cb callback (converted from valuechanged_cb in the original C API).

Wire the action callbacks of the buttons up to functions called decrease-octave and increase-octave. An octave is "the interval between one musical pitch and another with double its frequency."

Let's use another spin box to specify the duration of the beep in milliseconds.:

Frequency is rather abstract. Let's also give the user the ability to select a musical note. We can store the corresponding frequencies for A4-G4 in an association list.

We'll give the user a drop-down menu. Whenever a note is selected from the drop-down menu, we'll look up the frequency in the association list and set it using the set-frequency helper function we created for the octave buttons.

Now, let's make some noise. There are Chicken Scheme bindings to the Allegro library. Allegro is a library primarily used by games for cross-platform graphics, input devices, and more. What we're interested in is the audio addon that can be used to generate a tone with a sine wave. You'll need to install the Allegro library. Make sure you also install the header files. In some Linux distros, these are split into a separate package (e.g. liballegro5-dev on Debian). Also, install the Allegro egg (chicken-install -sudo allegro). I added the following lines near the top to import the Allegro bindings (and the chicken memory module, which we'll also use).

You must place the code to initialize Allegro between the function to show the main IUP dialog and starting the IUP main-loop. If it comes before show, the program will die with a segmentation violation, and it can't come after the main-loop, because it would never get executed until the window closed.

The Allegro egg is accompanied by a couple of examples but no examples showing the use of the audio addon. The Allegro library itself comes with an example showing how to generate a saw wave, but being a C library, the example is, of course, in C. I ported that example to Scheme. I would have contributed the example back to the Allegro egg, but the repo is marked as "archived by the owner" and read-only on GitHub. I've included the example in the repo alongside the rest of the code for this tutorial in case someone finds it useful.

Allegro is very low-level. You create an audio stream. In this case, the stream buffers eight fragments of 1,024 samples each at a frequency (often called sampling rate) of 44,100 Hz (the sampling rate of an audio CD), which means there are 44,100 samples per second. Each sample is a 32-bit float (what is called the bit depth of the audio), and we only have one channel to keep things as simple as possible.

An event loop waits for the audio stream to ask for another buffer. Our job is to fill that buffer with 1,024 32-bit floats at a time. In the code listing above, this is done by fill-buffer. That was just a placeholder, so I could break the code up into shorter, more easily explainable chunks. This is what goes in the place of (fill-buffer buffer n):

The Allegro egg is a pretty thin wrapper of the Allegro library. The audio-stream-fragment procedure in the egg just passes along the C pointer that the corresponding al_get_audio_stream_fragment function from the C library returns. It would have been nice if the egg had offered some Scheme conveniences atop Allegro like allowing us to pass a Scheme list or array to Allegro to provide the buffer of samples. Since it doesn't, we'll use the chicken memory module to fill the C array starting at the C pointer returned by audio-stream-fragment. We use pointer->address to get the address of the pointer. A pointer references a byte of memory. We can reference the preceding or following byte by subtracting or adding 1 to the address. Since we are filling the array with 32-bit floats, and 32 bits is 4 bytes, we want to increment the address by 4 each time. Then we can set the value of the current location with pointer-f32-set!.

Then you just need to feed Allegro buffers of 1,024 samples at a time. The basic formula for a sine wave is A sin(2πft) where A is amplitude, f is frequency, and t is time.

Wire this up to a play button, and you're ready to make some noise.

The documentation for the iup egg is pretty sparse, but this tutorial on using the iup egg was indispensable in writing the above tutorial.

You can check out the entire example on GitHub. This started as a personal learning project to explore the state of GUI programming in Lisp and has become a series of tutorials on building GUIs with various dialects of Lisp.

The Crucial Concept of the Temporal Dead Zone: Don't Get Caught Off Guard in Your Next Interview!

Scilab: A Beginner's Guide to Basic Commands I

Once suspended, goober99 will not be able to comment or publish posts until their suspension is removed.

Once unsuspended, goober99 will be able to comment and publish posts again.

Once unpublished, all posts by goober99 will become hidden and only accessible to themselves.

If goober99 is not suspended, they can still re-publish their posts from their dashboard.

Once unpublished, this post will become invisible to the public and only accessible to Matthew D. Miller.

Thanks for keeping DEV Community 👩‍💻👨‍💻 safe. Here is what you can do to flag goober99:

Unflagging goober99 will restore default visibility to their posts.