I recently published the release v0.6.0 of Node-secure. If you missed the previous articles:

These past weeks I have worked hard on exporting the AST Analysis in is own npm package js-x-ray. I have written an article on this subject recently if you want to know more.

As usual we will review the new features that version 0.6.0 brings.

The AST analysis has been moved to the js-x-ray package. This notably allowed to reduce the number of tests to maintain.

Even more tests have been added to enhance the coverage by ten percent (95%).

All front-end assets is now bundled with webpack. This slightly improves the maintainability of front assets and codes.

The configuration is surely not perfect, and a lot of space could surely be saved for the package tarball.

This version allows for new languages to be added. The current version support both English and French (which is my native language).

The tokens cover all the parts of Node-secure (CLI, API and UI). However, the UI is not entirely finished because a lot of text is added through the JavaScript code (I will work on improving the surface for the next version.).

Feel free to pull-request your own language (or help with existing one). There is a root i18n directory on the Github.

The lang command has been added to be able to switch between languages.

Move between parent and children easily with the left menu (used by / third-party dependencies).

And a new link to open the npm package page. 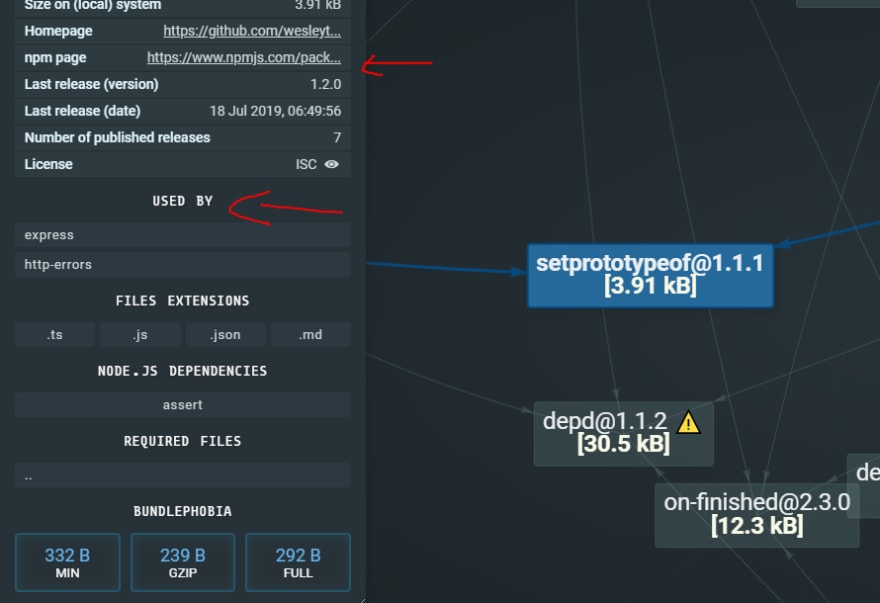 The new searchbar allows to search anything on the tree (graph) by multiple criteria (filters). The current available filters are:

The searchbar and some of the filters still require a huge amount of work to work properly (example: there is missing flags). So don't worry we will work to improve it for the next version!

This new command has only been fully implemented as API but not yet full featured for the CLI. I created the command to run complete and advanced analysis on a given npm package.

And maybe more in the future. In CLI the command only print the JSON payload to the terminal.

The root of the Node-secure JSON has been completely refactored to allow new metadata to appear in the future.

And one of the new root metadata is warnings. At the moment these are just simple warning messages.

Example with @scarf/scarf which is a package that collect data against your will by default.

These warnings will obviously evolve over time!

New experimental warnings were added by the js-x-ray AST analysis:

Hexa-value is not a much relevant as we want yet (we will work to remove 80-90% of false positives).

Please feel free to feedback on these warnings! Making them as precise as possible is essential to achieve the goal of Node-secure.

At least 20 to 30 hours of work have been invested on the js-x-ray package. The current release detects major security threats in ALL Node.js code payload of the precedent attacks and issues (some are hosted on badjs.).

If you think you have a code that is not detected then open an issue (We'll make sure to detect it in the future.).

At the beginning of the project we laughed about how cool it would be to be able to detect what's going on in the following code:

No more inspiration for emoji 😅

This new flag uses the API entry of the package ban-sensitive-files. This highlight that the project has at least one sensitive file (or a file with sensitive information in it).

A lot of fix and improvement

The next version will mainly be used to stabilize and complete the functionality of this version.

One of the next major feature will be to walk the dependency tree by using the package-lock.json (only with the cwd command). This feature will bring a lot of new flags to match as possible the usage of lockfile-lint.

Please take a look at the complete documentation here.

Thank to all of those who give me valuable feedback. Thank you for taking the time to read my articles too!

Think to put a star on the github!

Creating a Restaurant Receptionist BOT from LEVEL 0 by SilvenLEAF

How to generate Generics DTOs with nestjs/swagger