If you are here, I assume you have already embraced the merits of using Docker to set up your development environment such that it matches your staging and production environments.

In this guide I show you how to run your Django app in one Docker container and your MySQL database in another and make them talk to each other.

We are going to manage and run these two containers using Docker Compose.

👉 If you want to learn how to do this for a Django + Postgres app read this post.

I am assuming you already have a Django project locally that is using a local database and that your project has a requirements.txt file. You should also install Docker on your machine if you haven't already.

The first step is to create a Dockerfile in the root of your project (this is where you have your requirements.txt and manage.py files).

Let's go through that line by line:

Now create a new file in your local project root. This one is called docker-compose.yml and is used for configuring Docker Compose.

db uses an official MySQL image from DockerHub. We attach local port 3306 to port 3306 of this container. We then set a bunch of environment variables that are required for MySQL. Make sure you also set these in your Django database settings. (You can put these in a .env file to avoid committing sensitive information to version control. Read here to learn how.)

web build its image using the Dockerfile we created earlier. It then runs the Django server and exposes port 8000 to your machine. We map your local project folder to the app folder and we bring in the socket file. We tell Docker Compose that this service is dependant on the db service.

Now all we have to do is to start everything up. In your project root run:

This should build your images and start the containers. Open a browser and go to 0.0.0.0:8000. You should see your app. Now if you open a new terminal and run a docker ps you will see the web and db containers are running:

If you want to stop Docker Compose, press Ctrl+C in the first terminal or run docker-compose stop in the project root folder in another terminal.

To run manage.py commands in the Django container (web): 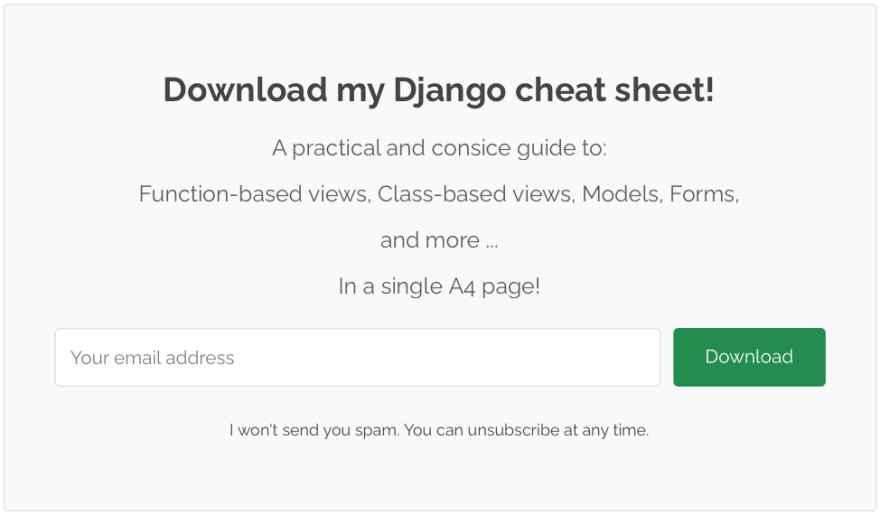 How to run multiple commands in Docker Container

foadmoha
My name is Foad. I am a backend Python developer with some experience in machine learning.
Authentication with Django REST Framework
#django #djangorestframework #authentication
Creating custom manage.py commands for Django
#django
Validating Django models that are created without forms
#python #django #webdev
Forem Open with the Forem app