I've jumped between Atom, Sublime Text, VS Code; even tried emacs and vim. Still haven't found the 'one'. Here's why.

I'm not qualified enough to comment on the emacs / vim, so I'm going to consider them as one here.

The speed of the program is based on the technology it's written in. The ones using JS frameworks like Electron tend to be much slower compared to others.
Ok, it may be a lot easier for the developers to use Electron to have a cross platform app, but you're losing the speed by doing so (at least that's how it's been so far).

One can use elisp for Emacs, Python for Sublime, Typescript for VS Code etc. All the editors I've used so far are expendable, if you're willing to. They are depending on the community behind them to make it expandable. I remember the hype surrounding Sublime Text back in the day, 'extensions with Python, cool!'. And now the big hype is with VS Code.
They all may have their limitations, but in the end, they're only as good as the community behind them. So, it has to be 'popular' too.

Call me paranoid, but I want to have one editor that I can use for the rest of my life that is not controlled by big companies (you're excluded Mozilla, love you).
That's the reason why I chose;

to learn vue.js over React
to learn Python over GO
use Firefox over Chromium based ones

The 'one' has to be maintained by individuals, who are willing to hand it over to someone else when the time comes. And not be like this (question 8). 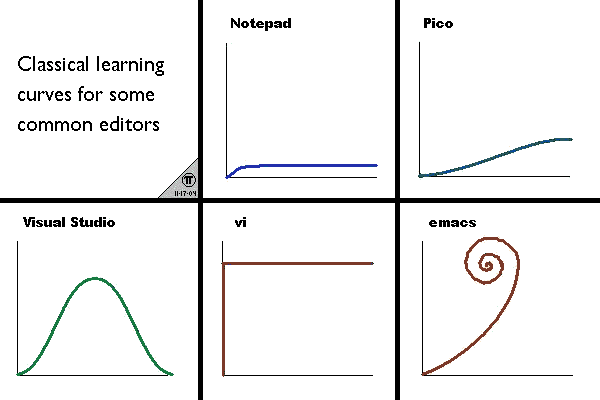 I want the graph of a simple equation: x=y.
Learning the vi way could be a lot more efficient in the long run. But I don't want to spend that much time to learn to use a new tool (at least not yet). All the muscle memory... Having a decent GUI to get people started, and having the possibility of modifying it further when you're more used to it (settings in VS Code).

Microsoft does this with their calculator, and I'm the paranoid one?!
Also what did I say, an open source product is only as good as its community.

I can see myself jumping over one editor to the other until one of them meets those 6 criteria. People have mentioned their journey here:

Is it so much to ask for Mozilla to come up with the next Atom / VS Code or wishing to have Sublime Text to be open sourced?

p.s not affiliated with Mozilla other than being a donor.

10 Ways Developers Can Invest Time Instead of Wasting it

Fıratcan Sucu
Vuejs, React, Or Angular?
#vue #react #angular #discuss
If you fantasize about quitting dev, what you have in mind to do?
#discuss #webdev
What new software libraries and tools etc. are you excited about?
#discuss