Mobile apps have become an integral part of our lives. Everything is available with just a few taps, from booking an air ticket or hotel to ordering food, shopping for apparel, ordering groceries, and paying utility bills. And now, two major languages and frameworks dominate the development of mobile applications. Kotlin and Flutter. Whereas hotlines is a programming language and Flutter is a system.

Before cross-platform development, Flutter and React Native was the go-to programming solutions, and developers highly used these languages. However, today Kotlin has also become very popular and has managed to enter the competition. So, the debate started over who will rule the market and which will be more demanding for application development. Let's go into the depth of it to understand the difference between them, then we can think about which one we prefer.

It's open-source and free. First developed by Google in May 2017, Google now administers an ECMA standard. It is an increasingly popular technology that provides excellent native experiences. Google introduced it as an SDK for developing modern iOS and Android mobile apps. If we are using Android Studio, it comes with built-in Java and Goal C and Swift on iOS.

Kotlin is an open-source programming language, a cross-platform. This can be found using Java, a dynamically typed JVM language. Also, we can use it for Android apps, server apps, and many more. Technology emerges as the most successful.

JetBrains developed it and launched a small project in 2010. In February 2016, Kotlin's first official release was made. The Apache 2.0 license has been created. Kotlin has a specific "Kotlin Multiplatform" function: JVM bytecode, LLVM code compatible, or JavaScript. Kotlin has an unlimited application range. 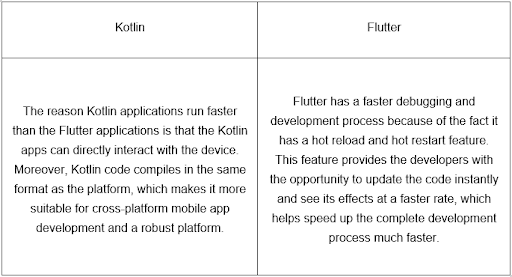 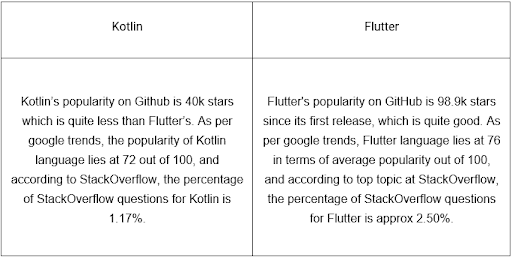 Both solutions come with their strongest advantage, and now we will break them down to better understand which solution will be the best for developing mobile application software.

Null safety: Null safety is one of the most innovative features of the Kotlin language. This feature eliminates the risk of null pointer exceptions by differentiating between nullable and non-nullable references, and Kotlin doesn't compile the code which tries to return null.

Robust performance: In Kotlin language, the code you write is compiled in the same format as the platform it is planned; this feature provides the performance to the native app development, making Kotlin language a robust platform.

Concise and easy to maintain: In Kotlin language, you don't have to write the entire code; unlike Java, you can write the same code with fewer lines.

Also, Koltin has a single codebase that makes it a stable language for development, and you can easily detect errors before running the code.

Hot reload: This feature allows you to see the changes that you have created, like fixing bugs, building the user interface, etc., and those changes are then reflected instantly. It helps you to write code faster and with ease.

Less development cost: In Flutter, you can use the same code because of native app development, which allows you to reuse most parts of the code. This helps cut the development time and resources, which helps reduce the budget by up to 30-40%.

Widgets: Flutter SDK comes with numerous widgets that offer many capabilities, make the app attractive, and are also used for displaying, designing, and handling interaction.

MVP and Prototype development: MVP (minimum viable product) is a simpler version of the app or software that solves the problem statement. It helps to give the true potential of the idea. It helps attract the users' interest in the product you are planning to launch. Flutter is a cross-platform development tool, so minimum time and resources are needed and can be assessed if the idea is good or not.

In this article on Kotlin vs. Flutter, you learned many things, including what exactly is Kotlin and Flutter. Then, you compared them in terms of performance, popularity, and integration of third-party libraries. Then, you also learned about the advantages of Kotlin language and Flutter.

If you are still looking for the best way to develop a mobile app, the answer will come with another question: what are your requirement is. Flutter is the answer if you are low on budget and aim for a faster development process. But if you are looking for better-integrated libraries, easier to maintain and have great capabilities to cross platforming software, Kotlin is the best answer you can get

Do you have any questions regarding the comparison between Kotlin vs. Flutter? If you do, then put them in the comments section. We'll help you solve your queries. And if you want to learn more about building a mobile application, you can choose the resources that you need.

Why Kotlin Better than Scala In Business

Interesting! Will Next.js Continue Javascript's Popularity in the UK?

Once suspended, ferry will not be able to comment or publish posts until their suspension is removed.

Once unsuspended, ferry will be able to comment and publish posts again.

Once unpublished, all posts by ferry will become hidden and only accessible to themselves.

If ferry is not suspended, they can still re-publish their posts from their dashboard.

Once unpublished, this post will become invisible to the public and only accessible to Emveep#1.

Thanks for keeping DEV Community 👩‍💻👨‍💻 safe. Here is what you can do to flag ferry:

Unflagging ferry will restore default visibility to their posts.