We start by introducing Vue.js and talk about how to integrate it with Laravel. I choose Laravel as the backend because if you installed the latest version of Laravel, you would notice that it comes with the Vue.js bundle, and in the Laravel documentation, they gave a brief introduction on how to use Vue with Laravel, along with some other tools like Bootstrap and jQuery. If you prefer using Django as your backend, I wrote an article on that as well: Build A Single Page App Using Django & Vue.js

Vue.js is an open-source JavaScript framework that follows the model-view-viewmodel architectural pattern. The core library is focused on the view layer only and is easy to pick up and integrate with other libraries or existing projects.

Let's start by creating a new Laravel project. Open PhpStorm and create a new project. In this tutorial, I'll name it "Laravel_Vue": 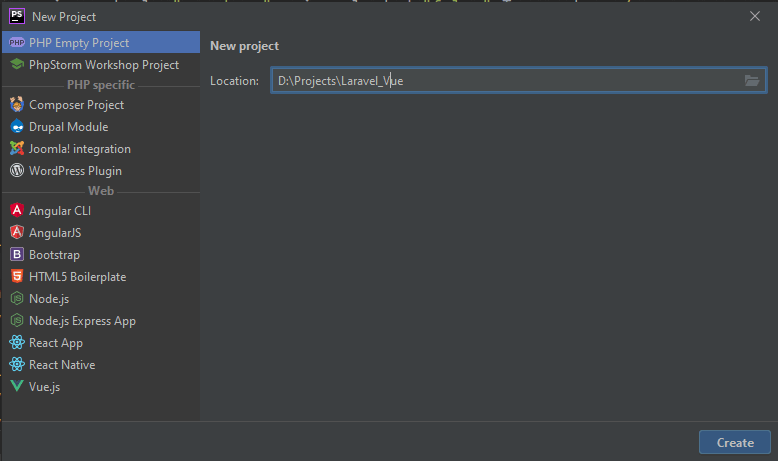 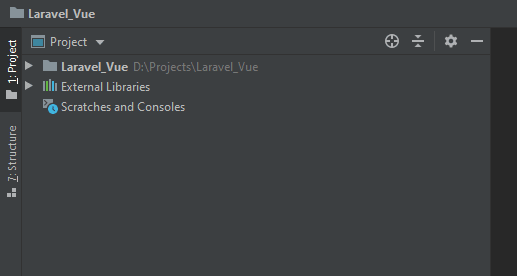 Now we need to install Laravel for our project. Open "Terminal", it should go to the root directory of the project. Run the following commands.

If you don't have composer on your computer, you need to install it before running this command.

This process will take a few minutes to complete.

To make this tutorial easier, we'll only create one route and one view as an example. Go to routes/web.php, and add the following code:

Since you are looking to create a Vue app with Laravel as the backend, I assume you already know what this code means. Next, we create a view named vue.blade.php.

Go to resources/views, and create a test vue for our project, vue.blade.php:

By default, Laravel uses NPM to install all the frontend packages like Bootstrap and Vue.js. The Bootstrap and Vue scaffolding provided by Laravel is located in the laravel/ui Composer package, which may be installed using Composer:

Once the laravel/ui package has been installed, you may install the frontend scaffolding using the ui Artisan command:

The following command will help you install these dependencies for our project. But remember, you need to install npm on your computer if you haven't done that.

Once the package is installed, you can run the npm run dev command to compile your assets. Or you can run the following command, which will be constantly monitoring your files, once it changes, it will be recompiled:

After using laravel/ui package to scaffold your frontend, you should notice that an example Vue component has been generated in the resources/js/components directory. The ExampleComponent.vue is an example of a single file Vue component, which defines its HTML and JavaScript template in the same file.

A typical Vue component has three sections: template, script, and style. The template part contains HTML code, which defines the content of the Vue component. The style part is where you put CSS code, it determines how the content looks. And finally, the script section has all the JavaScript code for your app.

Use Vue Component In Blade Template

First, let's take a look at the resources/js/app.js file, this is the entry point of our Vue components. Every time we create a Vue component, we need to register it here:

To use this example component, we need to drop it into the Laravel blade template we just created like this:

Now, start the development server, compile the frontend assets, open the browser, and go to http://127.0.0.1:8000/. You should be able to see the example component.

If you are new to Vue.js and JavaScript, I wouldn't suggest you start by reading the official documentation, because it is not designed for beginners. Personally, I prefer learning by building some small projects, which is why in the next article, we'll build a simple unit converter, and in the process, we can familiarize ourselves with Vue file structure and template syntax.

Laravel Nova: The Perfect Admin Panel For Your Laravel Apps

How Secrets Work in GitHub and How to Manage Them

My Binary Search Solution is better than yours