When developing in React Native, every Component follows a cycle from when it’s created and mounted on the DOM to when it is unmounted and destroyed. This is what we refer to as the Component lifecycle.

React Native provides hooks, methods that get called automatically at each point in the lifecycle, that give you good control of what happens at the point it is invoked. A good understanding of these hooks will give you the power to effectively control and manipulate what goes on in a component throughout its lifetime.

Our lifecycle is broadly categorized into three parts: Mounting, Updating and Unmounting. 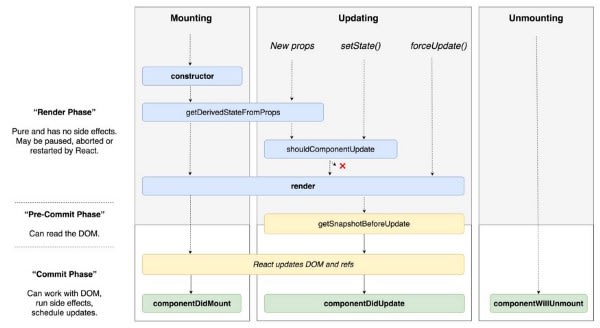 There are multiple reasons a component might re-render, and in each of them different functions are called allowing the developer to update certain parts of the Component.

The first cycle is the creation for component, which usually happens the first time a component is encountered in the parsed JSX tree:

Component re-rendering due to call to this.forceUpdate

Component re-rendering due to catching an error

Introduced in React 16 as “ErrorBoundaries”. A component can define a special layer which can catch errors and provide a new life-cycle method — componentDidCatch - which allows developers to provide self-repair actions for recovery or graceful handling of errors.

constructors are the basic of OOP — this is a special function that will get called whenever a new object is created. It’s very important to call a special function super in cases where our class extends any other class that also has a defined constructor. Calling this special function will call the constructor of our parent class and allow it to initialize itself. This is why we have access to this.props only after we’ve initially called super.

As mentioned, constructors are perfect for setting up our Component — create any fields (variables starting with this.) or initialize state based on props received.

This is also the only place where you are expected to change/set the state by directly overwriting the this.state fields. In all other instances remember to use this.setState

This is a somehow special case — componentWillMount does not differ much from constructor - it is also called once only in the initial mounting life-cycle. Historically there were some reasons to use componentWillMountover constructor see this react-redux issue but please keep in mind that the practice described there is since deprecated.

Many will be tempted to use this function in order to send a request to fetch data and expect the data to be available before the initial render is ready. This is not the case — while the request will be initialized before the render, it will not be able to finish before the render is called.

Additionally, with the changes to React Fiber (post-React 16 beta release) this function might end up being called multiple times before the initial render is called so might result in triggering multiple side-effects. Due to this fact it is not recommended to use this function for any side-effect causing operations.

A setState used in this function is “free” and will not trigger a re-render.

This function will be called in each update life-cycle caused by changes to props (parent component re-rendering) and will be passed an object map of all the props passed, no matter if the prop value has changed or not since previous re-render phase.

This function is ideal if you have a component whose parts of the state are depending on props passed from parent component as calling this.setState here will not cause an extra render call.

Please keep in mind that due to the fact that the function is called with all props, even those that did not change it is expected the developers implement a check to determine if the actual value has changed, for example:

Due to the fact that with React Fiber (post 16 beta) this function might be called multiple times before the renderfunction is actually called it is not recommended to use any side-effect causing operations here.

The new function which main responsibility is ensuring that the state and props are in sync for when it is required. Its main job is replacing componentWillReceiveProps

gDSFP is a static function and as such has no access to this — you are instead expected to return an object, which will be merged into the future state of the component (exactly like working with setState!)

The function is used when a component is updated but also when it is mounted, right after the constructor was called, so you no longer need to use constructor or class property form of state if you want to set initial state from props.

By default, all class-based Components will re-render themselves whenever the props they receiver, their state or context changes. If re-rendering the component is computation heavy (e.g. generating a chart) or is not recommended for some performance reasons, the developer is given access to a special function which will be called in the update cycle.

This function will be called internally with next values of props, state, and object. The developer can use those to verify that the change requires a re-render or not and return false to prevent the re-rendering from happening. In other cases, you are expected to return true.

If the shouldComponentUpdate function is not implemented, or it decided that the component should update in this render cycle, another life-cycle function will be called. This function is commonly used to perform state and props synchronization for when parts of your state are based on props.

In cases where shouldComponentUpdate is implemented, this function can be used instead of componentWillReceiveProps as it will be called only when the component will actually be re-rendered.

Similarly to all other componentWill* functions, this function might end up called multiple times before render so it not advised to perform side-effects causing operations here.

Other of the two new functions, invoked in the so-called “pre-commit phase”, right before the changes from VDOM are to be reflected in the DOM.

It is used mostly if you need to read the current DOM state, for example, you have an application in which new messages are added to the top of the screen — if a user scrolled down, and a new message is added the screen could move and make the UI harder to use. By adding getSnapshotBeforeUpdate you can calculate current scroll position and maintain it through the DOM update.

Even though the function is not static, it is recommended to return the value, not update the component. The returned value will be passed to componentDidUpdate as the 3rd parameter

This function will be called after render is finished in each of the re-render cycles. This means that you can be sure that the component and all its sub-components have properly rendered itself.

Due to the fact that this is the only function that is guaranteed to be called only once in each re-render cycle, it is recommended to use this function for any side-effect causing operations. Similarly to componentWillUpdateand componentWillReceiveProps this function is called with object-maps of previous props, state, and context, even if no actual change happened to those values. Because of that developers are expected to manually check if given value changed and only then perform various update operations:

An exception to the above rule is updating the state based on some DOM property which can be only computed once a component has re-rendered (e.g. position/dimensions of some DOM nodes). Please take extra care to prevent against updating if the value did not in fact change as it might result in a render loop.

With this addition you can make your parent-element handle the error by — for example — setting the error info in state and returning appropriate message in its render, or logging to the reporting system, e.g.:

When an error happens, the function will be called with:

This function will be called only once in the whole life-cycle of a given component and it being called signalizes that the component — and all its sub-components — rendered properly.

Since this function is guaranteed to be called only once it is a perfect candidate for performing any side-effect causing operations such as AJAX requests.

An exception to the above rule is updating the state based on some DOM property which can be only computed once a component has re-rendered (e.g. position/dimensions of some DOM nodes). Please take extra care to prevent against updating if the value did not in fact change as it might result in a render loop.

Use this function to “clean up” after the component if it takes advantage of timers (setTimeout, setInterval), opens sockets or performs any operations we need to close/remove when no longer needed.

In this post, you learned about React js and React Native life cycle hooks.