This story is the first on a series where we will clone the front-end of existing websites or web apps to showcase some features of Kor UI and how they can be used to achieve various goals in UI design and development.

Dev.to is a website focused on community discussions around topics related to software development. We have chosen the home page as a basis for our project because of its richness of layout and content.

In total, 34 Kor components have been used, 8 standard HTML elements (e.g. div, br) and only 27 CSS rules have been applied.

The technology chosen by us for the project was Angular (with SCSS stylesheets) and the codebase can be found in the Stackblitz project.

🎨 Part 1: Setting up the theme

The dev.to visual language is already quite close to the default styles of Kor UI, but there are some differences which have been handled through customisation in 3 levels: colors, fonts and component styles.

In this case we have chosen to extend the default dark theme since many styles are shared and wouldn’t need to be defined from scratch.

The most obvious divergence between the default colors and the ones used by dev.to is concerning the blue-ish base colors. The luminosity of both schemes are similar, but the hues have been tweaked to match exactly the intended visual appearance.

In addition, the main accent color has been tweaked to match the purple tone used in dev.to (see for example on the button or active tab highlights).

The typographic style in dev.to differs from the default Kor UI theme in 2 main points: font sizes and font family.

Since fonts are bigger in dev.to, the values of font size have been increased by 2px in all text styles. For example, the main body font has been changed from 14px to 16px.

The font family has also changed from Open Sans to sans-serif (custom fonts haven’t been loaded for convenience’s sake).

A few components had to have their default styles customised to match the design of the ones used in dev.to. Here is a complete list:

In viewports wider than 1280px, the content of the website becomes centered on the page instead of spanning from edge to edge. For this reason, a horizontal padding has been added to both kor-app-bar and to the kor-grid itself.

Since the homepage of dev.to is based on a 2-dimensional grid, the kor-grid component has been used and set to have grid-template-columns: 240px 2fr 1fr, as shown on the image below: 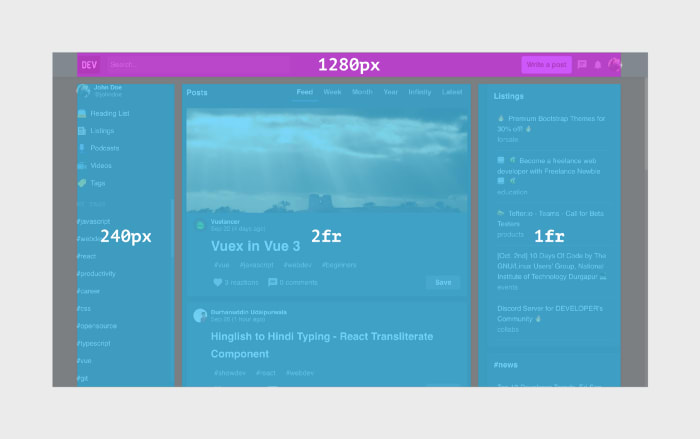 In this post we have showcased the flexibility of Kor UI and how developers and designers can customize themes to achieve unique visual appearance for expressing their brand’s personality.

Besides showing how color and fonts can be changed, we have seen that individual components can have their appearance modified without compromising their behaviour.

Furthermore, we have shown how complex layouts can be achieved through minimal settings and the use of components such as the Grid.

In the next stories of this series we will cover more diverse use cases, including mobile apps. We hope you have found the information useful and hope to see you next time!