Each year, Python continues to grow in popularity. Simultaneously, areas like web development, data science, and machine learning continue to rise in need, with Python as a common programming language within these domains.

With more demand for Python professionals, beginners and advanced programmers alike need more resources to master this in-demand language. So, we've put together a list of the most common questions developer like you have about Python. Everything from for loops to documentation to GUIs.

Today, we'll be covering the following:

A language that is both powerful and clear, it incorporates interfaces to many system classes and libraries. Python can also be used as an extension language for applications that require a programmable interface.

What is the history of Python?

Python was created in the 1980s by Guido Van Rossum at the Centrum Wiskunde & Informatica in the Netherlands. Python was originally created to be a successor to the ABC language, which would be capable of exception handling and interfacing with the Amoeba operating system.

He was the sole person responsible for the Python project until July 12th, 2018. In January 2019, core developers elected Brett Cannon, Nick Coghlan, Barry Warsaw, Carol Willing, and Van Rossum to lead the project.

What are the key features of Python?

How do I install Python?

What are the best Python IDEs?

An IDE (Integrated Development Environment) is a program dedicated to software development. In this case, we are looking for an IDE dedicated toward python development. Some features of an IDE include:

A good IDE for a Python environment offers certain important features: save and reload your code files, run code from within the environment, debugging support, syntax highlighting, and automatic code formatting.

What are the best resources for learning Python?

The best way to learn Python is with hands-on practice. Python is intuitive, so focusing on coding challenges will improve your skills. You can get ideas for these on GitHub, the official Python website, or online courses.

Blogs and forums are great resources where you can see other people's ideas, ask questions, and get step-by-step guides for free. Here are some suggestions:

In terms of courses, we recommend text-based instruction over video. You'll spend way less time scrubbing and actually practicing what you want to learn. Here are some course suggestions to get started: 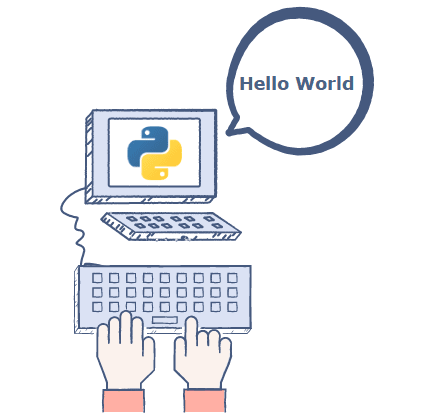 What are the basic concepts of Python?

Let's first start with Python not using semicolons to finish lines, unlike most programming languages. A new line is enough for the interpreter to detect a new command.

In the example using the print() method, we can see an example.

Most languages will use curly brackets to define the scope of a code block, but Python's interpreter will simply determine that through an indentation. This means that you have to be especially careful with white spaces in your code, which can break your application. Below is an example.

To comment something in your code, you simply need to use a hash mark #. Below, is an example.

With python, you can store and manipulate data in your program. A variable stores a data such as a number, a username, a password, etc. To create (declare) a variable you can use the = symbol.

Notice that in Python, you don't need to tell the program whether the variable is a string or an integer, for instance. That's because Python has dynamic typing, in which the interpreter automatically detects the data type.

To store data in Python, we have already established that you need to use variables. Still, with every variable, there will be a data type.
Examples of data types are strings, integers, booleans, and lists.

A boolean type can only hold the value of True or False.

An integer is one of three numeric types, including float and complex. An integer is a positive or negative whole number.

A string is one of the most common data type.

Operators are symbols that can be used in your values and variables to perform comparison and mathematical operations.

What are the rules for local and global variables?

In Python, variables referenced within a function are implicitly global. If a variable is assigned a value within the function's body, it's local unless you explicitly declare it as global.

What is the best practice for using import in a module?

In general, don't use from modulename import *. This will clutter the importer's namespace, which makes it much harder for linters to detect undefined names.

Import modules at the top of the file, which makes it clear what modules your code requires. Use one import per line.

Generally, it's good practice to import modules in the following order:

You should only move your imports into a local scope if you need to solve a problem such as avoiding a circular import or trying to reduce the initialization time of a module.

What is a class in Python?

Essentially everything in Python is an object, which has properties and methods. A class is an object constructor that acts as blueprint for creating objects.

Here, we create a class named MyClass with the property X. Then, we create a p1 object and print the value of X.

When you create a class, you create a new type of object, which allows for new instances of that type. Each class will have its unique attributes attached to it. Compared to other programming languages, Python's class incorporation uses minimum syntax and semantics.

How do I use strings to call functions or methods?

There are various techniques to achieve this, but the best way is to use a dictionary that maps strings to functions. With this approach, strings do not need to match the names of the functions. It's also the primary technique that is used to emulate a case construct:

How to delete a file in Python

This task looks as simple as it is. All you do is is call os.remove() with the filename and path. Python defaults to the current directory.

How do I generate random numbers in Python?

The generate a random number in Python, you can use the randint() function.

Can I read or write binary data in Python?

For complex and non-regular data formats, you should use the struct module. This allows you to take a string containing binary data and convert it to a Python object and vice versa.

In the example below, the code reads two 2-byte integers and one 4-byte integer in big-endian format from a file:

What GUI toolkits exist for Python?

Where to go next

To continue your Python journey, check out Educative's learning path Ace the Python Coding Interview. By the time you’re done with these seven modules, you will have thoroughly mastered Python and be ready to get a job as a Python dev or work on your own projects.

Was there a Python FAQ that you didn't see in our list? Was this article helpful? Let us know in the comments below!