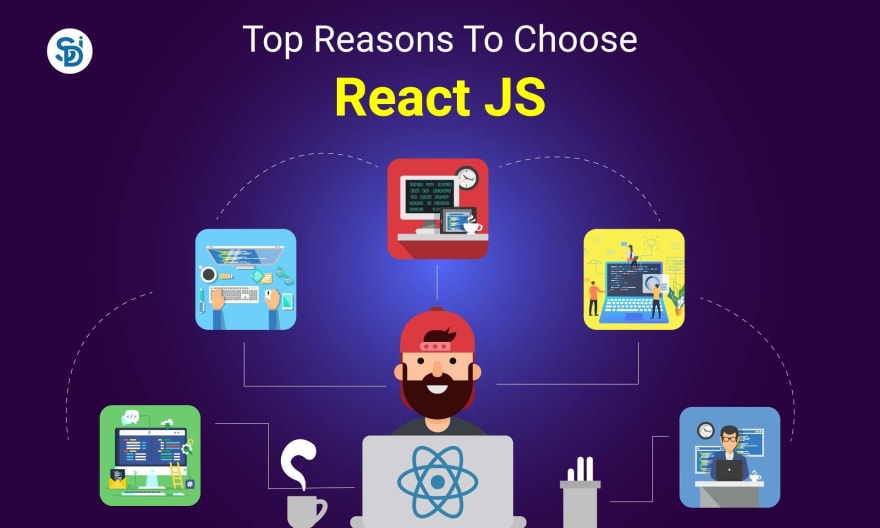 React JS is simple & easy to use library designed for creating impressive user interfaces It is developed by Facebook and managed by an active community of individual developers and companies. React JS is an evolving technology, it is labelled as the best open-source library in recent years. Today, over 220,000 live websites are using React JS, including giants like Apple, Netflix, Pay-pal, and many such brands. So, what is special about this technology?

React JS helps in making an interactive user interface quicker than any other java libraries. It is easy to learn and use technology for curating engaging web apps with minimal coding. With its flexibility and simplicity, React JS has emerged as one of the best technologies in the front-end development, hire react developers for developing an impressive and engaging web app. There is more to this incredible technology, further, we will discuss the benefits of React JS and why it is popular among popular giants like Facebook.

What is React JS?

React JS is an open-source JavaScript library for building user interfaces of web applications. The technology was created by Jordan Walke, an employee of Facebook and is now used by many popular brands across the globe. It is an easy to use technology that helps in making attractive looking web applications, offering flexibility in changing data without requiring a page reload. ReactJS is used by many companies around the world, given its speed, performance, usability, and development.

If you are thinking about whether to use React JS or not, let’s discuss why it would be a great choice for your next web development project:

Now you might have a good idea of what ReactJS is, and why it is preferred by the top brands. Further, we will discuss the benefits of ReactJS in detail:

The technology allows developers to work on individual parts of applications, which involves both clients and the server-side, which eventually leads to speedy development. A react js development company can easily develop apps for every OS as it uses a native browser engine, which is a great advantage to the businesses, as they get apps for both popular platforms in half the time.

React’s code is easier to manage and is flexible compared to other front-end frameworks. Flexible working of ReactJS saves time and lowers the overall cost of the project.

ReactJS is recognized for high performance, it was built to provide excellent functionality to the applications. It comes with a Virtual DOM program and server-side rendering. As a result, developers can easily develop large apps.

Deployment of ReactJS is easier as it requires a basic knowledge of JavaScript. It’s a fact that an expert JavaScript developer can easily gain command over basic ins and out of ReactJS in a few days, this ensures speedily deployment process and boosts productivity in the long run.

Why React JS is the best choice for your next web project?

Who doesn’t embrace rich user interfaces? Reactjs is the right choice for developing impressive web applications. An interactive and impressive application drives attention, so the users would love to use the application. If you are looking for an attractive UI for your app, you can hire a front end development company offering Reactjs services.

ReactJS is easy to learn compared to other front-end frameworks like angular. This is one of the reasons that makes ReactJs a popular technology among the developers.

The cost of mobile or web development is lower with Reactjs compared to native app development. This is because you will have to hire different native developers for different technologies, which double the cost of the overall project. Hence, Reactjs is a cost-effective option.

ReactJs has a very strong and supportive community, which is of the major reasons to opt Reactjs for your next project. React native community is massive and it has a large number of developers, many of them are associated with a JavaScript development company, they can give provide expert guidance for major and minor development issues. The react developers are eager to solve doubts on various issues and they are always ready to give advice to other developers.

ReactJS is SEO friendly. Along with other benefits of Reactjs such as handling search engine issues efficiently, hence, this library could be the best fit for your web development project, as it enhances overall user experience along with making your website more visible to users.

In ReactJS’s code, parent structure isn’t affected when little changes are made in the child structure. Developers can easily modify and make amendments and those specific components, which will be automatically updated. ReactJS ensure a smooth app performance with stable code.

Developers can re-use objects when using Reactjs, it makes the workflow less stressful and boost productivity. But more than often, it becomes difficult to make changes in applications with complicated logic, hence employing the same digital object increases the productivity and efficiency of developers. There are many advantages of working on Reactjs, the react js development is easier and less stressful on a developer’s part.

As mentioned above, ReactJs is used by renowned companies and start-ups around the world like Facebook, Code Academy, Netflix, PayPal and many more. It proves that ReactJS is undoubtedly a brilliant tool for front end development. Not only it offers a rich user interface, but it is also offering many other incredible features for efficient web development.

React is a high-quality library with many benefits and features, which help developers create incredible user interfaces. ReactJS is a relatively new library, it was initially created as an internal tool by Facebook engineers and soon became a widely popular library adopted by many individual developers.

As you are searching for the perfect front end development technology for your project, prioritize the application to be developed and designed using the best practices and technologies. Not all frameworks and libraries are would be a fit for your project, so consider employing a good front end development company to make the right choice for you. We hope you have gained good knowledge about the functionality of ReactJs and its benefits over other frameworks and libraries in our blog. Good luck for your next project.

Understand the context of code you copy