Disclaimer: The author of this post is not affiliated with the creator of SHA256le.

SHA256le is a variant of the viral word game Wordle by GitHub user keftcha, where the mystery word is replaced with a mystery SHA256 hash.

Recall that a hash is just a value comprised of a fixed number of bits - in the case of SHA256, 256 bits. So basically, this variant of the game asks you to guess a 256-bit value, though unlike the original, there is no limit to the number of guesses you can make.

Note that bits in hashes are typically represented as hexadecimal digits, by arranging the bits in groups of 4. So instead of entering 256 ones and zeroes as your guess, you should enter 256 / 4 = 64 hexadecimal digits instead.

At first glance, the game seems insanely difficult as you have to guess the contents of a random, long sequence of characters that look like total gibberish instead of proper English words. But it turns out, there is a strategy that ensures you never have to make too many guesses. In particular, I claim that given the correct strategy, you only ever need to make 16 guesses at most. What is that strategy, and why does it work?

I'll give you some time to think about it. If you would rather receive the explanation directly, continue reading ;-)

Proof of my claim

So, a possible strategy is as follows:

If you arrive at the correct guess before cycling through all possible digits, then you used less than 16 guesses. Otherwise, at the end of the 15th guess, you know that whatever incorrect digits remaining must be the only digit that you have not tried.

The strategy in action 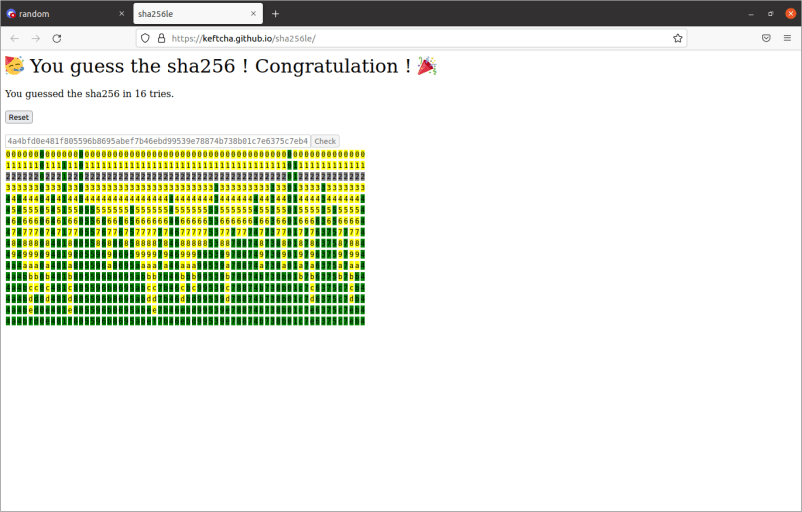 The strategy highlighted above gives a worst-case scenario of 16 guesses. Here are some more food for thought:

I hope you enjoyed this article ;-)

🔥 7 Powerful Mac Applications that You Must Install 🚀

How to have fun (and win) in a hackathon

Once suspended, donaldsebleung will not be able to comment or publish posts until their suspension is removed.

Once unsuspended, donaldsebleung will be able to comment and publish posts again.

Once unpublished, all posts by donaldsebleung will become hidden and only accessible to themselves.

If donaldsebleung is not suspended, they can still re-publish their posts from their dashboard.

Once unpublished, this post will become invisible to the public and only accessible to Donald Sebastian Leung.

Thanks for keeping DEV Community safe. Here is what you can do to flag donaldsebleung:

Unflagging donaldsebleung will restore default visibility to their posts.