The Mythical 10x Developer. A Creature As Elusive As Bigfoot. 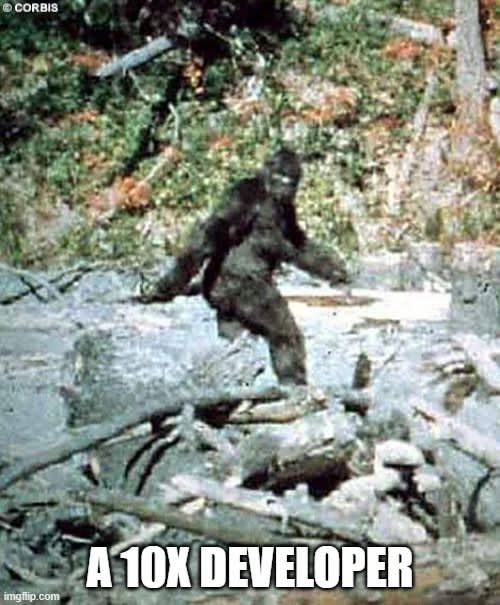 Developers love to debate whether 10x developers really exist. But you don't have to be a 10x developer to increase your delivery speed.

Search "10x developer" on HackerNews, and you'll find many heated online debates on the topic. Expect nuggets of wisdom such as "Being a "real" 10X programmer is like being a savant. It's about being F****** SMART."

We're not going to weigh in on the debate of the 10x developer. At least not in relation to individual talent. Instead, we want to look at it from the perspective of development tools.

How To Achieve 10x Productivity

Remember the story of the 30-story hotel built in China in just 15 days? If not, watch the video first before continuing to read.

Here are three lessons we can learn from the video regarding software engineering.

"If you're writing it from scratch, you're doing it wrong!" - Titus Winters, Software Engineering at Google

What's the overall conclusion? Process improvements, be it through better dev tools, such as low-code solutions, management techniques or even organization culture, can trump individual skill. Software engineering is best managed as an engineering process. And outcomes are driven by making this process as efficient as possible.

Originally published at https://five.co/low-code-achieving-10x-software-engineering-productivity-through-better-dev-tools/ on August 23, 2022.

Dom | Five.Co
Likes to talk about software engineering: how do you build, test and deploy good software fast? There are more than 700 programming languages. And I don't speak a single one of them fluently. 🤷🏻‍♂️
Data Validation In Low-Code
#lowcode #datascience
The Future Of Software Engineering: Is Low-Code The Answer? [Infographic]
#programming #webdev #lowcode #productivity
Software Developers vs. Citizen Developers
#lowcode #webdev #beginners #programming