Hi all, here's the latest resources and news featured in our newsletter. Hope they are of use to you!

For developers who take our survey today, you'll enter our advent prize draws for a chance to win one of the following prizes:

If you're reading this after 22 December, don't worry, we have more prizes to be won in our general prize draws.

"You say ‘amateur’ as if it was a dirty word. ‘Amateur’ comes from the Latin word 'amare’, which means to love. To do things for the love of it." - Mozart in the Jungle

How writing skills can help developers grow. With communication being the #1 in-demand skill today, writing can influence your engineering career more than you think. It's time to get the most out of it, agree? [DZONE]

How Apple just changed the entire industry. A thorough and easy to understand video covering the basics behind desktop/mobile CPUs. [YOUTUBE]

A complete computer science study plan to become a software engineer. John Washam has created this great list which will prepare you well for a technical interview at just about any software company. [GITHUB.JWASHAM]

How one developer recreated AirDrop using just JavaScript. SnapDrop.net, created by Robin Linus, lets you directly share files between any device with a browser. Doesn't matter if it's between iPhone and Android or a tablet with a PC. [DEVTO]

10 things I wish I’d learned sooner after being a developer for 10 years. I’m prone to reminiscing, especially while being stuck in the house in the middle of a global pandemic, so I sat down and revisited my greatest hits. [MEDIUM]

Voice search in mobile applications and websites. For many, voice search only or primarily refers to search engine optimization for voice queries. This is a valid use case for voice, but not the only one. Voice could (and should) also be available on all websites and applications. [SPEECHLY]

Top 5 computer vision trends that will rule 2021. Computer vision software is changing companies and making the lives of shoppers simpler as well as additionally fascinating. As a field, computer vision has got a lot of exposure and a good amount of investment. The North American market for computer vision programming has had a total investment of $120 million, while the Chinese market flooded to $3.9 billion. [ANALYTICSINSIGHTS]

WeChat Mini Program: an epic guide. 101: what are WeChat Mini Apps? How do they compare to native Apps and H5 mini-sites? [WECHATWIKI]

Computer vision and mini apps have some of the highest adoption rates, after DevOps. 22% of developers engaged with mini apps are working on this technology. For computer vision, this drops to 15%. Robotics, on the other hand, has an adoption rate of just 9%, reflecting the higher barriers to entry here. Robotics hardware is an additional cost in which many developers may be unwilling to invest. 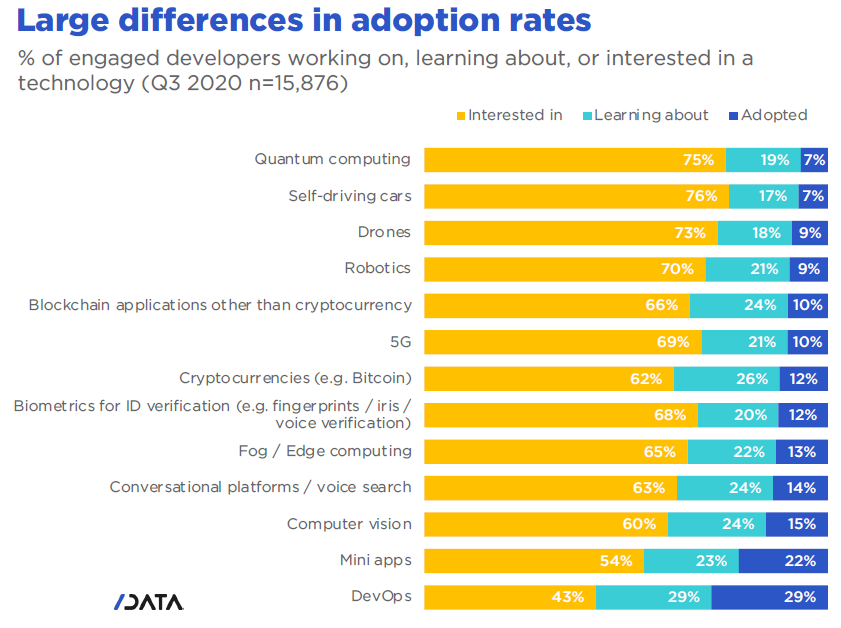 To the brain, reading computer code is not the same as reading language. MIT neuroscientists have found that reading computer code does not activate the regions of the brain that are involved in language processing. Instead, it activates a distributed network called the multiple demand network, which is also recruited for complex cognitive tasks such as solving math problems or crossword puzzles.

Ruby 3.0.0 release candidate 1 is now available. Ruby 3.0.0 RC1 introduces a number of new features, such as RBS, TypeProf, Ractor, and Fiber Scheduler. TypeProf is a type analysis tool that reads Ruby code, analyzes what methods are defined and their uses, and creates a prototype of type signature in RBS format. Currently this feature is still experimental, so it is only supported in a subset of the language and its error detection is limited.

Adobe Flash is going away for real this month. There have been plans to kill off Adobe Flash — the company’s beleaguered software for running multimedia content across devices and websites — for several years, but now the end is truly nigh. [THENEXTWEB]

Firefox 84.0 is now available. This will be the last release that will support Adobe Flash. Highlights from this release include support for link preloading, native support for macOS devices built with Apple Silicon CPUs, and in developer tools, the Firefox Accessibility Inspector now supports displaying the keyboard tab order on a web page. This provides a better high-level overview of how the page will be navigated using the keyboard than simply tabbing through the links.

Google A/B testing a dark mode for Search on desktop browsers. For those of you that love dark mode, Google is now A/B testing a native dark theme for desktop Search. The white background switches to a dark gray hue that matches first-party mobile apps. It can be switched on via a 'Chrome Flags' experimental form. [9TO5GOOGLE]

Linux 5.10 LTS released as one of the biggest kernel releases in a while. Besides being the last kernel release of 2020, this is a significant milestone in that it's also a Long Term Support (LTS) kernel to be maintained for at least the next five years and also is a huge kernel update in general with many new features. Linux 5.10 features new hardware support including early bring-up around Intel Rocket Lake and Alder Lake, continued work on Intel Gen12/Xe Graphics, a number of storage/file-system improvements, and more. [PHORONIX]

Cognitect and Nubank are to sponsor open source developers. Dozens of contributors to the Clojure ecosystem will receive regular monthly support which represents a six-figure per year investment. They are encouraging other companies to join them in valuing and supporting the open source developers who contribute to business success. [COGNITECT]

Windows 10X is arriving next year: What we know so far. According to a new report, Microsoft has already finalized the RTM candidate for Windows 10X. This will now allow OEM and Microsoft vendors to start the work on devices with Windows 10X. The OS is still on track to launch in Spring 2021 to enable unique experiences on PCs from various hardware manufacturers. Reports have also suggested that Windows 10X won't ship with Win32 apps (desktop application) due to compatibility issues. [BLEEPINGCOMPUTER]

Google outage caused by critical system running out of storage. "Google Cloud Platform and Google Workspace experienced a global outage affecting all services which require Google account authentication for a duration of 50 minutes. The root cause was an issue in our automated quota management system which reduced capacity for Google's central identity management system, causing it to return errors globally. As a result, we couldn’t verify that user requests were authenticated and served errors to our users," Google's status page explains. [BLEEPINGCOMPUTER]

Programming language security: These are the worst bugs for each top language. If you're a developer writing code in .NET, C++, Java, JavaScript, PHP or Python, new research highlights the main security vulnerabilities you need to watch out for. [ZDNET]

Build applications on the XDC Network with Tatum

Top 4 Reasons to Launch Your Streaming Service on Roku