Most people who are involved in AR or VR are hobbyists, and not just in AR & VR. These people are more likely to be hobbyists in every other sector than people not involved in AR or VR. They are technology enthusiasts who like to experiment outside of their professional duties, and are currently experimenting with AR & VR, potentially with a view to incorporating AR & VR into their existing development projects.

Looking at this from the other side, 28% of VR professionals also consider themselves to be hobbyists in the same sector. Out of AR professionals, 24% take on AR projects in their spare time as a hobby. This is higher than most other sectors, with machine learning being the next highest at 26%, then games at 25%. This shows that AR & VR practitioners are enthusiastic about the sector, often having passion projects on the side.

We also see more diversity in the type of roles that AR & VR practitioners do. Because AR & VR sit at the intersection of arts and technology, practitioners often fulfill hybrid (both technical and non-technical) roles. In fact 35% of AR practitioners fulfill a hybrid role. Subsequently, people involved in AR/VR are less likely to be 'Pure Developers' (people solely fulfilling developer-type roles) than those involved in other sectors. This difference is especially pronounced for respondents working in VR or in AR and VR, with only 34% and 38% respectively working solely in developer roles, compared with 50% of respondents working in AR only. 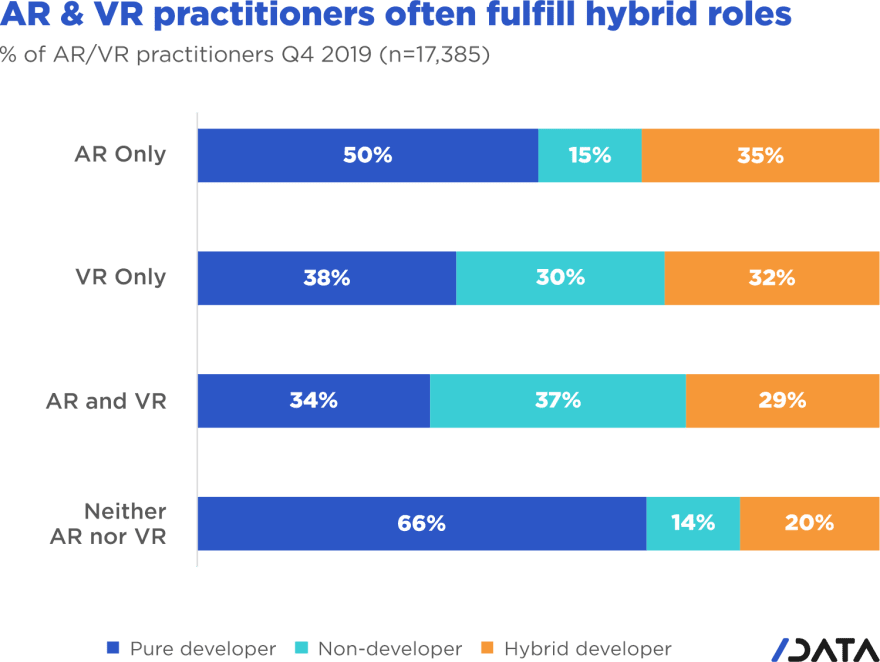 Practitioners who are involved in VR only, or VR and AR are more than twice as likely as their counterparts who are only involved in AR to be in non-developer roles. This shows that non-developers tend to favour working in VR in some capacity.

Drilling down into the roles, we see that 49% of AR practitioners work as programmers or software engineers, compared with only 37% and 32% respectively for VR practitioners and those who work in both AR and VR. Many AR practitioners are also involved in web & mobile development and machine learning. This suggests that these coders are interested in AR from a technical point of view, looking to challenge themselves by using the latest technology or to implement AR in their projects.

On the other hand, VR practitioners and those involved in both AR and VR are more than twice as likely as AR practitioners to be game designers or work as product managers. The popularity of these roles reflects the quick uptake of VR by the game market - moving from being an emerging technology to generating revenue.

Not only do AR & VR practitioners hold different roles compared to people involved in other sectors, but they also wear a lot of different hats. More than 20% of people involved in AR or VR take on 4 or more roles, compared with only 12% of people involved in other sectors. We already know that AR & VR developers are often passionate hobbyists, but it’s also clear that they have diverse interests and skills. This diversity comes from the fact that as AR and VR development technology matures, tools are appearing which require fewer technical skills to create an AR or VR product. This attracts non-developers who can more easily realise their vision.

This is number two in our series of posts covering AR and VR practitioners. You can view the first post here.

Are you a hobbyist in the AR or VR? What tools you do use? Our State of the AR/VR survey is live. Spend less than 10 minutes and shape the future of Augmented and Virtual Reality. We have some awesome prizes up for grabs - an Oculus Quest, iPhone 11, VR Ninjas mat, and licenses to be used with Vuforia, Sketchfab and OctaneRender Studio.

So you want to get started with AR.js

Developer Nation
Our mission is to champion a global collective of software creators who are confident in their technology choices and feel included in the conversation about the future of the ecosystem.
AR Engines, tools and SDKs
#arvr #ar #engine #resources
[SERIES] Did you know? Games is the most popular app category for developers and non-developers alike?
#gamedev #game #ar #arvr
[SERIES] Did you know? 22% of AR/VR non-developers are learning to code
#ar #programminglanguages #beginners #nocode
Forem Open with the Forem app