Hey there, here's a copy of our latest newsletter that we sent to our subscribers. Hope you find the resources useful! 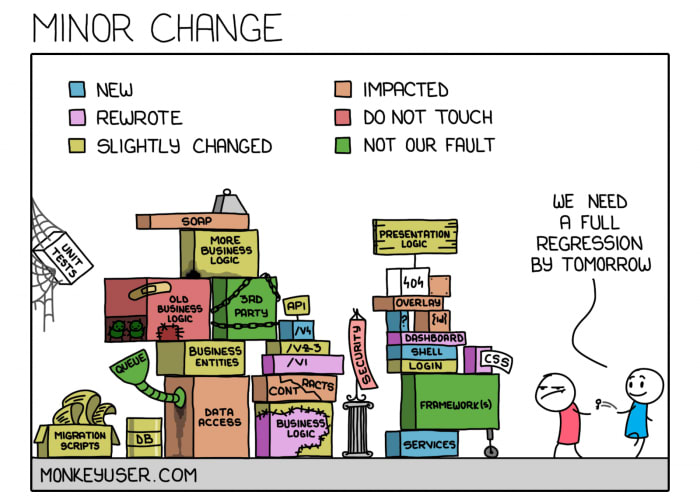 We have something exciting: have you ever wondered how many developers there are like you around the world? Now you can get an instant answer with our Developer Population calculator!

Our subscriber Sadullah Dogan has released their app Jelly Shift. Space, do give it a try.

Now on to you. What was the most rewarding thing for you this week? Have you got a cool project/app/script to share with us. Let us know below and perhaps we'll feature it in our next newsletter.

Get your software right: how to write great frontend tests.What are front-end tests? Why are they important? How do you make the most of them? We'll answer those and more questions in this post. [TESTIM]

Infographic: What did developers do during Covid-19 outbreak?Who worked remotely, who did all the cooking, and who missed travelling? We polled 138 developers from our own community to find out. This light-hearted infographic sums up which lifestyle changes developers had to make. [DEVELOPERECONOMICS]

Building Serverless GraphQL API in Node with Express and Netlify. At the end of this article you'll be able to deploy your very own API without the headache of managing a server. [CSS-TRICKS]

How to add voice to your PowerShell scripts. Did you know you can call upon the .NET classes library in Windows to enhance your PowerShell experience? One of those ways is to use .NET to teach PowerShell how to speak to you! [ADAMTHEAUTOMATOR]

You will never be a full stack developer. Or, career advice for the working web dev. [SELDO]

Load testing a web application's serverless backend. Many web applications experience high levels of traffic and spiky load patterns. The goal of load testing is to ensure that the architecture and system design works for the amount of traffic expected. It can help developers find bottlenecks and unexpected behaviour before a system is deployed to production. [AWS.AMAZON]

A beginner's guide to robot programming with Python. Robots are already doing so much for us, and they are only going to be doing more in the future. While even basic robotics programming is a tough field of study requiring great patience, it is also a fascinating and immensely rewarding one. [THENEXTWEB]

Android Studio Shortcuts — How to manage the IDE without a mouse. To be more efficient and faster while developing and to stop searching for your mouse to navigate through your code, use shortcuts. [PROANDROIDDEV]

Autogenerate changelogs and manage releases using Conventional Commit. Writing changelogs for a project can be tedious. Usually, this lengthy process would start with your project manager, organizing your tickets in the sprint (depending on how your project is organized), and taking time out of the day to write the changelog itself. This process becomes even more complicated when working on developer-centric projects. [UNICORN-UTTERANCES]

Only 2 weeks left to take the Developer Economics survey!

Time is flying. You have an opportunity to influence how the world will see developers beyond 2020. Take 10 min today to answer questions about your programming skills, favourite tools, platforms, and technologies. In return, you'll have a chance to win an iPhone 11, OnePlus 7T, Jet Brains All Products pack, licenses, Amazon vouchers, dev swag and more!

State of the Developer Nation 18th Edition - Q4 2019 - The report focuses on six major themes - each with its own visualisations, showing how the data lends insight into the developer community. [Developer Population Calculator]

Docker collaborates with AWS to help developers speed delivery of modern apps to the cloud. "This is a big step toward giving developers the best experience building, sharing, and running cloud-native apps with Docker and Amazon ECS," said Docker Chief Executive Officer Scott Johnston. "This experience allows developers to work locally and take the same experience into a production-scale cloud service with Amazon ECS, reducing the span of knowledge needed and accelerating their time to production." [CONTAINERJOURNAL]

New study finds tech sector job interviews assess anxiety, not software skills.A study from North Carolina State University and Microsoft finds that the technical interviews currently used in hiring for many software engineering positions test whether a job candidate has performance anxiety rather than whether the candidate is competent at coding. The interviews may also be used to exclude groups or favour specific job candidates. [NCSU]

Everything you need to know about OAuth (2.0). How to provide delegated access without putting the end user's data at risk? Check the latest improvements in the OAuth protocol flow. [GRAVITATIONAL]

EU strikes down key US data sharing protocol, citing threat of mass surveillance.The European Union's top court has invalidated a key data-sharing protocol that allows American companies to transfer personal information about EU citizens to the US. The court says the regulation, known as Privacy Shield, is invalid as it does not protect EU citizens from mass surveillance programs operated by American intelligence agencies like the NSA. [THEVERGE]

Reasons to use Next.js instead of create-react-app in your next project

Developer Nation
Our mission is to champion a global collective of software creators who are confident in their technology choices and feel included in the conversation about the future of the ecosystem.
The best VS Code extensions / do app store rules matter?
#news #mobile #webdev #backend
Announcements from Shopify / Microsoft / AWS / PHP / Challenging the myth that programming careers end at 40
#news #webdev #mobile #backend
Announcements from Microsoft / Apple iOS 15 / skills senior engineers need beyond coding
#news #webdev #backend #mobile