Did you know that, in the 1960s, more than 1 in 4 programmers in the US were women? These days the gap is much larger: only 1 in 10 programmers is a woman. What has changed? We use our data to assess the gender gap.

Woman in the history of programming

There are women in the history of computer programming who contributed to shaping what we now call software development. In the past though, there were just far more women as a percentage of programmers than these days. According to US government statistics, by 1960, more than one in four programmers were women. Our data shows that this number is currently down to only 1 in 10. What has changed? A lot, including the status ascribed to being a programmer.

Back in the ’60s, being a programmer required a person to ‘simply’ be logical, good at math, and meticulous—characteristics which were stereotypically ascribed to women because of their experience in activities like knitting and weaving. Programming was also viewed as a mere administrative task; initially there was a lot of card-punching involved, and later also typing. Moreover, programming attracted many neophytes. Nobody was expected to know how to code; programmers-to-be would be hired after proving their logical reasoning and then trained on the job.

Those were flourishing years for women in programming: it was one of the very few occupations in which they could prosper. And in fact, by 1984, 4 out of 10 students graduating with degrees in computer and information sciences were women.

Then, something changed: the bar for being a programmer was raised as more and more students owned a personal computer and would show up at college having already gained experience in programming. As Fisher and Margolis reported, boys were just much more likely to be exposed to technology than their female counterparts. This is when the gender gap in the tech industry started becoming larger, and women in programming were left behind in the career race.

At SlashData, we survey more than 30,000 developers annually across the globe to understand who they are, what technologies they use and how happy they are with them. In this case, we used our data to assess the gender gap, and to ultimately understand how it may be filled. The data presented here comes from the 18th edition of our Developer Economics survey, fielded between November 2019 and February 2020.

Our findings suggest that, after 40 years, the race is still strongly biased against women. Despite personal computers being ubiquitous, and careers in programming widely known to be lucrative, female developers are still an overwhelming minority.

Female developers tend to be younger than male developers. Our data shows that 68% of women are between 18 and 34, compared to 59% of men in the same age group. Their comparative youth reflects the fact that women have only recently begun to take their seats back as programmers. 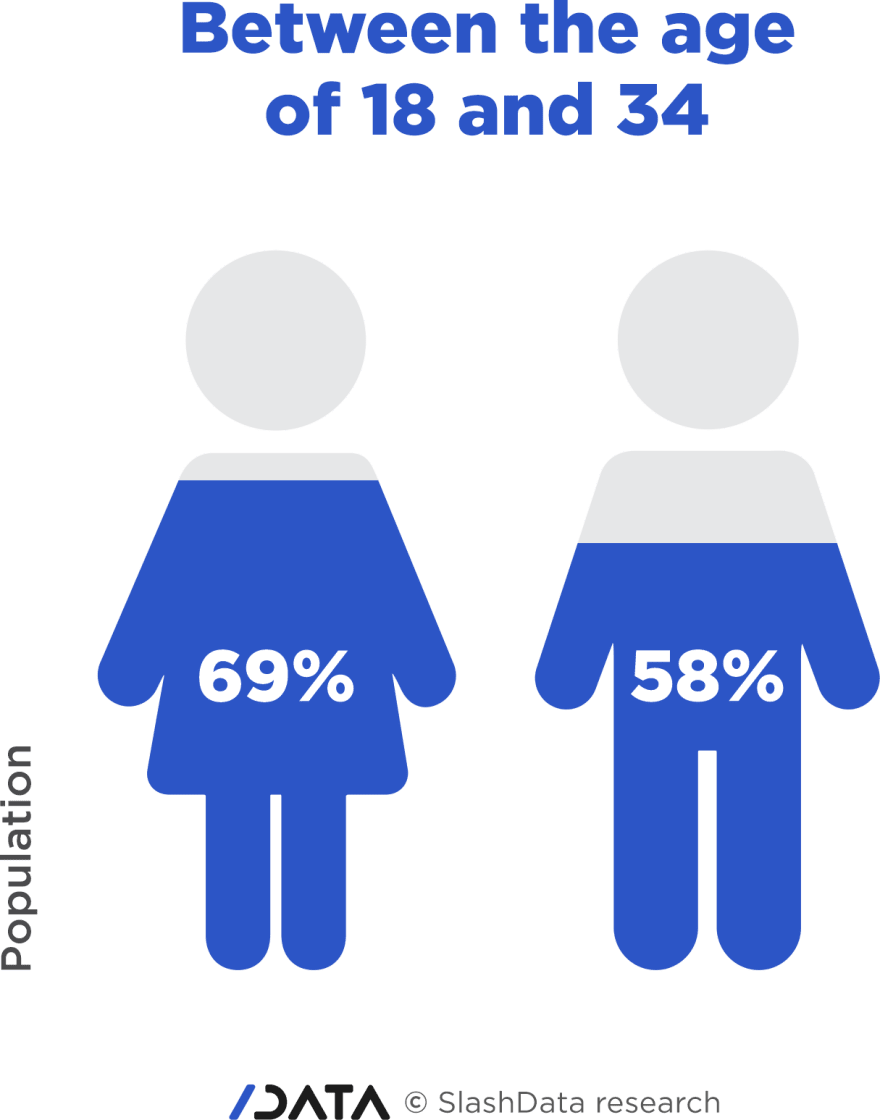 Yet, the most striking difference is not in terms of age, but inexperience. Male developers have more years of experience in software development than women. While nearly 5 in 10 male developers have six or more years of development experience, 5 in 10 women have little experience (2 years or less), and just 3 in 10 are seasoned developers. As we saw, women seem to become developers later in life than men. However, the age difference we observed is not enough to explain on its own this imbalance in terms of experience. Another likely driver behind this result is that women tend to occupy more creative roles than men in the development ecosystem, and as part of those roles they don’t always need to have strong development skills. 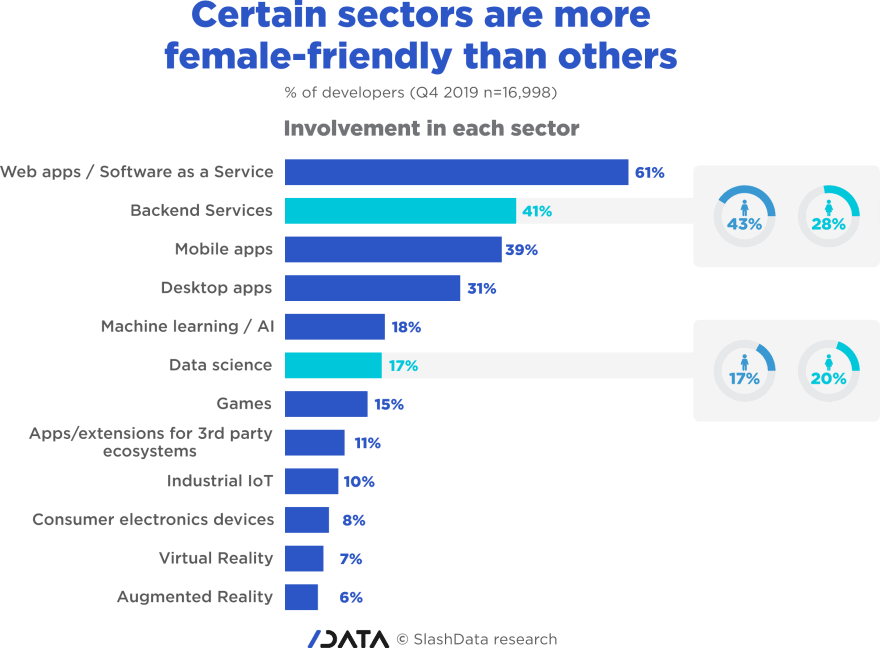 Looking at the relative involvement of men and women in the various development sectors, we find that female and male developers are not similarly attracted to all sectors. It’s clear, for example, that men are drawn far more into backend services – the second largest development sector overall – as compared to women. Male developers are in fact 15 percentage points more likely to be involved in backend services than women. On the other hand, sectors such as data science appear to attract a roughly equal proportion of women and men.

Why is that? Backend tends to be the realm of seasoned developers, who are on average more experienced than developers involved in other sectors. The barrier to entry may be quite high for female developers who, as we saw, are more likely than men to be just starting to explore the world of development. On the other hand, data science is a less mature sector; the bar in terms of experience required is still quite low – more than two-thirds of the developers in data science report having 2 years or less of experience.

Non-technical roles are more accessible/appealing to women than others 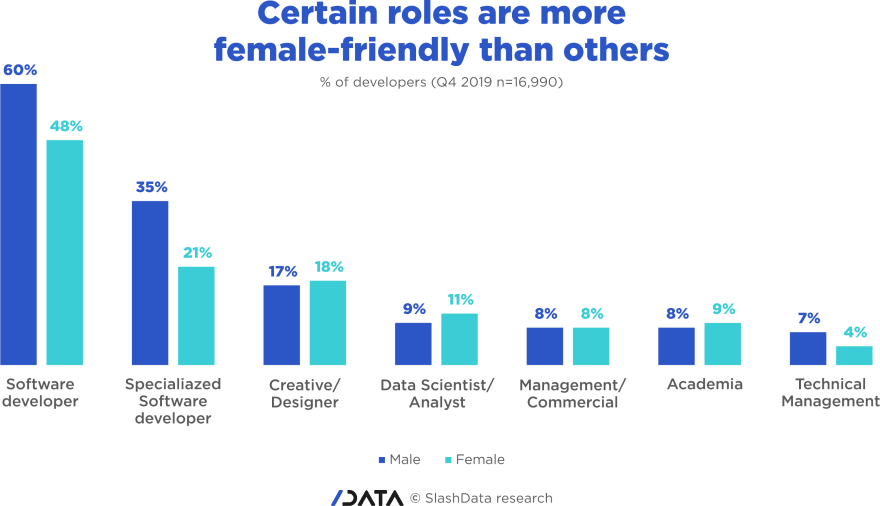 In our Developer Economics survey, we collect data from all those involved in software development, and that includes roles that are not strictly technical such as product managers of technological solutions, designers, or CEOs/CTOs. This gives us the chance to look at differences between women and men in terms of the roles they take on.

Our data shows that despite software developer being the most popular role among women, it is far more common among men. The same goes for more specialised roles (such as architect, system administrator, DevOps specialist) or technical management.

On the other hand, non-technical roles appear to be more accessible/appealing to women. Academic roles, such as researcher or professor/mentor attract an equal proportion of men and women. The same holds for roles such as designer (such as product designer, UI/UX designer) or product/sales manager.

In a previous piece of research, we found that professionals in managerial or commercial roles prefer more ‘social’ activities, compared to software developers who are more interested in ‘lone’ learning activities, such as experimenting with code and watching videos. Managers improve their skills by working together with friends and colleagues, but also with mentors or teachers. These findings suggest that there may be differences in learning/working styles that contribute to shaping which roles are more appealing to women versus men.

In this brief analysis of the gender gap in programming, we showed that female developers are less numerous, younger and less experienced than their male counterparts. We also showed that men and women are not equally drawn to the different development sectors, backend being a key example. Similarly, non-technical roles, such as that of a product designer or a marketing manager, are also more accessible or attractive to women. On top of having limited experience in software development, differences in learning and working styles may influence which roles appeal to women the most.

Interested to see more insights like this? Check out our latest research reports and graphs based on data from developers who took our global surveys.