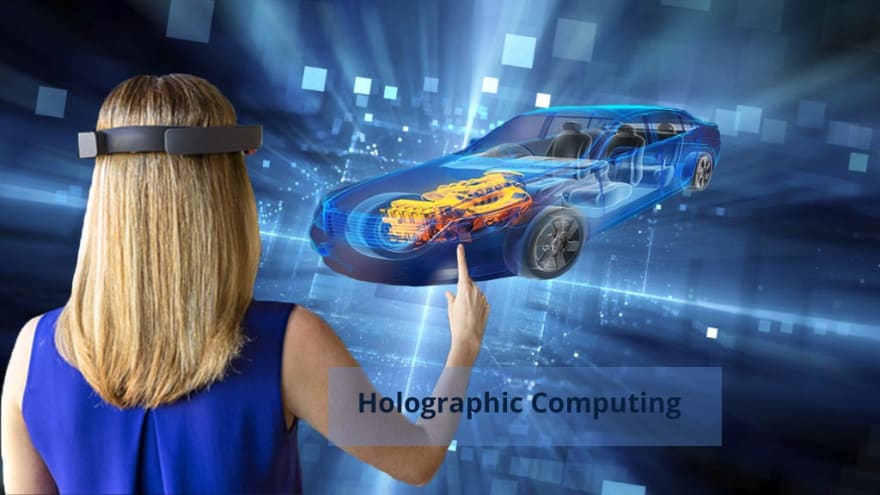 The generation that has entered into the workforce in the 21st century have been fantasized by the idea of holographic computing. Movies from Marvel and DC comics have repeatedly shown holographic computers like Jarvis in Iron man series but no one would have imagined that it will become a reality as soon as it happened with us in real. Microsoft’s HoloLens project has moulded this fantasy into reality with the help of sensors, neuroscience, artificial intelligence, virtual reality headsets and augmented reality.

Microsoft’s HoloLens project (A holographic computing project) that was mainly available for large scale companies has been made available to developers as mixed reality software development kit which can be used by anyone to make mixed reality apps. Before we discuss further there’s a need to draw the lines between virtual reality, augmented reality and the mixed reality that separates them.

The content is made in such a way that it places the user on the point of reference and the view changes according to the direction where he/she is looking. This is why 360-degree cameras and VR headsets are used.

In Augmented reality, the user can interact with content that was being created under the virtual reality segment. We can touch a virtual pet and expect a response in return. Pokémon Go is an example of augmented reality.

Mixed reality is a segment where the virtual world maps the real world and the behavioural response will change accordingly. Now you can have a virtual cat that will know whenever a mouse in the real world is there and she will run after it.

Now it is clear that mixed reality app development is under the limelight because it will create apps where both worlds real and virtual will be able to interact with each other. Holographic computing apps with a vision are being developed for deployment into the following industries:

Whenever a company has to develop a new vehicle, they create its 3-D design in AutoCAD and create its prototype to test it in the real world. Although AutoCAD is pretty informative about stress on components of the vehicle and suggests dimensions of material that should be used, but it is not enough for the real-world scenario that’s why prototypes for testing are made. Due to larger costs in creating prototype companies are restricted with the number of tests they can perform so products usually fail to reach the level of perfection. With AI and mixed reality, these tests can be run in the virtual world and the data from these tests can be fed to AI trained models recursively to procure maximum level of perfection for products. Volkswagen has been using mixed reality apps for designing cars from the birth of first-generation Microsoft HoloLens.

Automation has been a part of our lives for a while and it is moving from large scale industrial machines to micro-sized machines. The industry is facing almost similar kind of problem that the automobile industry is facing, lack of data which can be gathered with recursive testing procedures. Automobile and automation industries are developing at a slower pace than software industry so the conventional method of real-world recursive testing will not bring the parallel level of development in all industries. Therefore, virtual world testing environment is required from which the data can be gathered at a rapid pace to derive automation to Nanosized machines.

Surgeons face issues while performing a surgery it gets really difficult to locate clots and other things that have to be removed in the process. Mixed reality apps are intended to help surgeons where they will be able to plot 3-D views from CT scan, MRI, Sonography etcetera in real time and can zoom in or out to help them in surgery.

Imagine the games where you will able to play games at home for which you had to go to amusement parks. The characters in games can map the real world and use the plants, bushes and trees around you in the real world to hide in a close combat warfare game.

The use cases and possibilities with holographic computing is yet to be explored. Let’s wait and watch what this mixed reality app development kit in developers’ hands will bring to the table.

Is it possible that the software industry could become nearly 100% remote?

Not to say that remote work is a flawless solution, but it is certainly a trend gaining in popularity...

Using Scoop to Manage My Dev Tools on Windows 10

Trending on DEV
Is PHP Dying?
#discuss #php #watercooler #mjasks
What type of coffee you like?☕☕☕
#discuss #watercooler #developer #coffee
Can you recommend interesting software engineering blogs you follow?
#discuss #techtalks #computerscience #software
Please be professional and stop saying "I'm almost done!"
#beginners #bestpractices #communication #career
Mar. 27, 2020: What did you learn this week?
#weeklylearn #discuss #weeklyretro
What was your win this week?
#discuss #weeklyretro
From Web Developer to Head of Technology in under 5 years, AMA
#ama #webdev #career #discuss
What is a project, you are really proud of?
#discuss #watercooler #webdev #mjasks