Implementing a state management in modern web Angular applications can be tricky.

There are many libraries, such Ngrx, ngxs, Akita, which can be integrated to manage stores but, these are strongly opinionated and have impact on the architecture of the solution.

If we omit the concept displayed by Jonas Bandi in his interesting article, a common alternative to not using 3rd party libraries, is the development of custom stores with RxJS.

In both cases, libraries or custom, RxJS is used 🤷‍.

Even though RxJS is a wonderful piece of technology, is nowadays a de facto standard when it comes to Angular development, and installed per default with almost any starter kits, it can be still opted-out.

That’s why I was interested to get to know if it would be possible to develop an Angular application using a modern state management but, without using RxJS.

To narrow the goals of the experiment, these are those I was looking to test:

Let’s try to answer these questions, but first, let setup another kind of state management.

The @stencil/store is a lightweight shared state library by the StencilJS core team. It implements a simple key/value map that efficiently re-renders components when necessary.

I use it in our web open source editor for presentations, DeckDeckGo, and I have to admit, I kind of have a crush for this lightweight store. It is so bare minimum simple, and effective, I obviously selected it to perform my experiment.

Even though it would work out of the box with Angular, note that I had to create a fork. The Webpack’s build was complaining about it and, since we do not need this requirement in case of an Angular usage, I just removed it.

If I, or anyone, would use it for a real application, the library dependency could be patched easily I am guessing.

Before going further, note that this experiment’s source code is available on GitHub.

To set up for such a store for an application, we can create a new TypeScript file, such as clicks.store.ts , and use the createStore function exposed by the Stencil Store.

That’s it. It is the minimum to expose a global clicks store for an app.

Because I was eager to give a try to the few other features of the store, I also added the usage of the functions onChange , to test if property listening to changes would also be re-rendered, and the dispose feature needed for testing purpose.

Pretty slim in my humble opinion 😉.

It is also worth to notice that it is possible to create as many stores as we would need.

I tried different ways to use the properties of the store in the templates and, figured out that the easiest way was to bind the state with a component’s variable.

It can then be use in a template to display the values of the store.

Does it get re-rendered, when the store changes?

To try out this hypothesis, I added a function to the component, which increments the clicks.

Therefore, if everything works as expected, each time I would call the above function, the clicks should be incremented and displayed and. Because I registered an onChange on such property, the count should be actualized with twice the value.

It exactly behaves as expected. Store properties are modified and, the layout is re-rendered. In addition, I did not have to implement any custom change detection calls or what so ever.

The second question I was looking to answer, was related to sharing data between routes. To answer it, I created another page component, added it to the routing and used the store exactly in the same way as previously.

If this would work out, once I would navigate, I would find the exact same value in each page without having to implement anything else respectively without the need to pass values between routes.

Indeed, stores data can be shared between routes.

Likewise, instead of routes, are data accessible from a component?

To test this hypothesis, I refactored the page2 to move the code to a separate component card .

I then used it in page2 . Note that doing so, this component, page, does not have to include the store anymore.

As for previous test, this would be validated, if values would be displayed and updated even if use in a child component.

As previously, it works as expected.

I was asking my self if data could also be used in providers , therefore I added a service to test this specific question.

If I call the service’s function, an alert should be triggered and the current count value of the store should be displayed.

Therefore, I created a test which should increment the clicks and validate that the value has, well, been incremented.

If this would be correct, the test should pass. 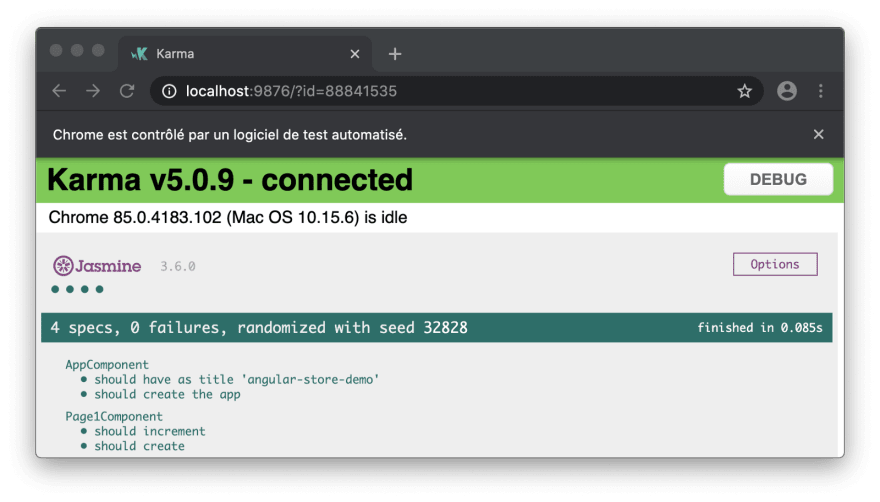 It is possible to use the store in unit tests and thus, without any particular headache. It works in tests the same manner as it work when used in the application.

All hypothesis, re-rendering data, accessing these and testing the store were a success ✅.

The scope of this experiment was to some extension, limited and, it might need a bit more analysis before being applied to a real life application. I think in particular at the following questions:

If you are interested in these questions, let me know. I would love to hear from you, to get your feedbacks and would be happy to continue the experiment 😃.

Honestly? I am that close to find a new idea of application, just to try out concretely the Stencil Store in a modern web Angular application. There is often no better way to experiment, than developing a real application.

Reach me out on Twitter and, why not, give a try to DeckDeckGo for your next presentations!

It deploys your decks online as Progressive Web Apps and can even push your slides’ source code to GitHub.

Use Humans.txt to credit your team for a project