I was quite surprised at a recent blog post by Uncle Bob Martin, titled: "Type Wars", in which he writes: "Therefore, I predict, that as Test Driven Development becomes ever more accepted as a necessary professional discipline, dynamic languages will become the preferred languages. The Smalltalkers will, eventually, win."

This statement didn't sit well with some people ​in the static typing community, who argued that in a sufficiently advanced statically typed language, types are proofs and they make unit tests mostly redundant​. Haskell even claims that "once your code compiles it usually works"​!

Be it safer refactoring, better documentation, more accurate IDE support or easier to understand, for me all these claims translate to a simple promise: less bugs.

And I really hate bugs. I find them to be one of the worst wastes of time and energy for a project, and there is nothing that annoys me more than getting to the end of iteration demo and the team being somehow proud of saying, "We did X story points and we fixed 20 bugs! Hurray!"

To me it sounds like, "In the last iteration we wrote more than 20 bugs, but our clients were able to find just 20! And we were paid for both writing and fixing them! Hurray!"

With that in mind, I tried to find some empirical evidence that static types do actually help avoid bugs. Unfortunately the best source that I found suggests that I am out of luck, so I had to settle for a more naïve approach: searching Github.

The following are some charts that compare the "bug density" for different languages. By bug density I mean the average number of issues labelled "bug" per repository in GitHub. I also tried removing some noise by just using repositories with some stars, on the assumption that repositories with no stars means that nobody is using them, so nobody will report bugs against them.

Round 1. Lang​​​​uages sorted by bug density. All repos 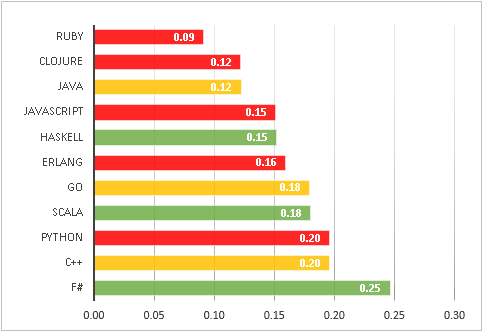 Round 2. Language​s​​ sorted by bug density. More than 10 stars repos 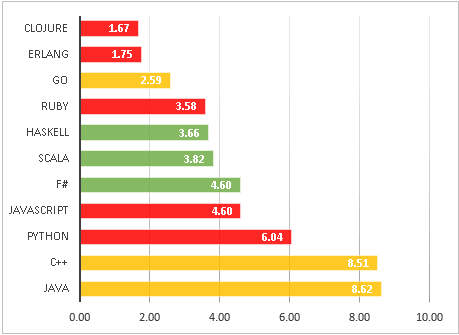 Round 3. Languages sorte​d by bug density. More than 100 stars repos 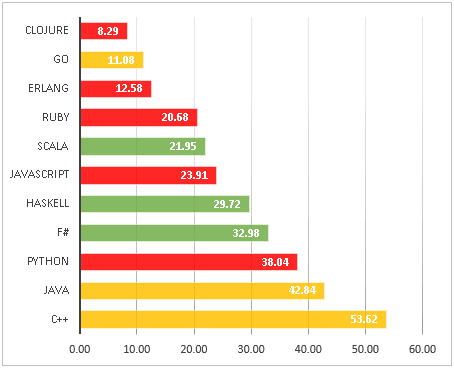 Whilst not conclusive, the lack of evidence in the charts that more advanced type languages are going to save us from writing bugs is very disturbing.

Static vs Dynamic is not th​​e issue

The charts show no evidence of static/dynamic typing making any difference, but they do show, at least in my humble opinion, a gap between languages that focus on simplicity versus ones that don't.

Both Rob Pike (Go creator) and Rich Hickey (Clojure creator) have very good talks about simplicity being a core part of their languages.

What characterizes a simple language? Listing the things in common between Go, Erlang and Clojure, we get:

Maybe all those shiny things that we get in our languages are actually the sharp tools that we end up hurting ourselves with - creating bugs and wasting our time - and that all they do is bring a lot of additional complexity, when what we really need is a simpler language.

Contravariance in the real world

Programming by Coincidence (Don't Do It)

Dan Lebrero
Technical architect with more than 15 years of software development experience. A long time Java practitioner, he now also loves ().
16 Libraries You Should Know as a React Developer 💯🔥
#webdev #coding #react #productivity
Why "Do Your Own Research" is terrible advice
#career #money #healthydebate
Have you ever seen anyone "fake" their way into a software development position?
#discuss #career #watercooler

Once suspended, danlebrero will not be able to comment or publish posts until their suspension is removed.

Once unsuspended, danlebrero will be able to comment and publish posts again.

Once unpublished, all posts by danlebrero will become hidden and only accessible to themselves.

If danlebrero is not suspended, they can still re-publish their posts from their dashboard.

Once unpublished, this post will become invisible to the public and only accessible to Dan Lebrero.

Thanks for keeping DEV Community 👩‍💻👨‍💻 safe. Here is what you can do to flag danlebrero:

Unflagging danlebrero will restore default visibility to their posts.