Dealing with errors in Graphql is a topic on which there are numerous articles and recommendations, but there are not many real-world examples of how to implement a concrete approach under a given language and GraphQL server.

This article tries to show the concrete implementation of stage 6a mutation error handling from Marc-Andre Giroux Guide to graphql errors under Hotchocolate (.Net) GraphQL Server including some base integration with MediatR.

These are the advantages of the 6a approach:
✅Pro: Expressive and Discoverable Schema
✅Pro: Support for Multiple Errors
✅Pro: Easier Evolution

Before we begin, let me show you an example from the playground of 6a error. The pattern allows you to choose whether to use one concrete type as the union or group them all together using the common IBaseError interface: 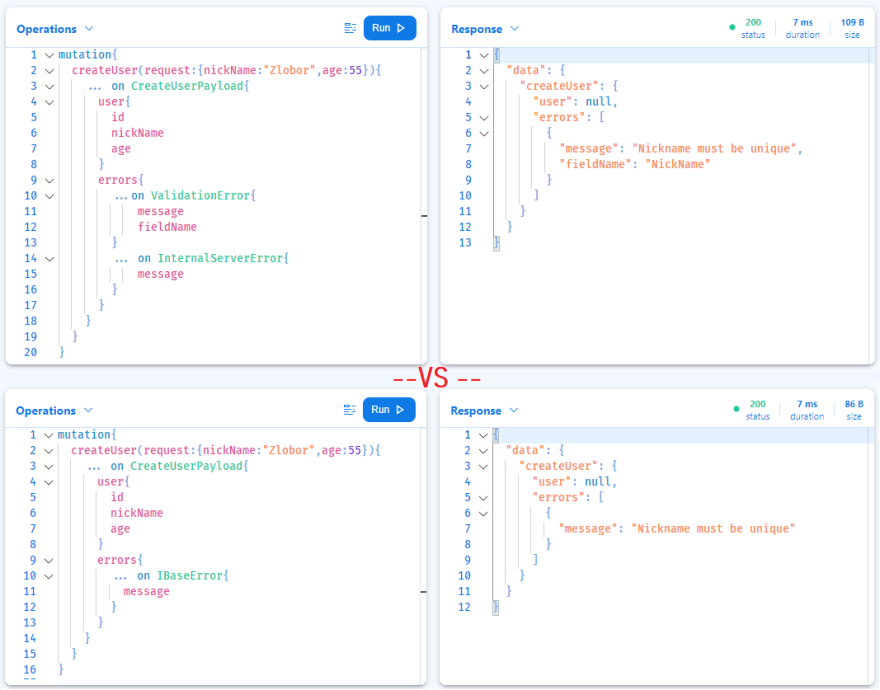 ⠀
NOTE: Please make sure you have already read his article, because my article does not explain the advantages or disadvantages of the different approaches. I only take the most recommended approach (6a) and show the implementation under Hotchocolate GraphQL Server.
⠀

⠀
The full demo sources with frontend and backend can be found at the end of this article!
⠀

Before I explain the specific mutation error handling and schema design, let us first understand what kinds of errors we may face in Fronted. To explain this, think of the errors as different groups with different purposes. I have classified them as follows:

Each mutation can return multiple errors. For example, the most common errors you can get back are:

You can also specify any other contextual error, such as UserDeactivated or PostIsNotPublished, depending on the state of the object in your system. This way, you can control the user experience in UI and respond differently depending on the error type returned. And each error type can contain different fields.

⠀
NOTE: To learn more about the different approaches to dealing with mutation errors, please read the article by Marc-Andre Giroux Guide to graphql errors before reading on. This should help you understand the advantages and disadvantages of each option he presents.
⠀

These are the theoretical concepts and in this article I will show you the basic implementation of the most recommended pattern 6a using unions and interfaces.

There are some packages you need to use with my demo. The main ones are:

Let me go back to Marc's example of the 6a schema from the article I mentioned:

These are 3 important points from schema definition

Since MediatR is used to fire and process the commands, you can create a generic abstraction that can help you with authorization and validation and provide a PayloadBase abstraction.

A few lines below is an example of application command CreateUserand these are parts of that file:

As you can see, everything related to a command is in a file. This helps with orientation if your system has multiple commands to keep the context in one place.

The BasePayload implements IBasePayload. This ensures that all commands support the most important features that help you add errors!

All payloads allow you to add some errors to it. The errors are defined in a grouped file. This is an example of an error definition. (For large projects, you can put it in a subclass depending on the context).

And this class implements the common error interface IBaseError, which allows you to simply search for common fields like message instead of specifying a concrete type.

MediatR supports the integration of custom pipelines. This allows you to create custom validation and authorization handlers for each command triggered by the mediator. This helps us to create a small abstraction and reuse the authorization and validation logic for all commands.

This also allows the authentication and validation errors to be handled automatically by the pipeline.

The validation behavior selects all validators available for the specific command and performs the validation process.

You can customize this logic to your needs!

You can customize this logic to your needs!

Until now all was +- related to the application logic, which prepared everything that was important to integrate proper error handling into the GraphQL layer.

For schema configuration, I will use the pure code approach. I like this the best because everything is tightly defined in your code. The downside is that multiple objects need to be defined.

Let us first create the root types query and mutation:

We need to create the extension UserMutations of the base class Mutation and add some mutations to it:

As you can see from the code, the mutation CreateUser takes an input object and transfers it to the command MediatR. This command returns CreateUserPayload, which is returned as the response type.

Define ObjectTypes for each Erros. In general, they can contain custom resolvers and fields. To keep this demo simple, implement only the IBaseError interface.

Finally, set up all the created ObjectTypes, Unios and Interfaces in your GraphQL server configuration:

This is an example where the mutation "Create user " was triggered. (This has nothing to do with user management, but is just a dummy example):

This is an example of CreateNewUserMutation, which already uses the shared IBaseError to get the message field and publish this error with the toast component.

This is an example of a validation error returned via the IBaseError interface (in case of error):

This will give you a proper typed error object with Typescript to respond to this response.

These are generated types when only IBaseError is used:

You can also rewrite your mutation to query for specific error types if they contain some error-specific fields:

This is a json response and fieldName is a special field that is only present with type ValidationError!

And these are the types generated by RelayCompiler

1) Make sure you have Net 5.0 SDK installed. You can cheque the SDK version by running: dotnet --list-sdks in your terminal.

NOTE: This may take some time since all node_modules of Frontend SPA needs to be installed on first startup.

5) After succesfull restoring cd to Src/API/ and run dotnet run.

In case you have error with certificates. Install Dev. Certificates:

The source project of the article is available in this repo:

I also have an free advanced example of a fullstack app (workshop):

This second link is an example of an open source fullstack app that also covers this topic, but is more complex and difficult to understand as it consists of different microservices and shows identity and distributed tracing and logging configuration.

A Story Of React States.

How to use Preact with Astro