Since the beginning of our times, that quality has always been a focal point at Coletiv and we pride ourselves by enforcing processes that prevent bad code from getting into production.

Among others, continuous integration (CI) and continuous deployment (CD) have been since day one standard steps in our quality assurance (Q&A) process for all our projects.


Being heavy users of git, especially GitHub we couldn’t wait to get our hands into GitHub actions and experiment if it could be a good fit for our Q&A process. According to GitHub:

We decided to try it on a ReactJS project and evaluate if it could be part of our tool belt.

A very common setup we use in our projects is to have a production and a staging environment, we mirror these environments with two branches:

This means that every time there is a pull request into one of these branches, we run the continuous integration steps (e.g.: run unit and integration tests). If the steps don’t report any error and other developers approve the code it is merged into the branch, triggering a deployment to the respective environment.


This is what we are going to implement in this tutorial. But let’s stop with bla bla bla 🙊 and let’s get our hands dirty! 🛠

Translating this into a human-readable form, we are creating a workflow/action named Continuous Integration that runs on every pull request.

This workflow consists of a single job called Build and Test that runs on ubuntu-latest. The job checks out the code submitted in the pull request then installs all the dependencies, creates a build, and runs all the tests once by passing the --watchAll=false option.


If any of the steps fail, the whole workflow fails and reports back to the pull request. As a best practice, we always enforce the checks to succeed before allowing code to be merged.

Feel free to add more (quality control) steps like enforcing a linter to run so that code that does not comply with coding guidelines doesn’t get merged.

For more information on the structure and all possible options you can use on a workflow file you can visit the workflow syntax for GitHub.


To test the newly created workflow, just push your branch, create a pull request, and observe the workflow take place and report the status back to the pull request: 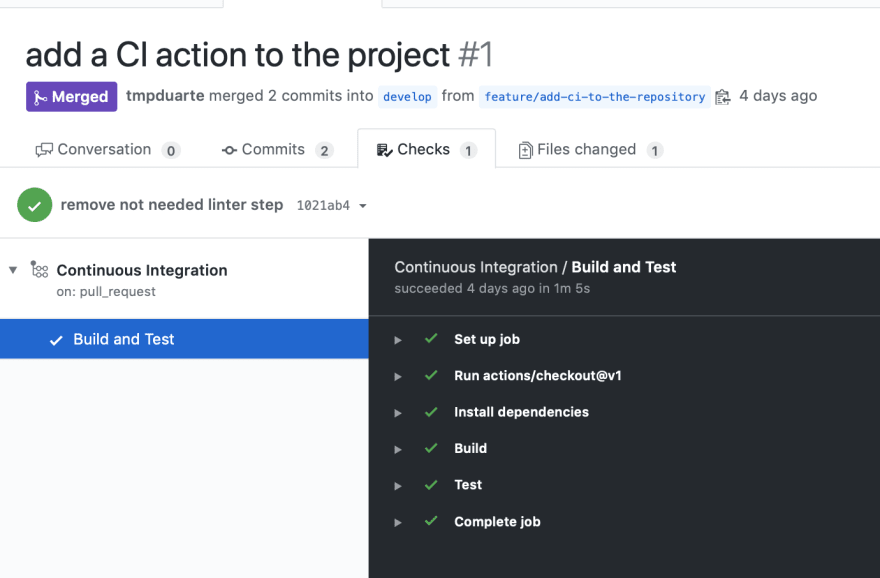 We decided to host our application on two distinct Amazon S3 buckets, one for each environment (staging & production).

Feel free to use any other host for your application (e.g.: your server) but keep in mind that you might need a different action to sync the build files (e.g.: ssh deploy action).

Let’s translate again this into a human-readable form. We are creating a workflow named Continuous Deployment that runs every time code gets pushed to either the develop or the master branch.

This workflow consists of a single job called Deploy that runs on an ubuntu-latest machine. The job checks out the freshly pushed/merged code, installs all the dependencies, creates a build, and deploys the build folder into the AWS S3 bucket.


If you look closely we have introduced a few new things concerning the CI action:

You might have noticed that in the workflow defined in the previous step we would deploy to the staging environment code merged/pushed on both develop and master branches.

It is now time to deploy each branch to its respective environment. Update the steps key in the continuous-deployment.yml file with the following code:

We now have two deploy steps, one for staging and one for production, that only run when the code is merged/pushed to their respective branches. We achieve this by having an if key that checks which branch triggered the workflow: if: github.ref == 'refs/heads/branch_name'.
The two steps differ in their name, if and env keys.


We tried different solutions to avoid step duplication, but all of them seemed very contrived.

We opted for a more explicit solution, although we are aware that it has a certain level of duplication. For example, if there is a new release of the sync action we need to update the version in both steps.


As an exercise, you can try to have different builds for each environment. Maybe the staging version of your app communicates with a mock server while the production version communicates with the real server.


To test the newly created workflow, we merged a pull request into the develop branch. You can observe the workflow skip the production deployment as we did not push code to the master branch: 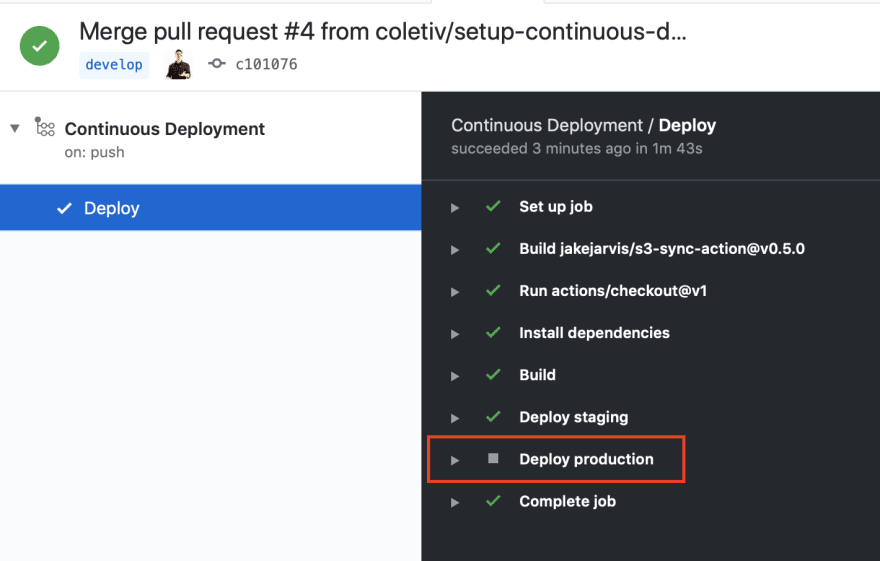 GitHub actions also provide an easy way to integrate the workflow status in your readme with badges. The syntax is as follows https://github.com/<OWNER>/<REPOSITORY>/workflows/<WORKFLOW_NAME>/badge.svg. In our case:

Which results in the following screenshot when you visit the GitHub project:

To fix this you would need a workflow for each branch which would allow you to have a separate set of badges per each environment.

We opted to have a single set of badges to avoid workflow duplication and in any case if a workflow fails you get an email informing you.

The companion repository of this article is fully functional so feel free to do a pull request and see the actions being triggered on the actions tab.

If the pull request gets approved and merged, the continuous deployment action starts and you will be able to see your changes on the respective environment (staging / production).

GitHub actions are a serious contender to the CI / CD scene, especially due to the community of developers Github has which quickly led to the development of so many open-source actions that you can cherry-pick and use on your actions.


So far the only complaint we have is the difficulty to define env variables conditionally, as seen in step 4, which led us to duplicate a big part of the workflow. Also, we couldn’t find a way to cancel a running job triggered by a pull request that got updated, it doesn’t make much sense to continue the action if the branch just got updated, we are just wasting resources.

Other than that we haven’t found anything that actions couldn’t do that we do on other CI/ CD tools (e.g. CircleCI) and vice-versa, so the choice of tool might come down to a matter of taste or bet in which platform will evolve better.


In our case, we like the fact that we have everything in a single place and we don’t need to jump between sites to check why a certain job has failed. On the downside, you might be locking yourself down even more to a platform, which can cause you problems if you decide to change to another code hosting platform down the line.

Awesome header design you have never seen it before

Explicit ESM in Node.js with .mjs