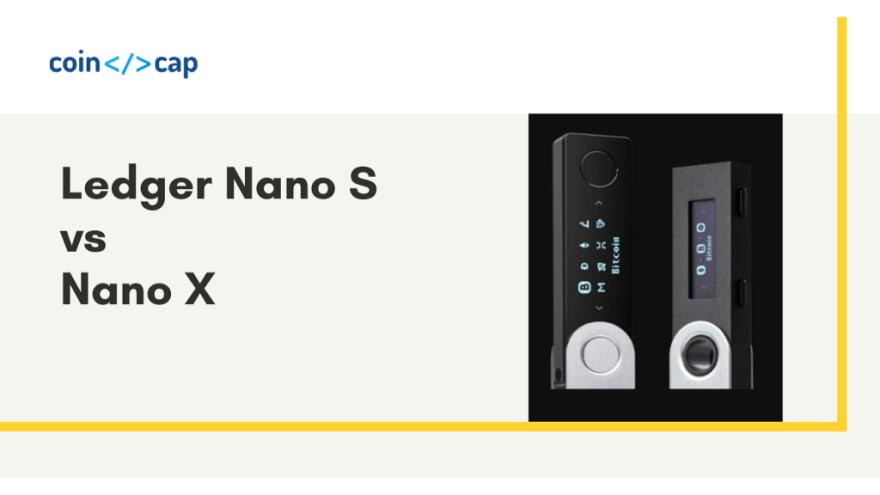 Hardware wallets are physical devices to store cryptocurrencies. They contain private keys in an offline mode and can neither connect to the internet nor run complicated apps. Hence are considered safe from attacks.

While comparing various hardware wallets of superior quality, Ledger certainly gets the upper hand. It is one of the largest hardware wallet manufacturers in the world. Ledger was founded in 2014. The company, which has sold more than 2 million devices, is now the leading choice of users when it comes to the safety of their funds.

Ledger Nano S vs X: In the Box

Ledger Nano S was released in June 2016. When you opt for ledger Nano S, it comes with -

It offers its users a 14-day free return policy. 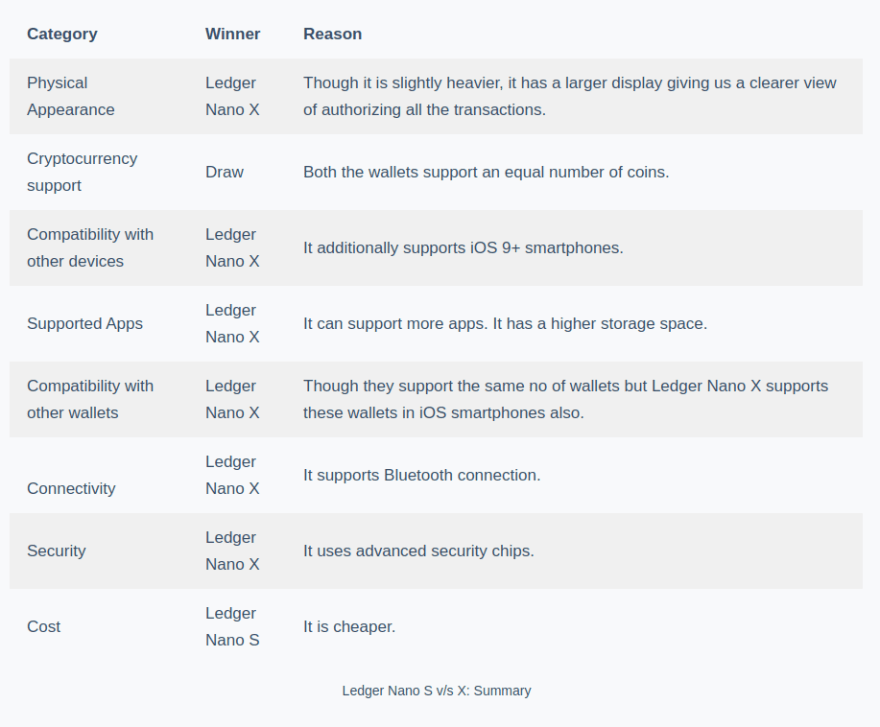 Depending upon the screen sizes, you will be able to view all transactions that are being sent or the address where you wish to receive the funds.

The larger the screen size, the better. It also makes it easier for users to navigate through the apps.

They both have a similar design. The material used is brushed stainless steel and plastic. It makes the Ledger wallet more durable and portable along with giving it a stylish look.

Ledger Nano S has two buttons to navigate at the top of the device whereas ledger Nano X has two front-facing buttons placed at both sides of the screen. It is easier to use as it is similar to using smartphones. If you long-press both the buttons you can directly go back to the home screen for Ledger Nano X. For Nano S you need to navigate to settings, then down to quit, and then double click to go back to the home screen.

Ledger wallets support 1000+ coins. It supports all ERC20 tokens on the Ethereum network. The popular ones being Bitcoin, Ethereum, Ripple, Polkadot, EOS, Litecoin, and many more.

Ledger Nano S vs X: Compatibility with other devices

Ledger is compatible both with computers and smartphones . It supports Windows 8+, macOS 10.10+, Linux excluding ARM Processors. Along with this, Ledger is also compatible with Android 7+ smartphones.

If you are using Ledger Nano S and want to use more apps, you can uninstall them after setting it up. The private keys will still remain secure in your device. Whenever you need those apps, you can reinstall them. This will help you save extra storage capacity.

Compatibility with other wallets

Ledger Live app can manage 27 assets and ERC20 tokens from your desktop and mobile.

They are compatible with 50+ apps.

For the user to be able to utilize the Secure Element’s unique and exceptional security capabilities along with being able to manage the varied peripheral devices, the Secure Element has been provided with an STM32 microcontroller (MCU) which acts as a router between the peripherals and the Secure Element and sends it a notification whenever new data is about to be received.

Hardware wallets have to connect to an internet-enabled device to complete the transaction.

Only certain transaction-related data can pass through the wallet to the internet-enabled device, thus making it secure from any attacks. You can connect to the Ledger Live App available both on desktop and smartphones.

Ledger Nano X can be connected through USB cable as well as Bluetooth. It uses USB Type-C. It can connect through Bluetooth to smartphones and tablets by using the Ledger Live Mobile Application. Ledger Nano X ensures that even if the Bluetooth is compromised, the attacker won’t be able to get hold of the user’s private keys.

Ledger Nano S does not require a battery.

Ledger Nano X has a battery of 100 mAh. It can be charged by connecting a USB cable to a PC or a laptop. When the device is in continuous use, it offers a battery life of 8 hours. On the other hand, if kept idle, the battery life extends up to 3 months.

Since Ledger Nano X can also be used without a cable, one should consider the battery life.

When you boot your device for the first time, it helps you set a pin code. You can select the pin by toggling between the two buttons. Then you may confirm by pressing both the buttons simultaneously. By using this, only those who know the pin can access the device.

Then during the initialization of your device, you will receive a 24-word seed phrase. Whenever your device is lost or stolen, you can recover all your funds using this. The seed phrase is only visible in the hardware wallets screen. Therefore, the seed phrase must be stored offline and in a secure place.

Ledger uses a trusted computing base which is validated using cryptographic proofs. Users can verify the integrity of the device by performing an attestation check. They also prevent evil maid attacks.

These prices are excluding the VAT.

According to the information and comparisons stated above, it is now quite unambiguous that if you’re looking for a high budgeted secured hardware device, then Ledger Nano X steals the show. But on the other hand, if you’re willing to opt for a budget-friendly one, then Ledger Nano S can do the needful.

Originally published at https://blog.coincodecap.com on October 26, 2020.