The other day, I watched Season Two of The Umbrella Academy (have you watched it? It's good!), and it got me thinking about the 1960s. Now I have to mention that I was not born yet in the 1960s - heck, neither were my parents - but do you know what was born in the 1960s? HIPPIES! HIPPIES! HIPPIES! ☮✌❤

Now, how do I incorporate my newfound awareness of Hippies into my React journey? Well, a whack-a-mole game has been on my list of React projects to attempt, and when I thought about the code logic I realized that I could transform it into Whack-A-Hippie!

Okay okay, so we won't actually be able to whack a hippie as we would in the traditional mole one, but we will be able to turn off the tv when one pops up to "Stop The Hippie Propaganda" for thirty whole seconds, easy enough right?

For this game to work, we will use these libraries:

Redux allows us to manage our app's state in a single place and keep the changes in our app more predictable and traceable.

I would suggest that you have a look at this tutorial if you are not familiar with Redux or if you would like to brush up on some of its core concepts.

By default, React (JavaScript) objects or values are mutable, meaning they can be changed whenever a new update to a function occurs or a state is changed. Here comes our problem! For this app, we need to make use of immutability since we will need to return immutable (unchanged) states of our game array after each round.

To achieve this, we will make use of the seamless-immutable library, but you could also opt for Immutable.js if you want to work with an API. The two are at its core quite indifferent, but depending on the scope of your React project, you will need to look at the pros and cons of each to make a well informed decision.

Lodash is a JavaScript library which provides utility functions for common programming tasks, such as simplifying strings, numbers, arrays, functions and objects. Whenever you see _. know that we are using lodash on our arrays and collections, and honestly, I wish that I could go into greater detail on this library but my explanation would do it extremely cruel injustice! Their documentation is the right place to start.

Now, I would like to suggest that you code along with me because it is best to type in the code yourself than to copy it because it builds up that muscle memory. When you're ready, let's get started - future React Redux Master! 😉

All explanations for the project are in the code itself via the comments, but if you get stuck or want to download my CSS file, fonts or even images, check it out on my GitHub Repository.

Want to test it before you make it? Test it out on Heroku.

To complete this project as I did, you will need to do the following in your preferred command line at a comfortable location on your computer:

Now you can go ahead and open up your newly created project in your favorite code editor. I use Visual Studio Code, which isn't worth mentioning at all really, but I just wanted to announce it into the void! 🧠

Now that we are in our project folder, it is time to set up our project frame. Before we start, head over to your index.html file and add your FontAwesome CDN so that we can use an icon later on (you can remove the icon completely if you want). I add the CDN to my project instead of installing it via npm because I've ran into some issues in the past, so it's just easier for the type of project that we are making.

In your ./src folder, modify it to meet the following file structure:

Our Reducer file will contain all functions that take the current state and an action as arguments, and return a new state result. In other words, (state, action) => newState. For this project, we will make use of reducer functions that can handle updating our game states. It is important to not make any mistakes in this file because our store.js will be directly dependent on it!

➡ If you want to learn more about Redux Reducers, check this out!

In your reducer.js file, make the following changes:

Now that we have created our reducer, our store can call from it. Our Redux store, in basic terms, will bind together all our reducer state functions that we created in the previous step to compile our app functionality.

➡ If you want to learn more about the Store, check this out!

In your store.js file, make the following changes:

With our store created, we will need to modify our index.js file so that we can make use of the store components when the game loads. Do not test out your application at this stage, because it will crash! 🤖

With our Redux Store complete, we can now turn our focus to our game components in our ./components folder. Let's start with our Status.js file. This components file will contain our game status outputs as our game state changes.

The status for our changing game states would be as follows:

In your Status.js file, make the following changes:

In the end, this is what we want to achieve:

Now we need to create our hippies and the screens where the hippies will hide behind and pop out on! We also need to add functions that will be able to change the state of these components so that we can hit the hippie, and make the hippies appear/hide on the screen!

Please Note that we will make use of a CSS animation to have the hippies 'pop-out' on the screen, but as a challenge, you could try and replace this with a React Animation

Get your Hippie and TV image ready, because we will need them to make the following changes in our Hippie.js file:

This file should be able to render something like this:

This is our second last step to completing our game. Our main "gameboard" will be rendered here, and our hippies that we created in the previous step will be put to use.

Make the following changes in our Game.js file:

This file should be able to render something like this: 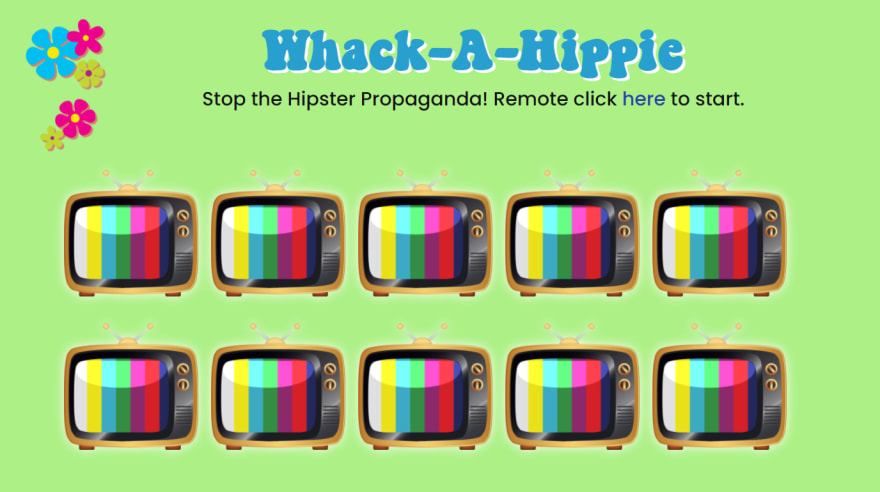 To tie it all together (and to make our previous changes to our index.js file work) we will now import our Game and our Status components to our main App component. 😊

Make the following changes in our App.js file:

Now that we have created all the components and our Redux Store, and added the necessary CSS styling, it is time to test our application. I do this frequently during project creation to test my code, but during this tutorial we only test it at the end - however you want to do it, is up to you! Run your project with the following command:

You should get something similar to this: 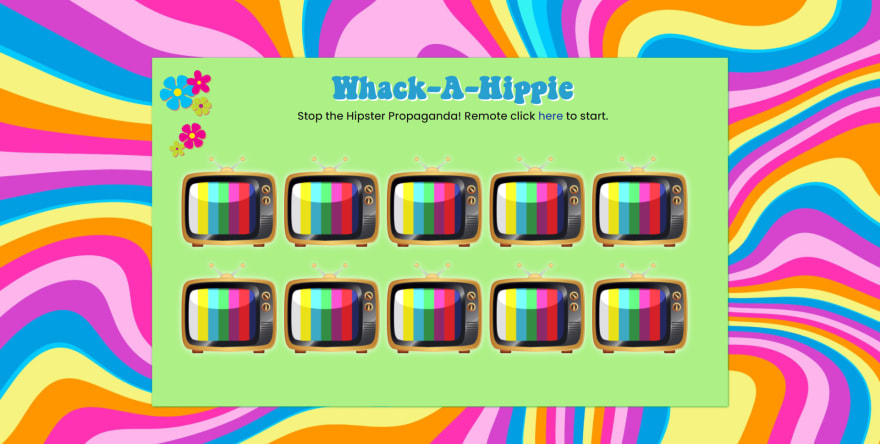 Good job for reaching the end of this tutorial. When you're done, deploy your new project to GitHub and take a well-deserved break. Did you learn something new? What would you do different? Did you use something other than hippies? Let me know in the comments down below!😊