Part 3 of An IoT Odyssey

Consumer Bluetooth devices that most of us are familiar with such as Bluetooth speakers, headsets, hands-free kit are considered Bluetooth Classic devices. These tends to either be externally powered or battery powered but with short shift life.

Bluetooth devices such as wearable, smart IoT, fitness monitoring devices are considered Bluetooth Low Energy devices. These tends to be battery powered with long shift life (we are talking about months, even years).

Bluetooth Low Energy was formerly known as Wibree, a technology developed by Nokia and it's partners. In 2010, Bluetooth SIG merged with Wibree and renamed it Bluetooth LE. In the same year Bluetooth 4.0 was released and include both Bluetooth Classic and Bluetooth LE.

Note that while Bluetooth 4.0 (and later versions) supports both Bluetooth technology, they are not compatible. This means two devices communicating via Bluetooth must use the same technology (either Bluetooth Classic or Bluetooth LE).

The GAP service determines the device's visibility to the outside world as well as the role of the device in a Bluetooth network.

The GAP service defined 2 modes that a device can be in:

The GAP service also defined 4 roles that a device can act as:

How a device behave depends on the mode it is in and the role it is acting as. Take the smart bulb and smart phone for example. Given the scenario where the bulb is not connected to the phone, both the bulb and the phone will be in advertising/discovery mode. The bulb will act as the Peripheral and the phone will act as the Central. The bulb will be broadcasting advertising packets with a connectable flag so that on receipt of the advertisement packets, the phone can initiate a persistent connection with the bulb.

I think in order for us to understand how GATT and therefore Bluetooth LE works, it is important to explore a little bit about the GATT Server and the GATT Client.

Basically, a GATT Server contains a table of attributes which it exposes to the GATT Client to access (read/update).

The communication between a GATT Client and GATT Server can be summarised as follow:

Each record in the table represent an attribute (a property associated with the GATT Server) and has the following structure: 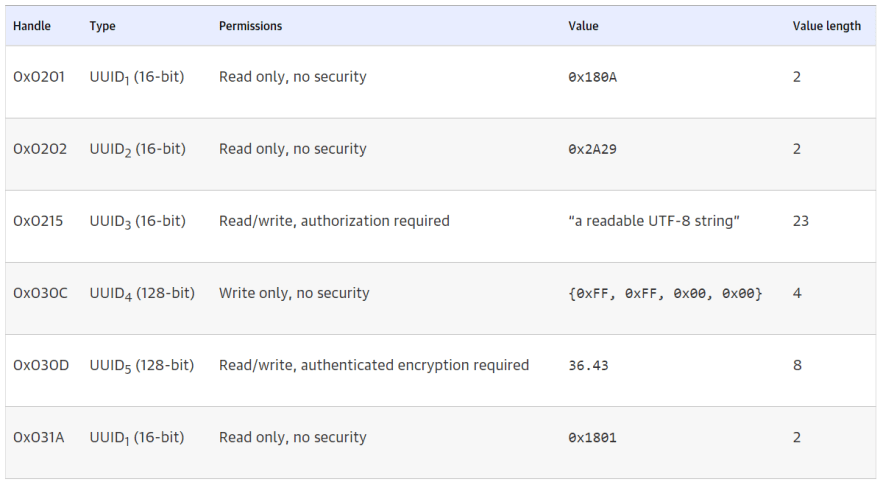 Now that we have a better understanding of how data are stored on the GATT Server, let's explore GATT in details.

GATT allows the table of attributes which we have just discussed previously to be organised in a well defined hierarchical data structure.

Gitting happier with a global .gitignore

A reusable dark mode with Reactjs and pure CSS