Often in machine learning, and specifically with classification problems, we encounter imbalanced datasets. This typically refers to an issue where the classes are not represented equally, which can cause huge problems for some algorithms.

In this article, we’ll explore a technique called resampling, which is used to reduce this effect on our machine learning algorithms.

This article presumes that you know some machine learning concepts and are familiar with Python and its data science libraries.

What is an Imbalanced Dataset?

The best way to learn something is through an example:

Most classification datasets don’t have exactly equal numbers of records in each class, but a small difference doesn’t matter as much.

In addition to using the core Python libraries like NumPy, Pandas, and scikit-learn, we’re going to use another great library called imbalanced-learn, which is a part of scikit-learn-contrib projects.
imbalanced-learn provides more advanced methods to handle imbalanced datasets like SMOTE and Tomek Links.
Here are the commands to install it via pip or conda:

Most beginners struggle when dealing with imbalanced datasets for the first time. They tend to use accuracy as a metric to evaluate their machine learning models. This intuitively makes sense, as classification accuracy is often the first measure we use when evaluating such models.

Nevertheless, this can be misleading, because most of the algorithms we use are designed to achieve the best accuracy, so the classifier always “predicts” the most common class without performing any features analysis. It will still have a high accuracy rate, but it will give false predictions, nevertheless.

But on the other hand, the algorithm doesn’t perform any learning — the accuracy here is only reflecting the underlying class distribution because models look at the data and cleverly decide that the best thing to do is to always predict spam and achieve high accuracy. As such, the model’s success and is just an illusion.

This is why the choice of metrics used when working with imbalanced datasets is extremely important.

You should have an imbalanced dataset to apply the methods described here— you can get started with this dataset from Kaggle.

You can use Seaborn to plot the count of each class to see if your dataset presents imbalanced dataset problem like the following:

Or you can use the sklearn to compute class weight and get the class ratios as follows:

There are multiple ways to handle the issue of imbalanced datasets. The techniques we’re going to use in this tutorials is called resampling.

Resampling is a widely-adopted technique for dealing with imbalanced datasets, and it is often very easy to implement, fast to run, and an excellent starting point.

Resampling changes the dataset into a more balanced one by adding instances to the minority class or deleting ones from the majority class, that way we build better machine learning models.

The way to introduce these changes in a given dataset is achieved via two main methods: Oversampling and Undersampling. 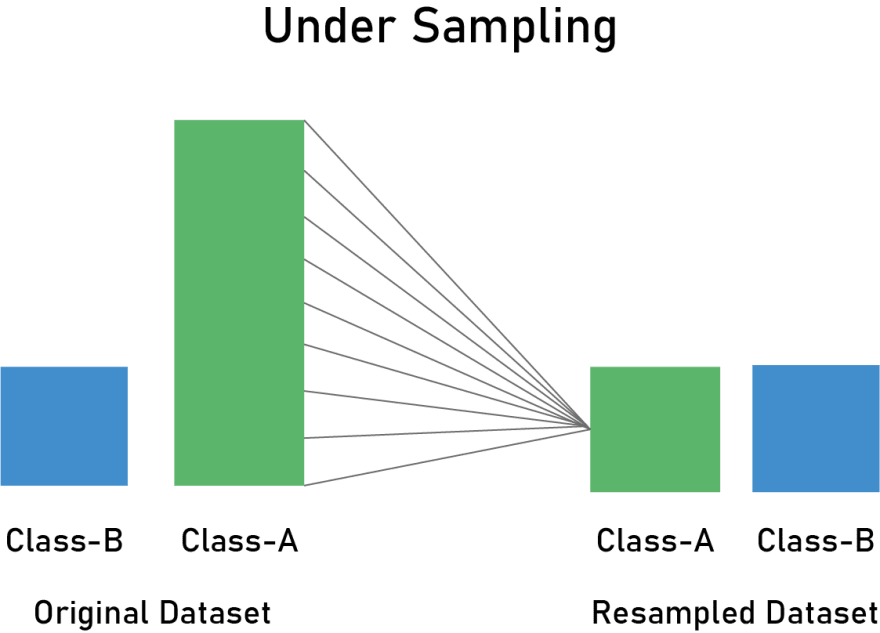 Notwithstanding the advantage of balancing classes, these techniques also have some drawbacks:

We’ll now show the underlying techniques in each method, along with some code snippets.

Random undersampling randomly deletes records from the majority class. You should consider trying this technique when you have a lot of data.

A simple undersampling technique is to undersample the majority class randomly and uniformly. This can potentially lead to information loss, though. But if the examples of the majority class are near to others in terms of distance, this method might yield good results.

Here’s the set of parameters you can specify to the RandomUnderSampler object (the same thing apply for the other objects from the imblearn library):

The NearMiss algorithm has been proposed to solve the issue of potential information loss. It’s based on the nearest neighbor algorithm and has a lot of variations that we’ll see in this section.

The basics of the NearMiss algorithms include the following:

Here are the different versions of this algorithm:

You can tune also the following parameters:

Tomek links are pairs of very close instances that belong to different classes. They’re samples near the borderline between classes. By removing the examples of the majority class of each pair, we increase the space between the two classes and move toward balancing the dataset by deleting those points.

Here is a code snippet to resample the majority class:

The idea here is basically to remove the unimportant instance from the majority class. To decide whether an instance is important or not, we use the concept of clustering on the geometry of the feature space.

Clustering is an unsupervised learning approach, in which clusters are creating encircling data points belonging.

We will use it only to find cluster centroid that are obtained by averaging feature vector for all the features over the data points.

After finding the cluster centroid of the majority class, we decide the following:

Here is a code snippet for using cluster centroids:

Besides the previous parameter, here’s another one you can tune to get better results:

Edited Nearest Neighbor Rule (or ENN) was proposed in 1972 to remove instances from the majority class (undersampling).

This technique removes any instance from the majority class whose class label is different from the class label of at least two of its three nearest neighbors. In general terms, it’s near or around the borderline of different classes.

Neighborhood Cleaning Rule ( or NCR) deals with the majority and minority samples separately when sampling the datasets.

NCR starts by calculating the nearest three neighbors for all instances in the training set. We then do the following:

An important parameter here is threshold_clearning, which is a float number used after applying ENN, it tells the algorithm to consider a class or not during the cleaning.

Random oversampling randomly duplicate records from the minority class. Try this technique when you don’t have a lot of data.

SMOTE stands for Synthetic Minority Oversampling Technique — it consists of creating or synthesizing elements or samples from the minority class rather than creating copies based on those that exist already. This is used to avoid model overfitting.

To create a synthetic instance, SMOTE finds the K-nearest neighbors of each minority instance, randomly selects one of them and then calculates linear interpolations to produce a new minority instance in the neighborhood. It can be also explained by changing this instance features one at a time by a random amount — so as a result, the new points are added between the neighbors.

Here is a code snippet showing how to resample the minority class:

ADASYN stands for Adaptive Synthetic sampling, and as SMOTE does, ADASYN generates samples of the minority class. But here, because of their density distributions, this technique receives wide attention.

It measures the K-nearest neighbors for all minority instances, then calculates the class ratio of the minority and majority instances to create new samples.

Repeating this process, we will adaptively shift the decision boundary to focus on those samples that are hard to learn.

We can combine oversampling and undersampling techniques to get better sampling results. Here are two ways that imblearn provides:

Besides the resampling methodologies we’ve covered in this article, there are other intuitive and advanced techniques you can employ to deal with this problem. Here are some of them:

There are more resources out there to handle your imbalanced dataset. Here are a few to help you get started:

In this article, we confronted the problem of imbalanced datasets by exploring several different resampling techniques, which allow you to change your dataset’s balance so your model can learn more effectively.

You’ll need to experiment with these techniques on your specific machine learning problem to see what best fits your case — we don’t have a technique that always allows us to build a better model while achieving the best performance. Otherwise, we wouldn’t be able to say that we’re machine learning engineers.

You can combine these methods to obtain more reliable models, but I suggest starting small and building upon what you learn.

Time series analysis of Bitcoin price in Python with fbprophet ?!

Julia: A Programming Language for Data and Computer Analytics