It’s a compiler that automatically generates the equivalent of useMemo and useCallback calls to minimize the cost of re-rendering, while retaining React’s programming model.

Recently, React core Team finished a rewrite of the compiler to make it more reliable and capable after an early preview of React Forget at React Conf 2021. This new architecture allows us to analyze and memoize more complex patterns such as the use of local mutations, and opens up many new compile-time optimization opportunities beyond just being on par with memoization hooks. 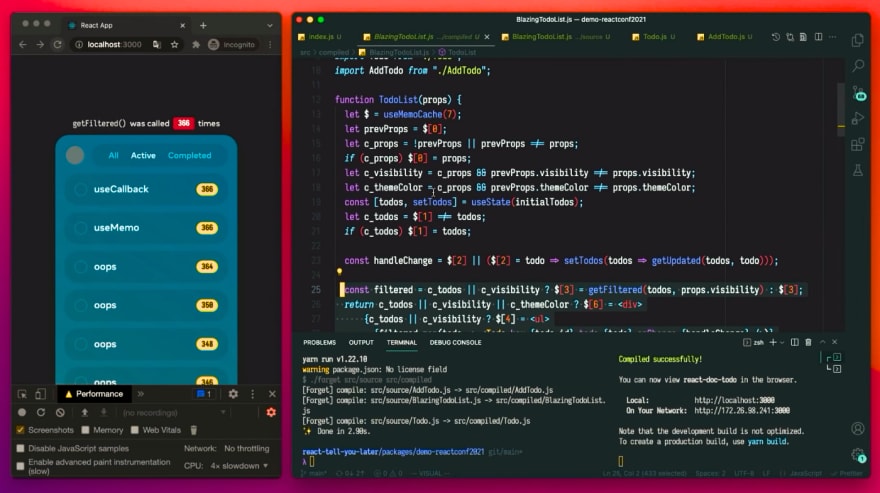 According to Dan Abramov, this could eliminate the need to use React.memo() as well. This is because the compiler apparently memoizes not just the calculation of useMemo() results, but also the resulting React element objects returned by the component.

Watch the original video as it showcases a more in-depth and hands-on experience of using React Forget.

Once suspended, chandramarch18 will not be able to comment or publish posts until their suspension is removed.

Once unsuspended, chandramarch18 will be able to comment and publish posts again.

Once unpublished, all posts by chandramarch18 will become hidden and only accessible to themselves.

If chandramarch18 is not suspended, they can still re-publish their posts from their dashboard.

Once unpublished, this post will become invisible to the public and only accessible to chandra-penugonda.

Thanks for keeping DEV Community 👩‍💻👨‍💻 safe. Here is what you can do to flag chandramarch18:

Unflagging chandramarch18 will restore default visibility to their posts.