The main principle of Service-Oriented Architecture is to segregate the concerns to move the business logic and the vulnerable data layer off to the API routes directly. In this, we isolate different parts of the logic in such a way that makes sense.

In this three layer or tier system we usually divide the logic of a route or a function of the application into Controller, Service, and Data Access Layer. 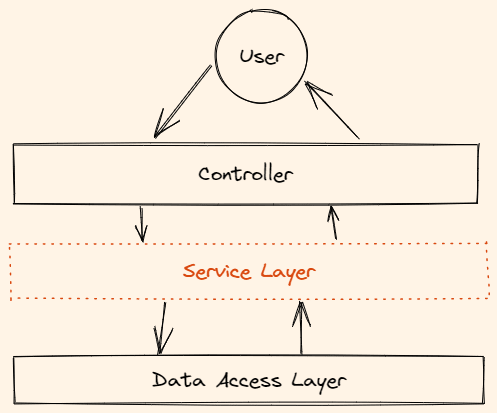 It's also responsible to return the processed or requested data to the user in a suitable format. Generally, the routing mechanism controls which request hits which controller.

This is where the actual logic of the application resides, it contains our CRUD operations, validations, authentication and authorization of users and data. This is the business logic layer where the data from the user is processed that the service gets from the controller and the data access layer is summoned the return data to the user.

A major advantage of splitting our business logic like this is that our codebase becomes a lot more maintainable, and we write clean code and tend to make a lot less make mistakes.

The service layer is the actual heart or core of our application it contains all the magic of the application, for example the application generates invoices from the user’s data, this is where the invoice will be generated, and the data will be persisted, and a response will be sent to the user via the controller.

It's the layer where the logic related to our data persisted in some sort of database is modified, read, and deleted. It doesn’t really have a rigid structure like the other two. And what I mean by structure is that the controllers and the services are put into different files, but this is actually some sort of ORM like prisma or mongoose which **can talk to the persisted data.

The most common question in your mind would be that why should I use this, and not put all the logic inside a single function or layer so to say. I know that I have persisted that it makes the codebase more manageable, but that isn’t such a solid reason to do so, for like small projects with less logic and fewer routes.

To convince you into using this approach, here are some advantages to this 3-tier-architecture:

Is it that good?

The Service-Oriented Architecture is not the best fit for all sorts of use cases, in some cases it might be a disaster to adopt this.

One of the major disadvantages of it is its high overhead, and high starting cost.

Should I adopt it?

The big question is, should I actually adopt this highly boilerplate rich, secure and complex architecture? This question can’t be answered with just this. You have to make this decision yourself based on your requirements, project size, budget and time.

If you’re creating a minuscule application that just have few routes and some logic, you shouldn’t adopt this, since it will become a pain to maintain it for such tiny project.

But, If you wish to create a highly complex large project with a lots or routes and tons of logic, it may be a good fit for you.

Either way, you’ve to decide this yourself. There are some really nice frameworks out there that make starting with it much easier, like NestJS and Spring Boot for APIs and Backend Stuff and AngularJS for Client Side.

Once suspended, celeron will not be able to comment or publish posts until their suspension is removed.

Once unsuspended, celeron will be able to comment and publish posts again.

Once unpublished, all posts by celeron will become hidden and only accessible to themselves.

If celeron is not suspended, they can still re-publish their posts from their dashboard.

Once unpublished, this post will become invisible to the public and only accessible to Khushal Bhardwaj.

Thanks for keeping DEV Community 👩‍💻👨‍💻 safe. Here is what you can do to flag celeron:

Unflagging celeron will restore default visibility to their posts.