Autumn is officially back, and with it another portion of fresh cloud technology news.

This series brings you up to speed with the latest releases, acquisitions, research, and hidden gems in the world of cloud computing – the stuff actually worth reading.

Here’s what happened in the cloud world this August.

Story of the month: Do most SaaS cloud cost tools really suck?

It makes sense for industry players to be skeptical about cloud cost optimization tools. It’s true that many solutions on the market are pretty complicated and steal away a great deal of time for onboarding and training.

But allocating, analyzing, and forecasting cloud costs is time-consuming as well. You have to research pricing plans, make infrastructure changes, create new instances, and do all the other things that get you optimal performance at the lowest possible cost.

Don't buy into the hype that cloud optimization begins and ends with chargeback/showback. It doesn't. You need real, quality scaling and automation. Passing a bill around to different teams just shifts blame, not solutions.

But there is a way to solve this problem.

But only cloud-native cost optimization can solve it all. A solution like that gives you full control over what happens but doesn't force you to take any action to save costs. It all happens automatically. 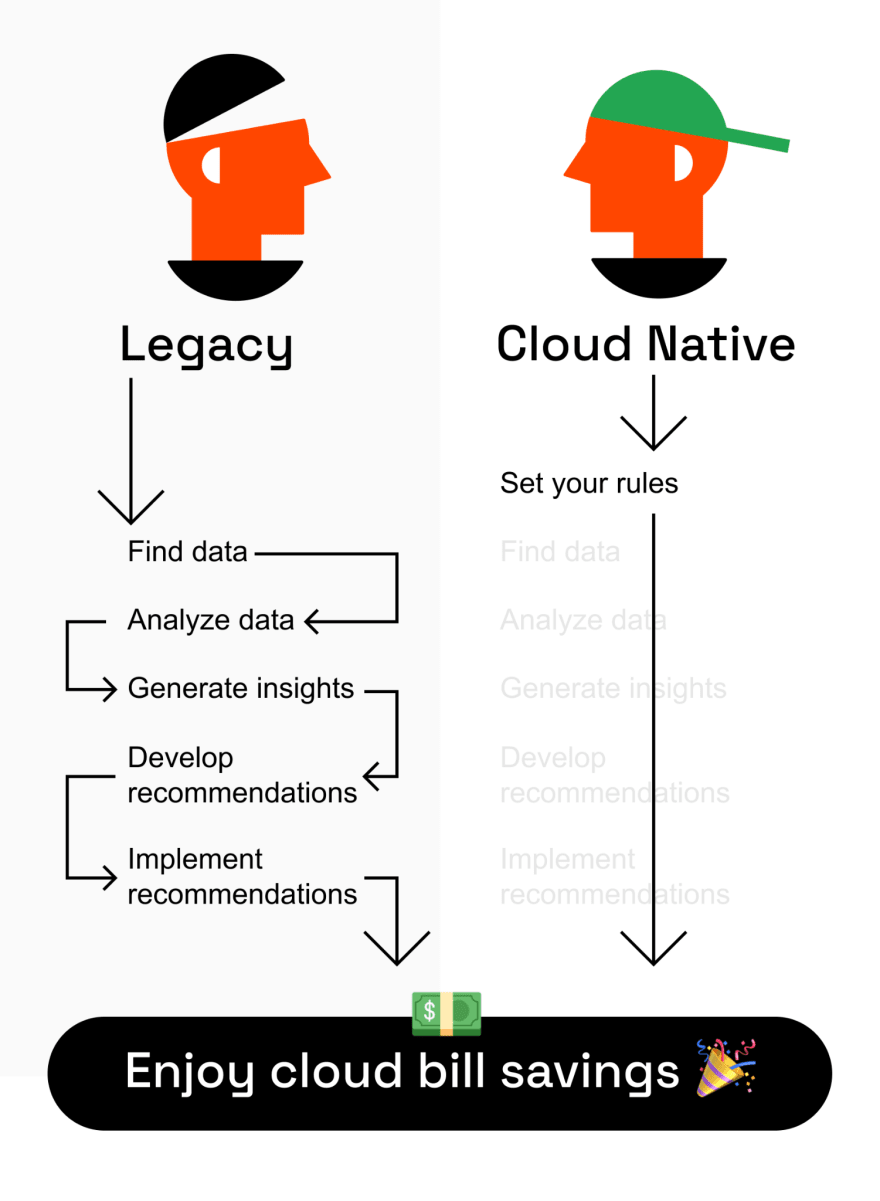 Automated cost optimization platforms like CAST AI do all this to get you where you want to be:

Most importantly, the best solutions apply all of this in real time, helping teams to master the point-in-time nature of cloud optimization.

Automated optimization brings results instantly and guarantees a certain level of savings. At the same time, it’s not a black box and you retain full control over its workings.

The Business of Cloud

Google Cloud has done more than any other company for developing the cloud-native ecosystem, but it still struggles to compete with the enterprise cloud toolkits that are AWS and Microsoft Azure. Despite the efforts of Google Cloud’s CEO Thomas Kurian, the vendor still holds only 10% of the cloud market.

While enterprises like 20th Century Fox and American Eagle use the service for advanced AI and machine learning, few companies out there decided to go all-in with Google Cloud - some notable exceptions are Deutsche Bank and Sabre, which both signed a 10-year deal with Google Cloud in 2020. How is Google going to close this gap? Let’s keep an eye on the vendor in the next few months.

Meanwhile, IBM got its hands on several hybrid cloud deals with Africa’s largest banks, including the South African Nedbank and Morocco’s Attijariwafa Bank. This is part of the company’s broader strategy to pivot towards the growing market of storing large volumes of data on the internet.

Speaking of storage, the cloud storage company OVH Groupe SAS kicked off its IPO in Paris and expects to raise at least $469 million. OVH will use the funding to build its competitive advantage against AWS and speed up international expansion, successfully recovering from the blow that was one of its data centers catching fire back in March.

Bain’s 2021 Technology Report is out and has some interesting findings of how the cloud technology and platform business models are now unlocking value for businesses across every sector. And cloud-native infrastructure software vendors are a big winner here - by 2020, the publicly traded companies in this niche were worth nearly half a trillion dollars.

Many of the leading companies more than doubled their market value last year, followed by a healthy pipeline of earlier-stage competitors valued at more than $1 billion each. Take the cloud identity provider Okta as an example here - it’s doing really well and reported the second quarter’s results that beat its expectations.

Microsoft is having one hell of a ride this year when it comes to security. Naturally, Microsoft isn't the only tech giant having vulnerability issues today. But in 2021, the company released a patch for at least one zero-day vulnerability each month except for May. The vulnerabilities were found across Microsoft’s operating systems, platforms, and applications that may expose their customers to risk. Consider that attacks like SolarWinds, Colonial Pipeline, and HAFNIUM happened mostly due to Microsoft vulnerabilities.

And by the end of August, the “worst cloud vulnerability you can imagine” was discovered in Microsoft Azure, impacting some 30% of Cosmos DB customers. Apparently, Cosmos DB gave read/write access for every database in the service to attackers who exploited the bug. This vulnerability was part of the system for “at least several months, possibly years.”

The AWS Tokyo outage can be a lesson for everyone. The outage happened because of a problem with multiple core network devices that were used to connect network traffic utilizing Direct Connect to all the Availability Zones within the AP-Northeast-1 region.

The former Head of Open Source Strategy at AWS, Matt Asay, published an article immediately after leaving the company to tell us all what we don’t know about working with AWS. A fascinating glimpse into the cloud mogul’s inner workings that helps to understand the company values and what makes Amazon employees tick.

And here are some new product features hot off the press:

Pitch Your Idea for the Secret Ingredient Challenge at AWS re:Invent!

How to create NFTs in different blockchain networks?