This introduction post will show and briefly describe the available options for software testing using C# in Visual Studio (VS) 2019 Enterprise 16.3.9.

As of this post there are 6 distinct test projects within Visual Studio 2019:

A Unit Test is when a segment is tested on a program, within a class unit tests usually tests a single method. The MS Test Project

Within the visual studio test projects, the use of assertions is the most common form of validating an expected value of a unit test. The following code shows an example of some of the assertion methods within the testing tool framework.

It is also possible to implement data driven test in the following code we have a test, one test that will fail for the "p1" and "p2" data but pass for the "p3".

The test explorer within Visual Studio assists the user on running, grouping, filtering, create, save, debug etc. The path to this feature is in

Test -> Test Explorer, as shown in the figure below or using the (crtl + e, t) shortcut.

It's also possible to create playlists of selected tests for a subset of unit test that can be arranged in groups of categories. To create a playlist, you can select multiple tests in the test explorer, right click the selected test and click on add to playlist.

A playlist can be saved to a external file with the extension (*.playlist), after saved you can remove and add new methods to the playlist, to run a saved playlist open test explorer and click on the open playlist icon as shown on the figure below.

To get started with code coverage first open the Test Explorer, within test explorer select 1 or more tests then right click the tests and select analyze code coverage, the code coverage results should pop-up with information on which projects has been tested and the covered blocks percentage of the given projects. 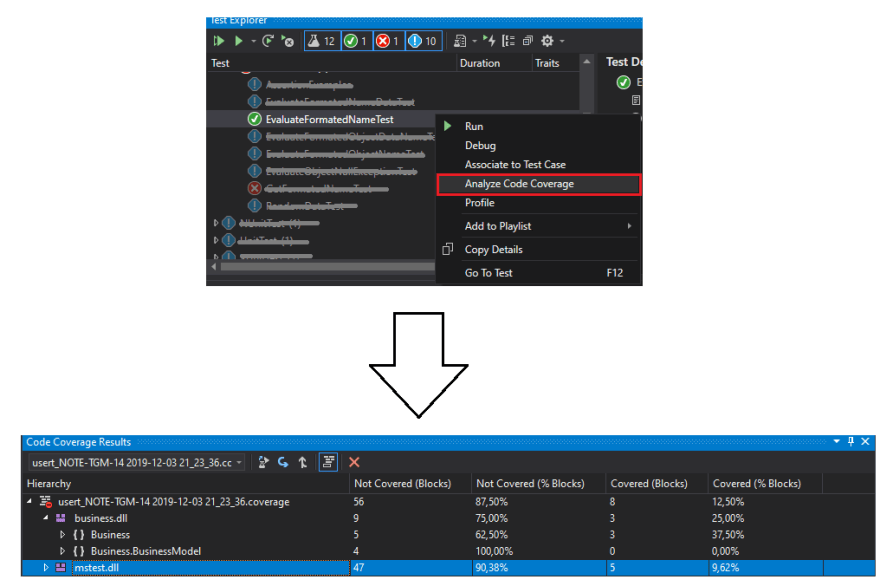 Live Unit Testing is also only available in Visual Studio Enterprise Edition, this feature provides information about code coverage in real-time. If the developer updates a code block the live unit testing feature can detect these changes and display test information, in real time.

As shown in the figure bellow live unit testing provides information, next to each method we can view icons describing if the method has failed or passed.

MSTest, NUnit and xUnit are all efficient for creating unit tests in the Visual Studio environment. You can create Test Methods, work with data driven tests and use Test explorer with all these frameworks. Within Visual Studio tools it is possible to create Playlist analyze Code Coverage and perform Live Unit Testing.