Mozilla has released the latest version of the Firefox browser, Firefox 70 and it came with a lot of powerful features that extend the level of control we have on the browser. In this post, we’ll look at all the new features and demonstrate how they help increase our browsing experience.

The new release of Firefox comes with a feature called “Social Tracking Protection.” It blocks cross-site tracking cookies from websites such as FACEBOOK, Twitter, or LinkedIn to put you in control of your digital footprint and increase safety.

This feature is packed into a collection of other features that protect your privacy when you browse, nicely named “Enhanced Tracking Protection.” Some previously existing features under this category protect you from social media trackers and crypto miners.

Sometimes, your private data might be exposed in online data breaches and in such cases, you might want to invalidate that private data so that hackers cannot take advantage of them. The question is, how can you do that if you don’t know what data was part of a breach?

Firefox Lockwise, starting in Firefox 70, introduces a new feature that shows you an alert of potentially vulnerable passwords so that you can update them and keep your privacy.

Firefox 70 comes with a new feature that enhances the security of passwords by helping you generate complex and secure passwords when you create a new online account. This new feature makes any HTML <input> element of type password have an option to generate a secure password in the context menu, which can then be stored in Firefox Lockwise.

Firefox was already pretty fast but with this new release, it’s even faster due to the improved JavaScript Baseline Interpreter.

This improvement was introduced primarily due to the ever-growing JavaScript codebases. Lots of codebases are now so large that a Baseline JIT compiler no longer complies just in time. With this new addition to the pipeline of executing JavaScript in the browser, lots of performance improvements have been made. This is not an entirely new feature, the Baseline Interpreter already existed in Firefox nightly edition, however, this time some performance improvements were made:

If you are curious about all the technical details about this, you should check out this blog post from Mozilla.

In this new release, some very helpful improvements have been made to the Firefox developer tools. Let’s take a look at them: 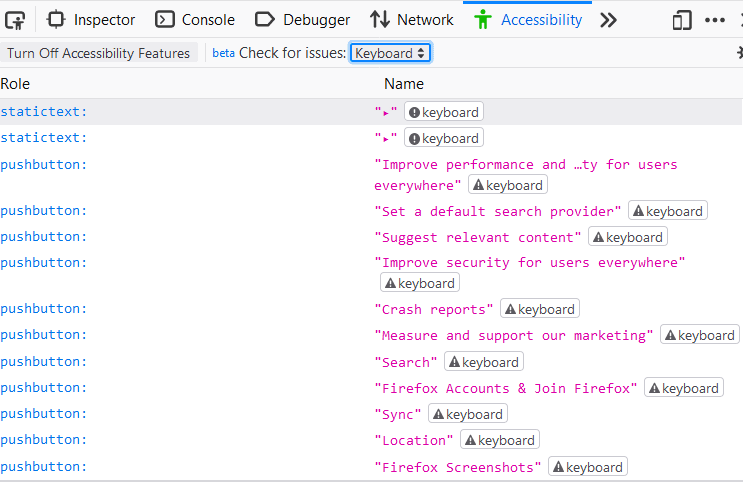 And the security fixes include a list of moderate, high, and critical bug fixes which you can read about in detail here.

In this new release, there are two new CSS features. Let’s look at them:

In the new update, you can use two keywords to express this rule like so:

On JavaScript, there are two major changes:

Secondly, two methods in the prototype chain of Intl.NumberFormat, format() and formatToParts() can now accept BigInt values as arguments.

In this article, we’ve covered the new updates that come with Firefox 70. This update really touched a lot of parts; HTML, CSS, JavaScript, devtools, performance, and more.

Some of the key highlights in this update include:

In order to test these features, you need to update your Firefox browser to the latest edition Firefox 70 and experience the new updates yourself.