The world of front-end development is fast-paced and can be pretty daunting to even the most experienced developers.

Each new framework, design system, and architecture pattern comes with rather bold claims about changing the future of how we’ll write code.

In this post, we’ll look at Rust — a language empowering everyone to build reliable and efficient software.

I know what you’re thinking: “I’ve heard this rhetoric before.”

You’re not wrong. Nevertheless, I can assure you that Rust lives up to the hype.

The goal of this article is to introduce you to Rust and explain why it’s useful.

As a front-end developer, you’ve probably mostly interacted with JavaScript as your primary language. Its dynamic, loosely-typed nature can make it a little difficult to quickly pick up other languages that doesn’t share these traits.

However, Rust was designed to make the learning curve of strict-typed languages less steep, meaning you won’t experience the typical frustration of learning languages like c++.

There are very minor similarities between Rust and JavaScript, such as the use of let and const for variable declarations.

This isn’t a huge deal, but I found that I felt more at ease using Rust since I was already familiar with these keywords.

Another benefit to Rust is that the syntax isn’t verbose — it’s very straightforward and clean.

By balancing powerful technical capacity and a great developer experience, Rust gives you the option to control low-level details (such as memory usage) without all the hassle traditionally associated with such control.”

Who is Rust for?

If you’re entirely new to programming, Rust probably isn’t for you.

The official documentation inclusive assumes you’ve written code in another programming language, but it doesn’t make any assumptions about which one.

If you’re usually concerned with memory-efficient code, Rust will be an especially good fit for you.

With Rust, anyone can do systems-level work traditionally reserved for the elite club of coders who have mastered the low-details of memory management, data representation, and concurrency.

Here are some exciting facts: Rust isn’t limited to low-level systems programming, and it’s expressive and ergonomic enough to make CLI apps, web servers, and many other kinds of fun piece of software you’re excited to build.

Setting up Rust is easy regardless of your operating system.

I don’t want to clutter this piece, so just head over to the installation guideline page and it will automatically detect your OS and walk you through the recommended setup for your machine.

Note : If you’re on a Linux or Mac, you should see something like in the image below:

For the purposes of this post, we’ll be using a UNIX-based system (All Linux distributions and Macs). Run the command below in your terminal and follow the onscreen instructions.

Note: If you are using a Windows subsystem for Linux, the command works for you too.

If you’re on a Windows machine, yours would look something like this:

for windows and windows subsystem for Linux

Setting up your development environment

In this article, we’ll use VS Code. 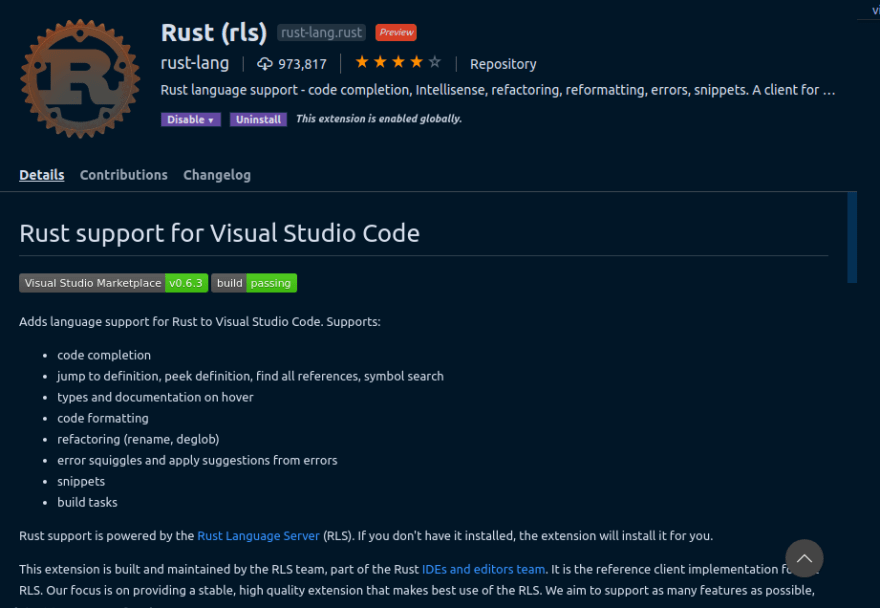 It’s worth noting that regardless of your code editor of choice, there are bound to be extensions or plugins for Rust. Check your editor’s extensions marketplace and you should see one.

Install it as instructed and you’re good to go.

Once you’ve gotten all that out of the way, run the following command to see if you’ve got Rust installed on your machine.

If all went well, you should see something like this:

If you’ve followed the installation properly but failed to run this command in your terminal, the most likely cause is that you didn’t configure the PATH environment variable properly.

Head over to the installation guide to see how you can sort that out.

Note: remember to restart your terminal after the installation procedure before you run this command.

You don’t need to scour the internet for books or resources to learn Rust.

With your installation comes a copy of the book “The Rust Programming Language” by Steve Klabnik and Carol Nichols, with contributions from the Rust community.

It walks you through setup, basics, and advanced topics with a hands-on approach. It’s a top-notch resource.

You can read the book online or use the command below for an offline copy. Be sure to install rustup on your machine if you didn’t do so during your initial Rust setup.

Alternatively, you can choose to do the rustlings course. It guides you through downloading and setting up the Rust tool chain, and teaches you the basics of reading and writing Rust syntax on the command line.

You can also check out Rust by Example if reading hundreds of pages about a language isn’t really your style.

While the book talks about code with a lot of words, RBE shows off a bunch of code, and keeps the talking to a minimum. It also includes fun exercises.

Interfacing Rust with the front-end

Having come this far, you’re probably wondering how you can get your hands dirty with Rust on the front-end.

Typically, to use Rust (or any other language aside from JavaScript) on the front-end, you need to use WebAssembly.

If you’re not already familiar with WebAssembly (wasm for short), it is a binary instruction format that promises near native performance, allowing developers to build applications with high level languages like rust , c++, or any language of your choice (other than JavaScript of course) on the web for client and server applications.

A key advantage here is that Rust is compiled down to machine code, so there is no virtual machine.

There also isn’t an interpreter sitting between your code and the machine, making it highly performant.

This comes as no surprise since Rust is a systems programming language.

Rust responds to requests nearly 100 times faster on average than Node, and you won’t run into the compile time errors that JavaScript apps are usually prone to.

Once you’re done with the setup for the standard Rust development tool chain, setting up for front-end dev is also easy.

First, you need to get wasm-pack installed. It’s a comprehensive package for building, testing, and publishing Rust-generated WebAssembly.

Run the command below in your terminal if you’re on a Mac or Linux distribution:

You can also install cargo-generate by using an existing git repository as a template. It helps you quickly get started with a new Rust project.

Install with this command:

This should work fine if you have the Rust tool-chain properly configured on your machine. Cargo is the package manager for Rust.

You also need to have npm installed. Follow these instructions to install npm.

If you already have npm installed, be sure you’re up to date. Do so with the following command:

Rust has a lot of advantages and uses:

Notice how it recommends a solution after pointing out the error. Super useful, don’t you think?

You can rest assured the same holds true for Rust.

The odds are staggeringly in its favor. Several companies already use Rust in production, including npm, Yelp, Dropbox, and others.

You can learn more about how these companies use Rust here.

Whether you’re a team of developers, students, companies, open source developers, or anyone that values speed and stability, Rust is for you.

How to approach solving a challenge during a coding interview

Like many things in life, mastery requires practice and the coding interview is n...

Do we really need to minify everything?

How to Host ASP.NET Core 3.1 Web Applications as Windows Service