Code-splitting and lazy-loading React components with Suspense and React.lazy() 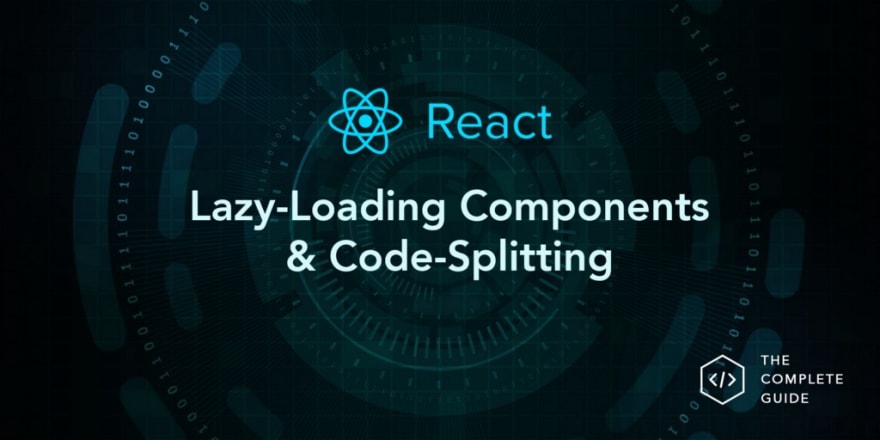 The new release of React 16.6 rolled in with some new features that can be used to add more power to React components with little amounts of effort.

Two of these new features are React.Suspense and React.lazy(), which make it very easy to apply code-splitting and lazy-loading to React components.

This article focuses on how these two new features can be used in React applications and the new potentials they open up to React developers.

Usually, each module gets imported and merged into a single file called the bundle , and then the bundle is included on a webpage to load the entire app. However, as the app grows, the bundle size starts becoming too large and hence begins to impact page load times.

Bundlers like Webpack and Browserify provide support for code-splitting , which involves splitting the code into different bundles which can be loaded on demand ( lazy-loaded ) instead of being loaded all at once, thereby improving the performance of the app.

One of the major ways of splitting code is using dynamic imports. Dynamic imports leverage on the import() syntax, which is not yet part of the JavaScript language standard but is still a proposal that is expected to be accepted soon.

Calling import() to load a module relies on JavaScript Promises. Hence, it returns a promise that is fulfilled with the loaded module or rejected if the module could not be loaded.

For older browsers, a polyfill like es6-promise should be used to shim Promise.

Here is what it looks like to dynamically import a module for an app bundled with Webpack:

When Webpack sees this syntax, it knows to dynamically create a separate bundle file for the moment library.

For React apps, code-splitting using dynamic import() happens on the fly if boilerplates like create-react-app or Next.js is being used.

However, if a custom Webpack setup is being used, then you need to check the Webpack guide for setting up code-splitting. For Babel transpiling, you also need the babel-plugin-syntax-dynamic-import plugin, to allow Babel parse dynamic import() correctly.

Several techniques have been in use for code-splitting React components. A common approach is applying dynamic import() to lazy-load Route components for an application — this is usually referred to as route-based code-splitting. 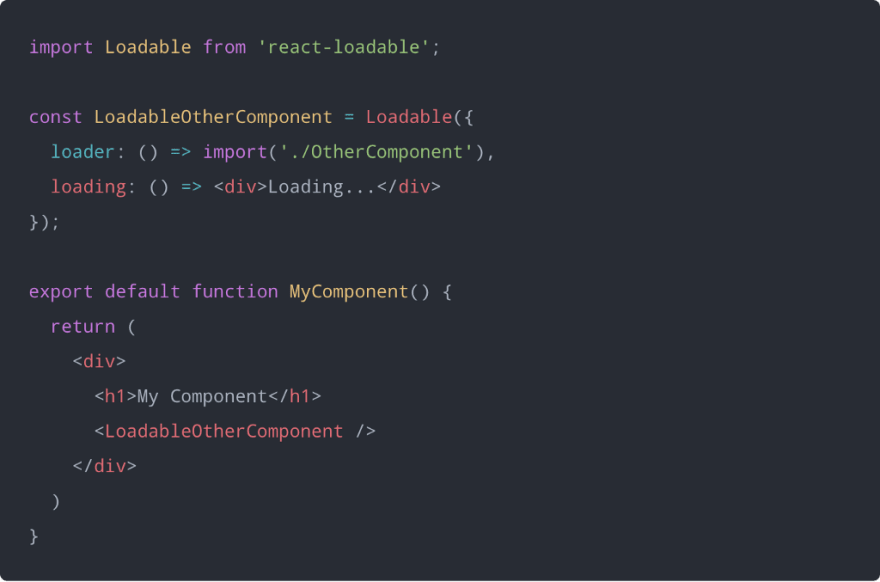 Here, you see that the component is imported using the dynamic import() syntax and assigned to the loader property in the options object.

React-loadable also uses a loading property to specify a fallback component that will be rendered while waiting for the actual component to load.

You can learn more about what you can accomplish with react-loadable in this documentation.

In React 16.6 , support for component-based code-splitting and lazy-loading has been added via React.lazy() and React.Suspense.

React.lazy() and Suspense are not yet available for server-side rendering. For server-side code-splitting, React Loadable should still be used.

React.lazy() makes it easy to create components that are loaded using dynamic import() but are rendered like regular components. This will automatically cause the bundle containing the component to be loaded when the component is rendered.

React.lazy() takes a function as its argument that must return a promise by calling import() to load the component. The returned Promise resolves to a module with a default export containing the React component. 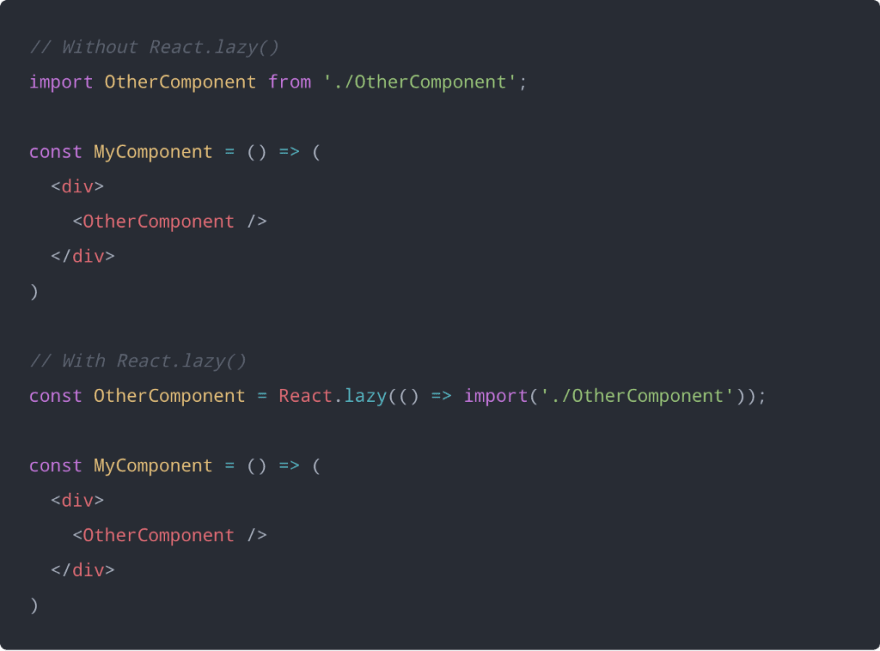 A component created using React.lazy() only gets loaded when it needs to be rendered.

Hence, there is need to display some form of placeholder content while the lazy component is being loaded — possibly a loading indicator. This is exactly what React.Suspense was created for.

React.Suspense is a component that is meant for wrapping lazy components. You can wrap multiple lazy components at different hierarchy levels with a single Suspense component.

The Suspense component takes a fallback prop that accepts the React elements you want rendered as placeholder content while all the lazy components get loaded. 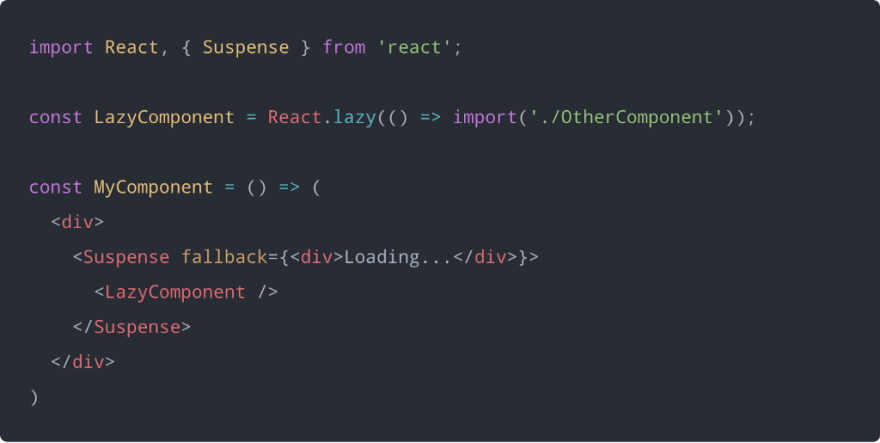 I have created a very simple demo on CodeSandbox to demonstrate using React.lazy() and Suspense for lazy-loading components.

Here is what the miniature app code looks:

The following screenshot shows a demo of what the component will look like when rendered.

At the moment, React.lazy() does not support using named exports for React components.

If you wish to use named exports containing React components, then you need to reexport them as default exports in separate intermediate modules.

Then you can now use React.lazy() to load OtherComponent from the intermediate module.

With React.lazy() and Suspense, it is now easy to perform route-based code-splitting without using any other external package. You can simply convert the route components of your app to lazy components and wrap all the routes with a Suspense component.

With the new React.lazy() and React.Suspense , code-splitting and lazy-loading React components has been made very easy.

You can start enjoying the new React features by updating to React 16.6.

If you found this article insightful, feel free to give some rounds of applause if you don’t mind.

A (Very) Beginner's Guide to WEBPACK

Brian Neville-O'Neill
Director content @LogRocket. I didn't write the post you just read. To find out who did, click the link directly above my name.
How to use RxJS with React Hooks
#react #rxjs #tutorial
Build a beautiful, draggable kanban board with react-beautiful-dnd
#react #tutorial
Getting to know the Intl API in JavaScript
#javascript