Don't know, but lets continue, I want to finish, I think this is going to be the last one. Or I'll try to make it the last one at least hahahahaha

First thing is first, we need to do a little of recap, we did some routes, make some Apollo magic in the home page, so we have 5 random characters, also we have an ugly Errors page :)

So, to finish we have to do:

Maybe we'll use useContext because I want the results of the search bar in the cardContainer.

First thing we do... it 🤯🤯🤯🤯🤯 yeppp
why? Because my computer decided to shut down before. So the changes were not fixed....

15 minutes later and realizing that we don't want useContext because we don't want to share the global variable to be displayed (rendered) in another element. That's why we don't use useContext, and that is why we want to pass the value as a prop, from one child to the other child, we do this using the "Father" element as a "Controller" of the value we want to pass.

So first is first, we prepare the "father" element which is Home, we make it use useState, this way we can keep track and update the value easily.

Now we know that the element that changes the value of the element is Search which modifies the value when the we submit or click the icon. This way we pass the prop callBack which uses the function from the useState, setT.

This way we have the new value when the button is pressed.

Next and last step is to pass the value to the one which is going to use it for the query. So that we can search a character by Name.

And that is everything, I think you have understand why we do this and why we don't use useContext. If you haven't understand it well, I'll update the post!!! So comment!!!

YUHUUUUUUU!! I love Apollo hahahhaha, I mean... is very easy and super powerful!!!

In the component cardContainer, we mostly use Apollo, so we are going to change the place of ApolloProvider just to wrap CardContainer, because nothing inside Home.jsx is going to use Apollo as well, so there is no need to have it to wrap everything.

We had some errors in the queries we saved in queries.js, those who use the variables, so the correct way to use variables inside a query with Apollo is this:

with the variable name inside the query of the name, as an argument.

So then, when we use it in the cardContainer, we use Apollo to request the query, we use the hook provided by the library called useQuery. It has multiple parameters, the one that is required, the query we can also add options like "variables", "onError", "pollInterval" that fetches each time (the one you specify) the query and much more!!!

What we want from the return are some states like loading, error and data, this way we can display components depending on the state we have.

An example with the query above:

I am no sure how I want to do this one, because I thought about:

I think I am going to do the 3rd one, because this way is easier, I just send the id of the character when the button is pressed.

For this we call react-router-dom again, and we create a route which accepts a parameter, which we are going to get in the component who will fetch the data using a query.

To create the route, is like when using express

This is everything, now using in CharInfo a hook provided from react-router-dom called useParams.

This way we can intercept that param and fetch the data with apollo.

Now we are going to use the hook from Apollo to use the query and the id and fetch the data to display it.

Instead of using the ApolloProvider, we use the option from the hook client, why we do it like this?

Once we got this, we have everything!!! Now we just need to make CSS, which I'll do later (but you will see them in this post UwU)

Before styling... I got an error while doing the basic web of the information from the character, and I got an "Internal Server Error" which was very weird (BTW I wasted like 15min with this error until I figured it out) and It all was because sometimes an attribute called "origin" was null, so this was causing all that error, which was not returning the data.... (Summary: An error in the Back)
Now I have removed that prop, so that I get no error.

Omg... this is going to be tough... F*
I hate starting, but when I have everything as I want, is like "OH MY GOOOOOODDDD, I LOVE IITTTT", then someone just come and says "What a F* shit, is that supposed to responsive?" :_(

Now, continuing with styling... I am not going to do another GIMP, sorry but don't feel like doing another :(

BUTTTT I am going to use the FIREFOX TOOLSSSS TO MAKE THE CSS AND THEN CONVERT IT INTO TAILWINDCSS CLASSES!!!! OHHHHH YEAHHH BBYYYYY. Does that make any sense?? Don't think so... but I go fast as a fart like this 😎.
(Why a fart? IDK, why not?)

I just want to show you what I have to deal with: 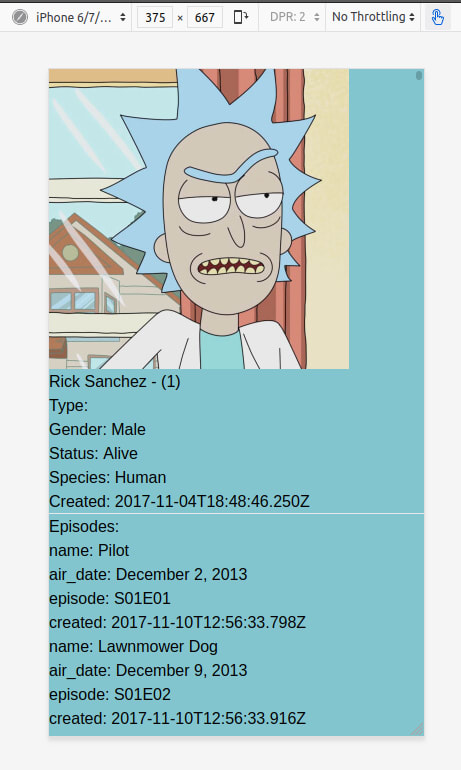 As I said, no GIMP, I am lazzy, but I'll write what I want to do, this way you know what is in my mind :O

Of course is an Array, so we are going to create a new component Episode to have everything better for my health :')

Here we have a subsection, "residents", which is an Array
of other characters, I am going to do it a single row with
horizontal scroll (What do you think?? DON'T TELL ME!!! Is
a great idea, I know, you know, we don't really know xd)
Sometimes there are a lot of residents, so this might be a
problem, but as it renders like "fast and furious", is
going to be every single character of the array rendered :)
Also, we are going to reuse the Card component.

We can upload a react project to GitHub Pages. Using the module gh-pages, we install it doing:
npm install --save-dev gh-pages

With it, we can upload it, so you can go and try it here

Tell me what else you want to learn, I'll make a series of it :D

I want to learn more things!!!

How to receive Slack notification when somebody sends a Contact form (or any form) — No code — No Backend with ActionForms.io