It is the process by which the program performs automatic memory management by reclaiming the memory occupied by objects that are no longer used in the program. An object when created uses memory which remains allocated until there are references for that object. The automatic accomplishment of freeing up memory occurs when these objects are considered not in use anymore, which is garbage collection, simply, destroying unused objects.

On the other hand, Manual Memory Management refers to the usage of instruction explicitly by programmers to deallocate the memory. In C programming, developers need to take care of memory allocation and deallocation using malloc() and deallocate() functions.

Memory Management in NodeJs is done via V8: ‘Google’s open-source high-performance JavaScript and WebAssembly engine’. The total memory allocated for program execution is Resident Set. This is further divided into the following segments 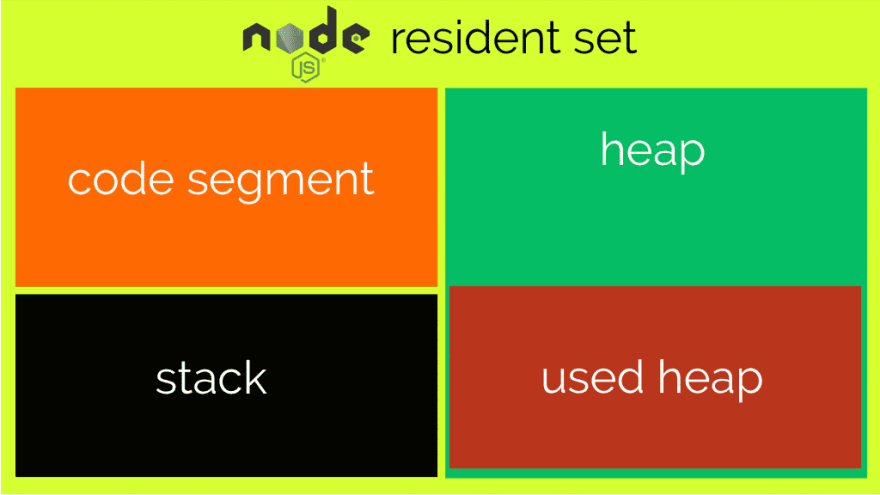 Code: The actual code being executed.

Stack: Static data including method, primitive values, and pointers defining control flow of the program and pointers to object in the heap are stored here.

It has two main sections:
New Space: The size of the new space is ~1–8MB and objects residing here are called New Generation.

After certain old space memory is allocated, expensive Garbage collection (Mark-Sweep and Mark-Compact) occur. To get basic info on memory usage in our program, let us execute the following code in NodeJs program:

Memory leakage is defined as a situation when the memory not needed by the program is not returned to the operating system or pool of free memory.

Variable originalThing is only referenced from function unused. Function unused itself gets cleaned up when replaceThing is executed. However, the second closure someMethod will not get cleaned up, as it can be referenced from theThing which is in the global scope. As we can see someMethod do not refer to originalThing at all but still, orginalThing is not garbage collected. Why? Well, the typical way that closures are implemented is that every function object has a link to a dictionary-style object representing its lexical scope.

As soon as a variable is used by any closure, it ends up in the lexical environment shared by all closures in that scope. As somemethod shares closure scope with unused, the reference unused has to originalThing forces it to stay active. This prevents its collection.

Undeclared variables in JavaScript create the new variable inside the global object.

In the case of the browser, the global object is “window”. In the NodeJs, a root node is typically the object “global” or “process”. The variable bar can never be collected as it is defined in the global scope introducing memory leakage.

The whole block inside the interval handler becomes unnecessary if the node variable is unused. The handler cannot be collected as intervals are active and cause memory leakage.

4. Out of DOM Reference

Explanation
The button element is still in the dictionary and cannot be collected by garbage collection due to the reference to the button.

Older browsers(IE6–7) were infamous for creating memory leakage as it could not handle circular reference between DOM objects and JavaScript Objects. Sometimes faulty browser extension may introduce memory leakage.

When the DOM element and its corresponding event listener don’t have the same lifecycle, it could lead to a memory leak. Caches that grow unbounded size can result in high memory consumption and can lead to memory leakage. Garbage Collection Mechanism

The size of old space may exceed hundreds of MegaBytes and less frequent mark-sweep and mark-compact run over this space. The behavior of program and old space size shifts this garbage collection. Simply, objects are marked as “alive” or “dead” and the “dead” objects are removed followed by compacting memory for optimization.

Compact Phase: Memory organization proceeds in this phase for faster memory access, migrating objects from fragmented pages to the beginning of the memory region.

It deploys parallel, incremental, and concurrent mechanisms in order to free the main thread.

Parallel: Still, Stop-the-world mechanism, where helper threads are introduced and roughly do equal amounts of work at the same time. The total pause time is divided by the number of threads introduced (plus some synchronization time).

Concurrent: The main thread is totally free to execute Javascript and helper threads to Garbage collection in the background.

Lazy/Incremental: This proceeds in a series of incremental pauses where the small part of the total work required is proceeded at once. The total amount of time spent in the main thread is not reduced, however, it spreads over time.

Let us start our application in inspection mode:

On the Chrome browser open:

This view is particularly helpful for tracking down DOM leaks. When the elements have been removed from DOM but their memory is retained due to reference in Javascript it causes DOM leakage. For source code refer here.

It is used to record and compare two (or more) memory snapshots and perform the comparison. Presence of delta in freed memory and reference count lets you confirm the presence and cause of memory leak which can be further drilled down:

Containment View provides a better view of object structure allowing to dive into a low level.

Dominators View helps confirm that no unexpected references to objects are still hanging around (i.e that they are well contained) and that deletion/garbage collection is actually working.

Load the snapshot file in the Chrome Browser and proceed analysis as before.

Allocation over time series can be viewed through allocation profiling. Select the allocation instrumentation on timeline .

The blue bars show up representing new memory allocations which are a candidate for your memory leakage. Click on the blue line to view the details on allocation profiling occurring at that time.

The blue line indicates javascript heap memory and the range consumed by the program within the sampling period is also specified. When clicked in the section of the broken blue line (memory usage), it is showing either Major GC and minor GC. As we can see that minor GC is occurring frequently than major GC.

The Greenline indicates the number of HTML nodes in the document. This increased HTML nodes in the program indicate the possibility of unreferenced DOM nodes that it is unable to be collected by GC causing memory leakage.

🛑🛑 How to Learn Automation Testing for Beginners?

The dev.to project with GatsbyJS-29