That's right! request, one of the top and oldest npm packages, has been deprecated by @mikeal its creator. 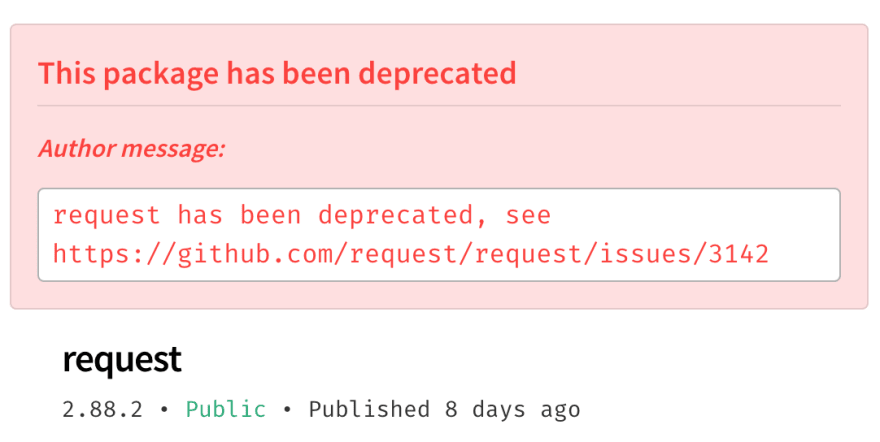 As of writing, over 40K packages rely on request. In fact, it's the 4th most depended upon package on npm. And it has a whopping 18.5 million weekly downloads.

For the most familiar with the package's development, there's no news here. request was in maintenance mode since March 2019 (see issue #3142). And deprecating the package is just one step further.

Still, it is, I believe, a truly courageous and clever step toward the future of the Node.js (and more broadly the JavaScript) ecosystem.

Let's review what led to this situation.

Without paraphrasing too much @mikeal statement back from March 2019, here are the key points that led to this deprecation:

"The place request has in the Node.js ecosystem is no longer one of an innovator but of an incumbent." @mikeal

That's right that most tutorials, even here on DEV, use request as the per-default HTTP client - while there are dozens of very good alternatives.

"The best thing for these new modules is for request to slowly fade away, eventually becoming just another memory of that legacy stack." @mikeal

That's the very first time that I see such a humble position. It's truly clever. And while it's going to require 40K+ packages to be upgraded, that's totally worth it.

Bearer.sh
The #1 platform to start your Privacy by Design journey.