Organization: Speed and number of iterations

Risk and complexity: Blast radius and impact of failed deployment

For example, organizations operating applications that are based on the microservices architecture pattern could have smaller environment boundaries because of the loose coupling and well-defined interfaces between the individual services.

Organizations running legacy, monolithic apps can still leverage blue/green deployments, but the environment scope can be wider and the testing more extensive.

Regardless of the environment boundary, you should make use of automation wherever you can to streamline the process, reduce human error, and control your costs.

There are three ways traffic can be shifted during a deployment on Amazon Elastic Container Services (Amazon ECS).

This provides the ability to perform canary analysis where a small percentage of production traffic is introduced to a new environment. You can test the new code and monitor for errors, limiting the blast radius if any issues are encountered. It also allows the green environment to scale out to support the full production load if you’re using Elastic Load Balancing(ELB), for example. ELB automatically scales its request-handling capacity to meet the inbound application traffic; the process of scaling isn’t instant, so we recommend that you test, observe, and understand your traffic patterns. Load balancers can also be pre-warmed (configured for optimum capacity) through a support request.

Swap the Auto Scaling Group Behind the Elastic Load Balancer

Swap the Environment of an Elastic Beanstalk Application

Use the following procedure to promote the green environment to serve production traffic.

Clone a Stack in AWS OpsWorks and Update DNS 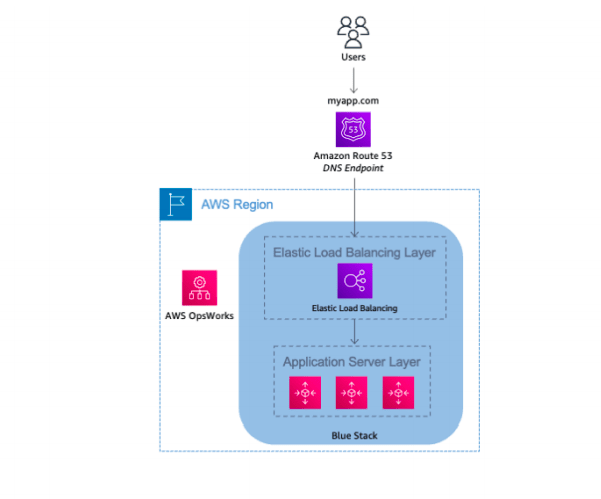 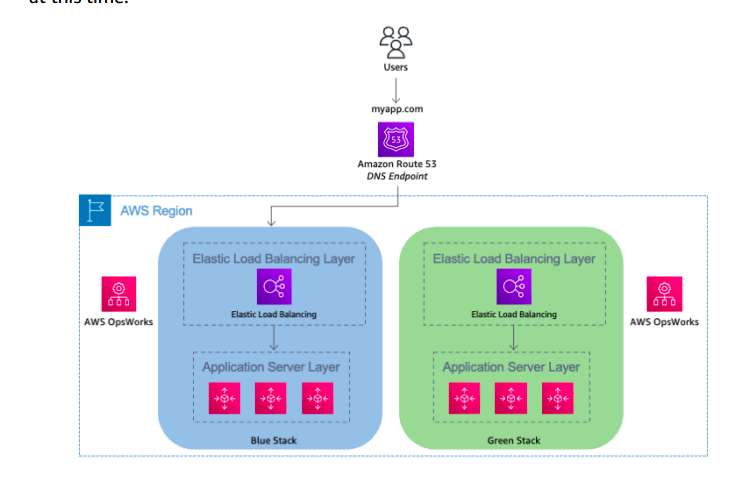 Both the blue and green environments need up-to-date data:

Broadly, you accomplish this by having both the green and blue environments share the same data stores. Unstructured data stores, such as Amazon S3 object storage, NoSQL databases, and shared file systems are often easier to share between the two environments.

Structured data stores, such as RDBMS, where the data schema can diverge between the environments, typically require additional considerations.

A general recommendation is to decouple schema changes from the code changes. This way, the relational database is outside of the environment boundary defined for the blue/green deployment and shared between the blue and green environments. The two approaches for performing the schema changes are often used in tandem:

There’s an increased risk involved when managing schema with a deletive approach: failures in the schema modification process can impact your production environment.

Your additive changes can bring down the earlier application because of an undocumented issue where best practices weren’t followed or where the new application version still has a dependency on a deleted field somewhere in the code.

To mitigate risk appropriately, this pattern places a heavy emphasis on your pre-deployment software lifecycle steps.

Be sure to have a strong testing phase and framework and a strong QA phase.

Performing the deployment in a test environment can help identify these sorts of issues early, before the push to production.

When Blue/Green Deployments Are Not Recommended

Are your schema changes too complex to decouple from the code changes? Is sharing of data stores not feasible?

In some scenarios, sharing a data store isn’t desired or feasible. Schema changes are too complex to decouple. Data locality introduces too much performance degradation to the application, as when the blue and green environments are in geographically disparate regions. All of these situations require a solution where the data store is inside of the deployment environment boundary and tightly coupled to the blue and green applications respectively.

This requires data changes to be synchronized—propagated from the blue environment to the green one, and vice versa. The systems and processes to accomplish this are generally complex and limited by the data consistency requirements of your application. This means that during the deployment itself, you have to also manage the reliability, scalability, and performance of that synchronization workload, adding risk to the deployment.

Does your application need to be deployment aware?

Many commercial software vendors provide their own update and upgrade process for applications which they have tested and validated for distribution. While vendors are increasingly adopting the principles of immutable infrastructure and automated deployment, currently not all software products have those capabilities.

Working around the vendor’s recommended update and deployment practices to try to implement or simulate a blue/green deployment process may also introduce unnecessary risk that can potentially negate the benefits of this methodology.

Application deployment has associated risks. However, advancements such as the advent of cloud computing, deployment and automation frameworks, and new deployment techniques, blue/green for example, help mitigate risks, such as human error, process, downtime, and rollback capability.

The AWS utility billing model and wide range of automation tools make it much easier for customers to move fast and cost-effectively implement blue/green deployments at scale.

How Python Helps Accountants Use Excel