Amazon CloudFront is a content delivery network (CDN) service, a network of interconnected servers that is geographically closer to the users and reaches their computers much faster. Amazon CloudFront reduces latency by delivering data through 410+ globally dispersed Points of Presence (PoPs) with automated network mapping and intelligent routing.

We are adding HTTP version 3.0 (HTTP/3) support for Amazon CloudFront. HTTP/3 uses QUIC, a user datagram protocol-based, stream-multiplexed, and secure transport protocol that combines and improves upon the capabilities of existing transmission control protocol (TCP), TLS, and HTTP/2. Now, you can enable HTTP/3 for end user connections in all new and existing CloudFront distributions on all edge locations worldwide, and there is no additional charge for using this feature.

Benefits of HTTP/3 on CloudFront
Our customers always want to provide faster, more responsive and secure experience on the web for end users. HTTP/3 provides benefits to all CloudFront customers in the form of faster connection times, stream multiplexing, client-side connection migration, and fewer round trips in the handshake process to reduce error rates.

QUIC connections over UDP support connection reuse with a connection ID independent from IP address/port tuples so users have no interruption or impact. Customers operating in countries with low network connectivity will see improved performance from their applications.

CloudFront’s HTTP/3 support provides enhanced security built on top of s2n-quic, an open-source Rust implementation of the QUIC protocol added to our set of AWS encryption open-source libraries, both with a strong emphasis on efficiency and performance.

If you enable HTTP/3 in CloudFront distributions, the users can make HTTP/3 viewer request to CloudFront edge locations. Past the edge location, we have highly reliable networks within AWS Cloud and CloudFront will continue to use HTTP/1.1 for origin fetches. So, you don’t need to make any server-side changes in order to make your content accessible via HTTP/3.

How to Enable HTTP/3
To enable HTTP/3 connection, you can edit the distribution configuration through the CloudFront console. You can select HTTP/3 in Supported HTTP versions on an existing distribution or create a new distribution without any changes to origin. 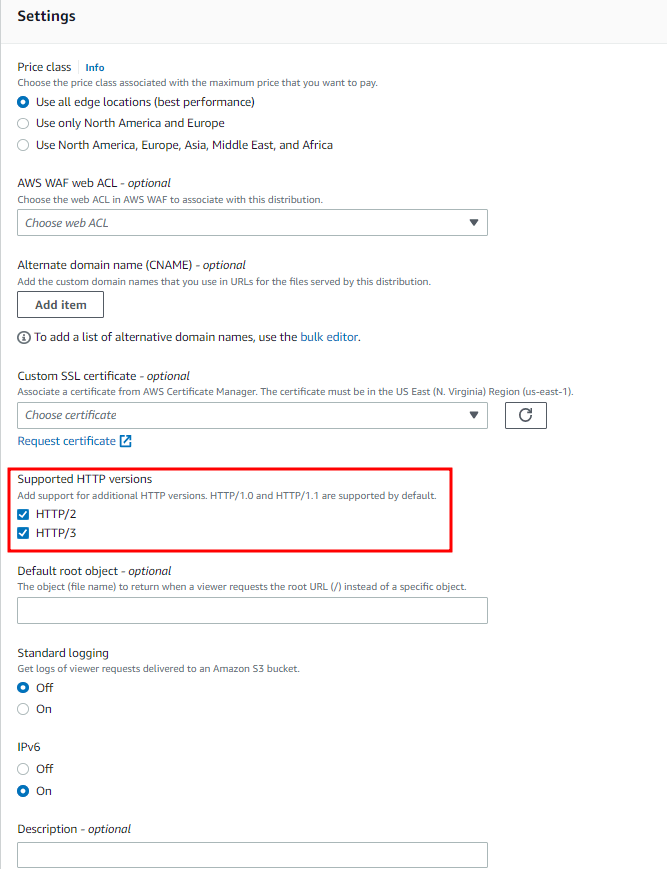 After deploying your distribution, you can connect with a browser that supports HTTP/3, such as the latest version of Google Chrome, Mozilla Firefox, and Microsoft Edge, and Apple Safari after turning it on manually. Can i use HTTP/3 Support page.

You can test HTTP/3 support to Curl from the command line:

Additionally, HTTP/3 provides enhanced security as it uses QUIC which encrypts the TLS handshake packets by default. CloudFront customers that have enabled HTTP/3 on their distributions have seen up to 10% improvement in time to first byte, and up to 15% improvement in page load times. Customers have also observed reliability improvements as handshake failures reduced when they enabled HTTP/3 on their distributions.

Supported HTTP versions
Choose the HTTP versions that you want your distribution to support when viewers communicate with CloudFront.

For viewers and CloudFront to use HTTP/2, viewers must support TLSv1.2 or later, and Server Name Indication (SNI).

For viewers and CloudFront to use HTTP/3, viewers must support TLSv1.3 and Server Name Indication (SNI). CloudFront supports HTTP/3 connection migration to allow the viewer to switch networks without losing connection.

AWS Console Dark mode is ON

Once unpublished, this post will become invisible to the public and only accessible to Learn2Skills.