In this part you are going to learn how to automate the build, package and deploy commands by creating a continous delivery pipeline using AWS Code Pipeline. 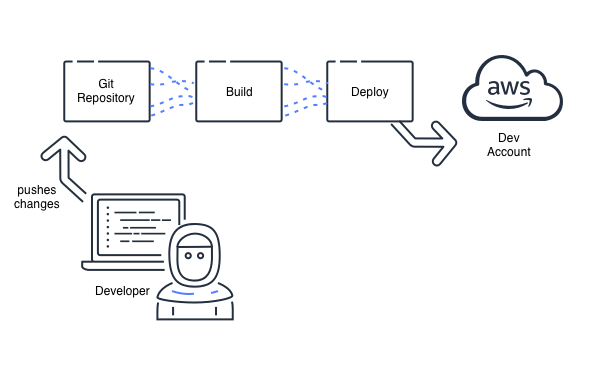 The services used are in this part:

Any CI/CD pipeline starts with a code repository.

In this workshop we use AWS CodeCommit for ease of integration, but you could use other source code integrations, like GitHub for example.

Run the following command from your terminal to create a new CodeCommit repository:

You should see the following output. Copy the value of cloneUrlHttp, you will need it later.

One of the cool things about CodeCommit is the support for IAM authentication. And if you are running this workshop from a Cloud9 workspace, you can leverage the fact that your terminal is already pre-authenticated with valid AWS credentials.

Configure the git client with username and email, so your commits have an author defined.

Copy/paste the following lines at the end of the sam-app/.gitgnore file.

There is no need to track the .aws-sam directory or the packaged.yaml under version control as they are re-generated on every build.

From the root directory of your sam-app project, run the following commands:

Add your CodeCommit repository URL as a remote on your local git project.

Navigate to the AWS CodeCommit console, find your sam-app repository and click on it to view its contents.

Make sure your code is there. You should see a screen like the following: 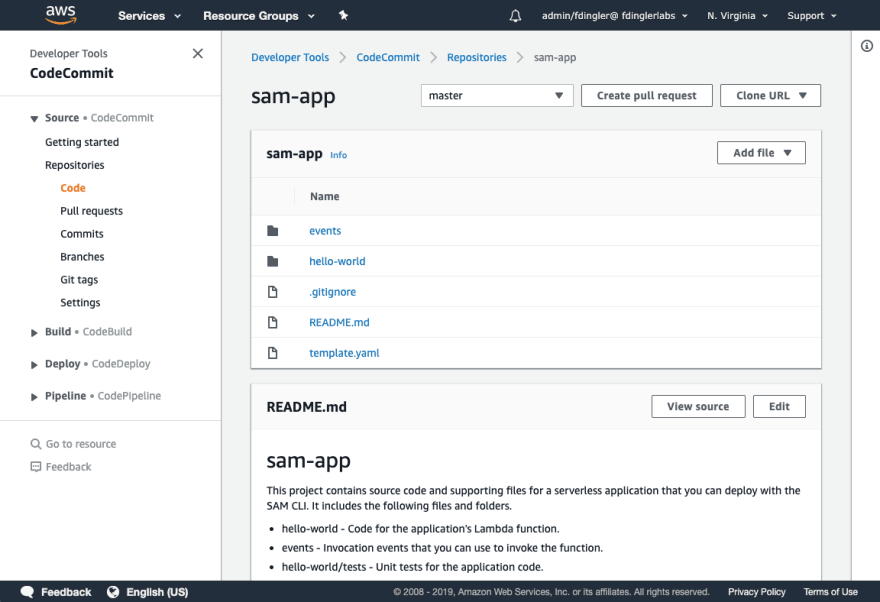 HOW TO BUILD A PIPELINE

The best way to automate the creation of CI/CD pipelines is by provisioning them programmatically via Infrastructure as Code.

This is specially useful in a microservices environment, where you have a pipeline per microservice, which potentially means dozens of pipelines, if not more.

Having an automated way to create these pipelines enables developers to create as many as necessary without building them manually from the console every time.

Different mechanisms are used for creating pipelines programmatically. Nowadays developers have many choices to pick from, but the most common ones we see are the following:

In this workshop, we are going to use the AWS Cloud Development Kit (also known as CDK), as the pipeline vending mechanism.

The AWS CDK is a software development framework for defining cloud infrastructure in code and provisioning it through AWS CloudFormation.

That’s right! You can describe your infrastructure by writing code in TypeScript, C#, Python or Java.

Your code is then synthesized into CloudFormation and using the CDK CLI you can deploy it to an AWS account.

How do SAM and CDK play together?

Serverless developers use the SAM framework to define their applications, SAM CLI to build them and deploy them and AWS CDK to provision any infrastructure related resources, like their CI/CD Pipeline.

The nice thing about these tools is that they all share a common ground: CloudFormation.

Now, let’s create a folder within our sam-app directory where the pipeline code will reside.

Initialize a new CDK project within the pipeline folder by running the following command:

Now install the CDK modules that we will be using to build a pipeline:

At this point, your project should have the structure below (only the most relevant files and folders are shown).

Within the CDK project, the main file you will be interacting with is the pipeline-stack.ts. Don’t worry about the rest of the files for now.

Open the file lib/pipeline-stack.ts in your Cloud9 workspace. It is empty at the moment, but here is where you will be adding code to build your CI/CD pipeline. 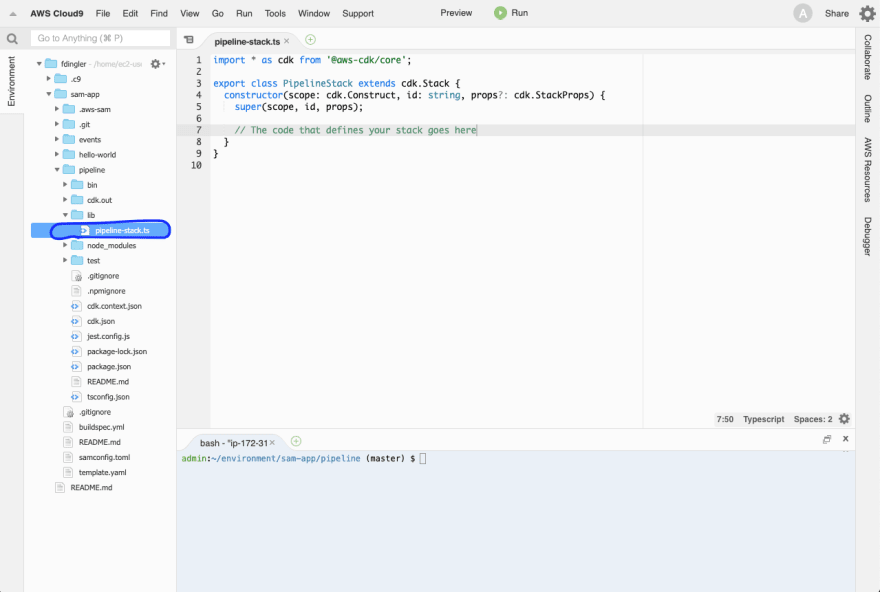 Even though we haven’t wrote any code yet, let’s get familiar with how to build and deploy a CDK project, as you will be doing it multiple times in this workshop and you should get comfortable with the process. Start by building the project with the following command:

After the build has finished, go ahead and deploy the pipeline project by using the CDK CLI:

A new CloudFormation stack was created in your account, but because your CDK project is empty, the only resource that was created was an AWS::CDK::Metadata.

Every Code Pipeline needs an artifacts bucket, also known as Artifact Store. CodePipeline will use this bucket to pass artifacts to the downstream jobs and its also where SAM will upload the artifacts during the build process.

Let’s get started and write the code for creating this bucket:

Make sure you are editing the pipeline-stack file with .ts extension

Easy right? Now build and deploy the project like you did it earlier:

If you get a build error, check that all the @aws-cdk dependencies in the package.json file have the same version number, if not, fix it, delete the node_modules folder and run npm install.

The output will show that the S3 bucket got created:

The Source Stage is the first step of any CI/CD pipeline and it represents your source code. This stage is in charge of triggering the pipeline based on new code changes (i.e. git push or pull requests). In this workshop, we will be using AWS CodeCommit as the source provider, but CodePipeline also supports S3, GitHub and Amazon ECR as source providers.

Append the following code snippet after your bucket definition in the pipeline-stack.ts file:

Notice how we define an object sourceOutput as a pipeline artifact; this is necessary for any files that you want CodePipeline to pass to downstream stages.

In this case, we want our source code to be passed to the Build stage.

Don’t do a cdk deploy just yet, because a pipeline needs to have at least 2 stages to be created. Lets continue to the next page to add a Build stage first.

The Build Stage is where your Serverless application gets built and packaged by SAM. We are going to use AWS CodeBuild as the Build provider for our pipeline.

It is worth mentioning that CodePipeline also supports other providers like Jenkins, TeamCity or CloudBees.

AWS CodeBuild is a great option because you only pay for the time where your build is running, which makes it very cost effective compared to running a dedicated build server 24 hours a day when you really only build during office hours.

It is also container-based which means that you can bring your own Docker container image where your build runs, or use a managed image provided by CodeBuild.

Let’s go ahead and add a Build stage to you pipeline-stack.ts:

From your terminal, run the following commands to deploy the pipeline:

Navigate to the AWS CodePipeline Console and click on your newly created pipeline! 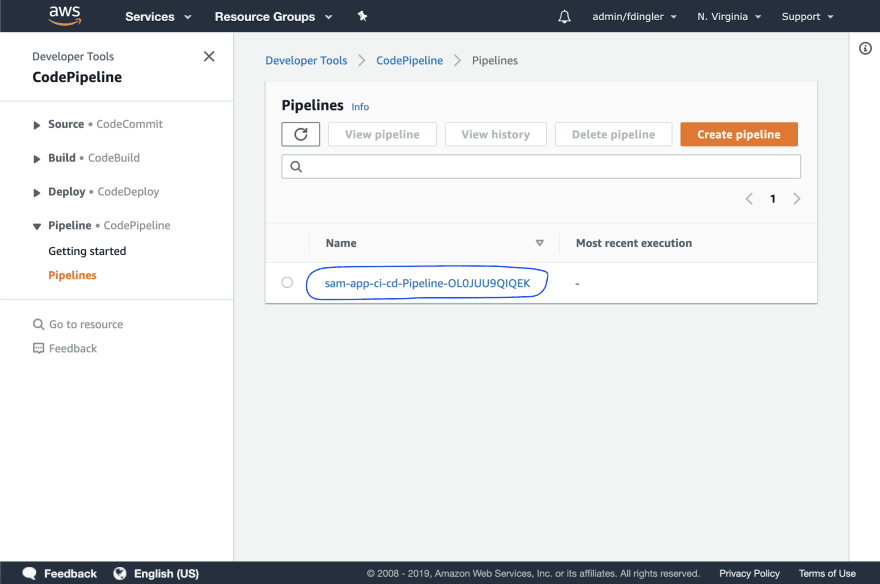 The Build step should have failed. Don’t worry! this is expected because we haven’t specified what commands to run during the build yet, so AWS CodeBuild doesn’t know how to build our Serverless application. 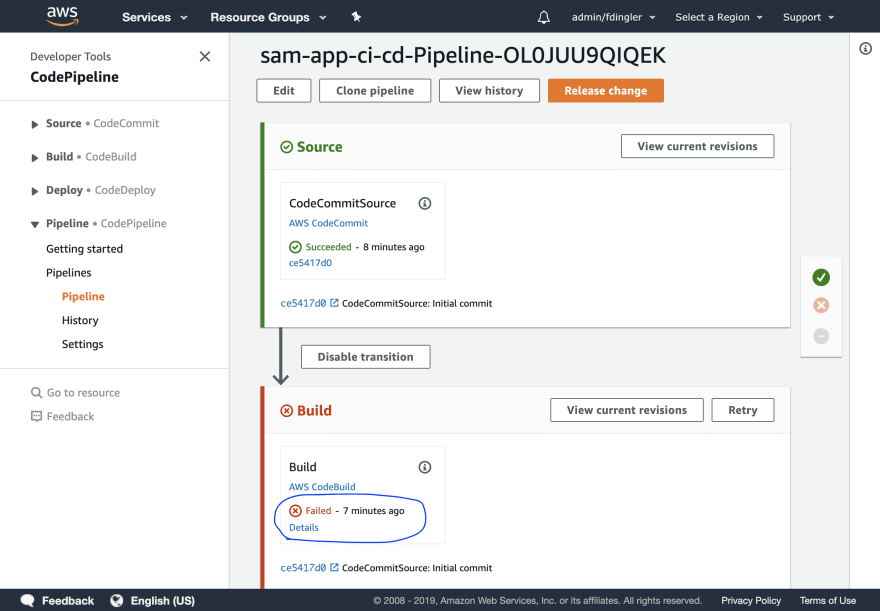 A Buildspec File is a series of commands in YAML format that CodeBuild executes to build your application.

This file is placed in the root folder of a SAM application and CodeBuild will automatically find it and run it during build time.

In the root folder of app, create file named "buildspec.yml" and paste the following in it:

Take a moment to understand the structure of the file and feel free to read the Buildsec Reference here:

Commit your changes and push them to the repository.

Navigate to your CodePipeline again, and wait for it to trigger automatically. This time the build will succeed: 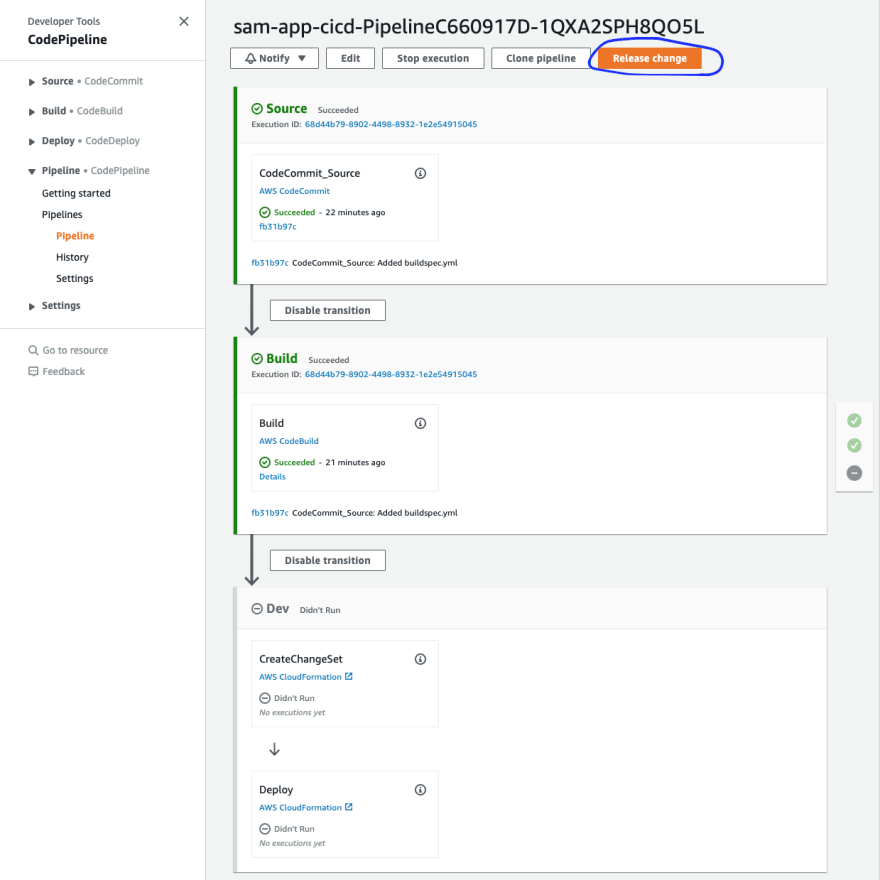 The Deploy Stage is where your SAM application and all its resources are created an in an AWS account.

The most common way to do this is by using CloudFormation ChangeSets to deploy. This means that this stage will have 2 actions: the CreateChangeSet and the ExecuteChangeSet.

Add the Deploy stage to your pipeline-stack.ts:

On your terminal, run the following commands from within the pipeline directory:

Navigate to your pipeline and you will see the Deploy stage has been added, however, it is currently grayed out because it hasn’t been triggered. Let’s just trigger a new run of the pipeline manually by clicking the Release Change buttton. 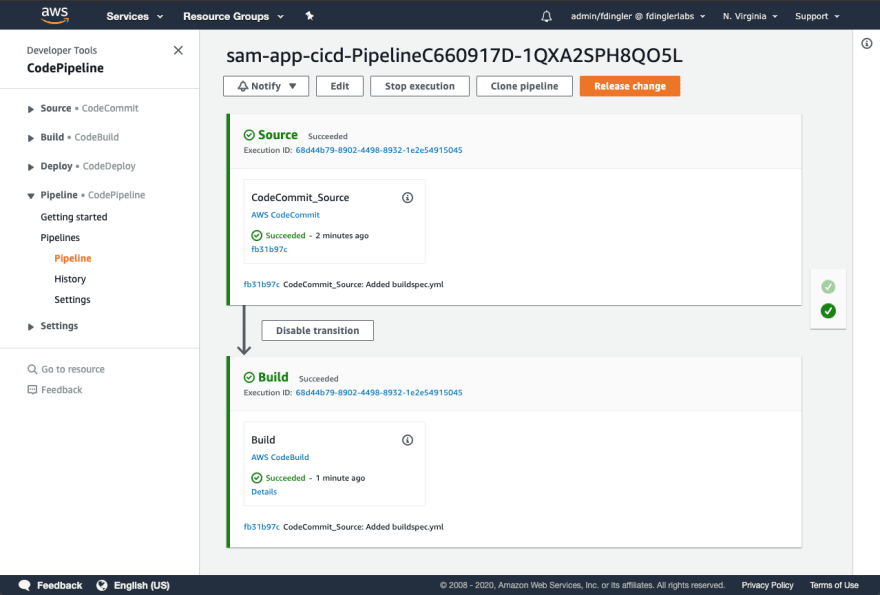 In the terminal, run the following commands from the root directory of your sam-app project.

Congratulations! You have created a CI/CD pipeline for a Serverless application!

Cloud Agnostic, Multi-Cloud, Hybrid Cloud: What's the difference and when would you use each?